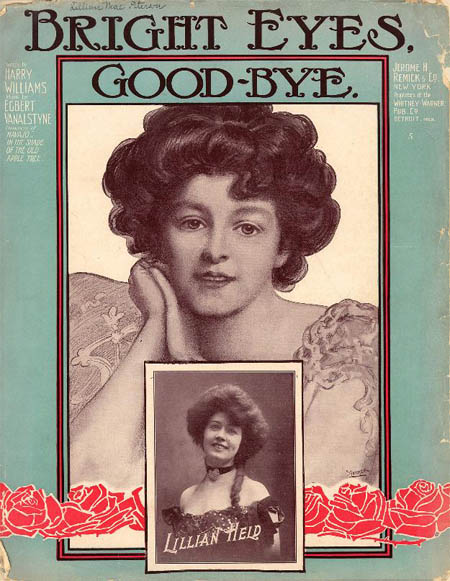 Print music peaked relative to other print revenue about 1919, well after the development of media for the mechanical reproduction of music. Sheet music output grew tremendously from 1890 to 1919.  Media and machines for the mechanical reproduction of music also grew strongly from the end of the nineteenth century to 1919.[2] In 1919, 107 million recorded disks and cylinders were produced.  In 1919, 54% of pianos produced were mechanically powered (self-playing).[3]  The nominal price of sheet music was much cheaper than that of recorded music and player pianos.  The nominal price of sheet music, of course, does not include the cost of learning to read it and to make high-fidelity music from it.  On the other hand, anyone can try to sing and may well enjoy the activity even without high-quality results.  Moreover, sheet music included visually attractive covers and probably was an object of common discussion. Sheet music revenue actually rose relative to recordings revenue across the 1920s.  Increasing general interest in music, along with wealth and media-nominal-cost disparities, probably accounts for sheet music increasing in popularity along with the early development of mechanical reproduction of music.

Despite large declines in the real cost of recorded music, U.S. music industry print revenue relative to newspaper, periodical, and book industries print revenue has been surprisingly large in recent years.  In 1890, when almost no one had access to mechanically reproduced music,  print music industry revenue (sheet music and music books sold at wholesale) was 0.8% of newspaper, periodical, and book (wholesale book publishing) industries revenue. This figure rose to 1.5% in 1919. In 2007, sheet music and music books generated $1.7 billion in wholesale revenue.  That amount is 1.7% of newspaper, periodical, and book print revenue.[4] Print music today plays no part  in popular culture, but, relative to other print, it generates revenue comparable to that in the late nineteenth and early twentieth centuries.

[2] On sheet music sales, see first paragraph above, and sheet music sales figures in the 1889-1935 datasheet.  The best-selling sheet music from 1902 to 1907 sold about 700,000 copies.  See Goldberg (1930) p. 219.  Sales by media for four Irving Berlin hit songs suggests a declining share of sheet music sales relative to recordings from 1919 to 1921.  Other evidence also suggests increasing importance of disk recordings.  In 1919, a recording of the song “Dardanella” sold almost a million copies, while the leading song in the following year, “Whispering”, sold over two million recordings.  See Tawa (2005) p. 23. In addition, radio broadcasting began with  broadcasting music in 1920.  The share of households owning a radio grew strongly across the 1920s to reach 39% in 1930.  After 1929, both sheet music and recorded music wholesale revenue dropped sharply.

[3] See the music media and piano datasheets for the relevant data.