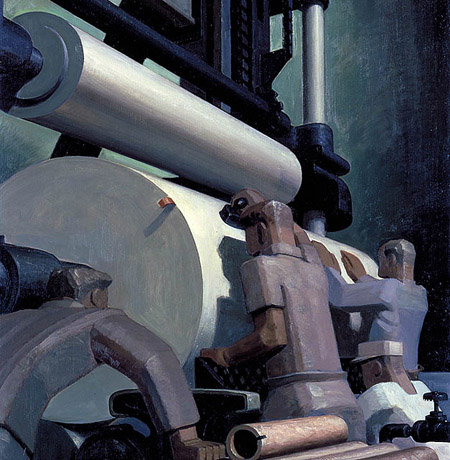 Compared to periodicals, newspapers have developed a business model much less propitious for profitably distributing content in a digital world.  Most of newspapers’ revenue historically has come from newspaper establishments integrated with the business of printing.  A much larger share of periodicals’ revenue has come from publishing establishments not integrated into printing.  Accounting for frequency of issues, newspapers produce much more, lower quality printed paper than do periodicals.  Given the greater weight of paper in their business, newspapers had a stronger incentive than periodicals to invest in paper-distribution systems.  Not surprisingly, newspapers developed special newspaper delivery networks, but periodicals did not.  Newspapers have developed a romance of journalism.  However, the newspaper business historically has been mainly about cheaply printing and rapidly distributing a large amount of paper.

Content-creation businesses in the future will be more like periodicals than newspapers. Cheaply printing and rapidly distributing  large amounts of paper will remain a viable business.  It’s now the business of companies like FedEx Kinkos.  Future content-creation businesses probably won’t be tightly integrated with particular media and distribution systems.  With appreciation for the businesses of general-interest periodicals in the past, future creators of general-interest content can aspire to having about half of their revenue coming from subscriptions and sales. Of course, just as for periodicals, many will fail.  The periodical business has much greater entry and exit of firms than the newspapers business does. In this way, too, digital content businesses will be more like periodicals than newspapers.

* *  *  *  *
Data note:   In the U.S. in 1939, 99% of newspaper revenue came from newspaper publishing establishments also engaged in printing.  For periodicals, the corresponding figure is 43%. The data are available and sourced in the newspapers and periodicals business integration spreadsheet.  From 1960 to 1979, the average number of pages per issue of daily newspapers rose from 43 pages to 64 pages.  In 1979, advertising content accounted for 64% of newsprint in newspapers.  See the U.S. Statistical Abstract for 1980, Table 1007. Here’s a spreadsheet with data on newspapers’ and periodicals’ revenue structure from 1880 to 2007. It is also available as an Excel file.