Jacob of Serugh recounted a story about some youths from Ephesus in a homily early in the sixth century.  That story spread widely by early in the seventh century.  Themes of the story are shunning false gods, faithfulness despite persecution and hardships, God’s care for believers, resurrection of the dead, and the future godly world.  Controversy arose over story details: the number of youths, the youths’ names, the number of years that they slept, their dog’s name, and their dog’s color. Endless arguments over pointless issues seems to be a deep characteristic of mass communication.

Written works and visual works offer different possibilities in factual disputes.  Regarding the number of youths, the Qur’an (18:22) states:

Paintings of the companions of the cave became popular among Christians and Muslims. Unlike verbal accounts, such a painting necessarily takes a position on the number of companions in the cave.  Both the Christian and Islamic story traditions converged on seven sleepers in the cave.[1]  Visual images easily remained blank about the names of the sleepers and how long they slept.  These details continued to be verbally disputed.[2]

The dog’s color and name remained disputed details in different senses.  Jacob of Serugh’s homily didn’t mention a dog.  However, his homily stated that God cared for the youths in the cave:

The Lord saw the faith of the beloved lambs,
and He came to give a good wage for their recompense.
He took their spirits and brought them up to heaven,
and He left a watcher to be the guardian of their limbs.[3]

The figure of the watcher wasn’t specified.  The Qur’an, however, describes “their dog stretching forth his two fore-legs on the threshold” (18:18).  Islamic tradition records controversy over the dog’s color and the dog’s name :

“…Muhammad, my beloved one, told me [‘Ali] that the dog was piebald with black, and his name was Qitmir.”

The Master said that scholars have differed about the color of the dog of the People of the Cave.  Ibn ‘Abbas said that it was spotted; Muqatil said that it was yellow; Muhammad b. Ka’b that because of its deep redness and yellowness it shaded into red; al-Kalbi said that its color was like snow. Some said, the color of a cat; others, the color of heaven. They also differed about its name. It has been related from ‘Ali that its name was Rayyan, but Ibn ‘Abbas said it was Qitmir, and this is one of the tales of from ‘Ali.  Shu’ayb al-Juba’i said that its name was Hamra, and al-Awza’i that it was Natwa. Ibn Fathawayh has informed us, on the authority of Abu Hanifa, that the name of their dog was Qitmur, others say Qitfir.  Abu ‘Ali al-Zuhri told me, transmitting it from Ibn ‘Abbas regarding His word, “It is few that know,” (18.22) … the dog’s name was Qitmir, a spotted dog, bigger than a Qalati, and smaller than a Karaki.[4]

While a painting can easily have no position on the dog’s name, a color-painted image, unlike a verbal account, necessarily has a particular color for the dog.  Yet the history of colored images shows that the colors used often were not significant. That seems to have been the case in the Islamic tradition of the “Companions of the Cave”. From sixteenth and seventeenth century Iran and Turkey, “Campanion of the Cave” images show a brown dog, a white dog with light golden spots, an all-white dog, and a dog with a darker color value than the painting’s white.[5]  The dog’s color seems to have remained a disputed detail. 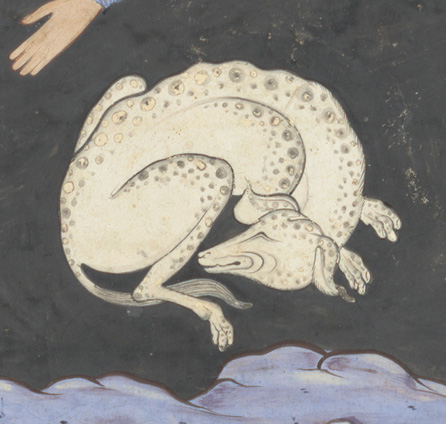 The sixteenth-century Persian dispersed Falnama demonstrates vigorous assertion of disputed details.  A Falnama pairs an image with an augury text.  The dispersed Falnama’s “Companions of the Cave” image shows seven sleepers and a dog.  The dog is white with light golden spots.  The associated augury text declares:

O augury user, know that the cavern of the People of the Cave and the sign of the sheepdog that accompanied them (according to the theologians and historians, the name of that dog is recorded as Qitmir) and the pursuit by the king of the age Daqyanus [Decianus, a Latin form for Decius] and their abiding in secure and tranquil protection and being rescued from the wickedness of the enemy have appeared in your augury.[6]

Even apart from the parenthetical specification of the dog’s name, the description of the image is longer than usual in augury texts.  The parenthetical text doesn’t mention that number of sleepers, which was a disputed issue among the Qur’an’s first audience.  It doesn’t mention the color of the dog, a point of disagreement in sixteenth-century Iran and a point directly relevant to the painting. Asserting the name of the dog in the augury seems like petty, scholarly point-scoring.  But it’s also an enduring practice of mass communication.

For some related discussion, see my review of the Sacker Gallery’s exhibition, Falnama: Book of Omens.

[1] Tabarī , a pioneering early-tenth-century Islamic historian, recorded nine sleepers.  See Brinner (2002) p. 696, n. 4. However, Milstein (1998) p. 152, notes that among a collection of twenty-one illustrated, sixteenth-century “Stories of the Prophets” (Qiṣaṣ al-anbiyā ̓) manuscripts, all depict seven young men.  The sixteenth-century, Persian dispersed Falnama, the sixteenth-century Topkapı Persian Falnama, and sixteenth-century Safavid-Ottoman Dresden Falnama all depict seven companions in the cave.  In the Christian tradition, the story became known as the “Seven Sleepers of Ephesus.”  Hence the disputed number of sleepers was transformed into an identifying description.

[2] Tabarī and al-Thaʻlabī, an eleventh-century Islamic scholar, have different names.  See Brinner (2002) pp. 694, 696, inc. n. 4., 712. Id., p. 696 n. 4, also lists different names in the Christian story tradition.  For an additional set of different names in the thirteenth century, see the Seven Sleepers in Jacobus de Voragine’s Golden Legend.  Voragine reports claims that they sleep 362 years and asserts instead that they slept 208 years.  On the sixth-century dispute over years slept, see Griffith (2006) p. 129.  Recognizing the disputes over years in the cave, the Qur’an declares, “(Allah) knows best how long they stayed” (18:26).

Griffith, Sydney. 2007. “Christian Lore and the Arabic Qur’an: The ‘Companions of the Cave’ in Surat al-Kahf and in Syriac Christian Tradition,” in Gabriel Said Reynolds, ed., The Qur’an in its Historical Context. New York: Routledge, pp. 109-40.

2 thoughts on “youths of Ephesus & a dog: sensuous varieties of factual disputes”