Today, even on the Internet, horoscopes consists of a few brief sentences.  That’s a form auspicious for the economics of print newspapers.  Print newspapers are now dying.  For horoscopes in new media, the future offers much broader sensory possibilities. 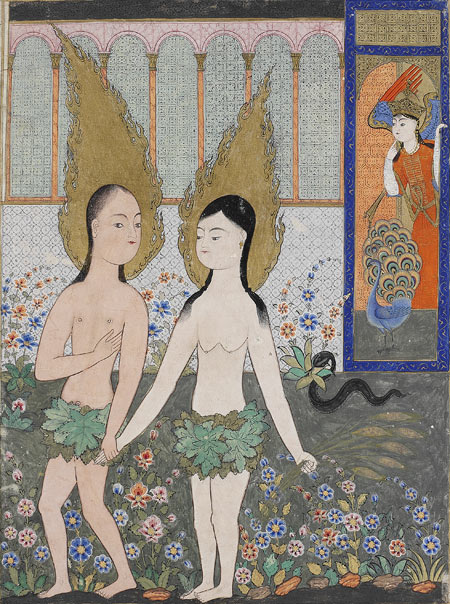 “Take an augury.  See what your desire is.  See the shape of your beginning and end.” So states the introduction to a Falnama, a book of omens, created as a gift for the Ottoman Sultan Ahmed I about 1615.  In the largely scribal cultures of Ottoman Turkey and Safavid Iran in the sixteenth and early seventeenth centuries, large, expensive books used for divination focused on images.  The Sackler Gallery’s ongoing exhibition, Falnama: Book of Omens, along with the scholarly, beautiful exhibition catalog, presents these fortune-showing books.[1]

The construction of the books prioritizes seeing.  Like the Hamzanama of Akbar, these monumental Falnamas have large images framed to form complete pages.  The books open to an image on the right page and text on the left page.  Since reading in Persian and Turkish progresses from right to left, the image is read before the text.  Visually, the images are colorful and ornate.  The texts on the facing pages are also highly decorative. At least with these books, taking an augury was an impressive sight.

Consider, for example, the above image of Adam and Eve expelled from paradise.  It is from the Topkapı Persian Falnama, attributed to the last quarter of the sixteenth century and to a Shi’i artistic center outside of the Safavid royal court.[2]  The figures of Adam and Eve contrast expressively.  Adam is in confident motion; Eve is stationary and concerned.  Eve has the same flesh-tone as the angel in the doorway on the upper right of the image, and she gazes dejectedly downward.  Adam, in contrast, has a darker, more earthly tone, and he gazes confidently out on the world. Adam’s smoothly curving hand clasps Eve’s rigid, outstretched hand.  With her other hand, Eve holds sheaves of wheat with a fist that also conveys fear and tension. In addition, notice Eve’s slightly angled left foot and raised big toe.  Far away in time and space from Hollywood caricatures, that’s a poignant gesture of shyness and hesitancy.[3] 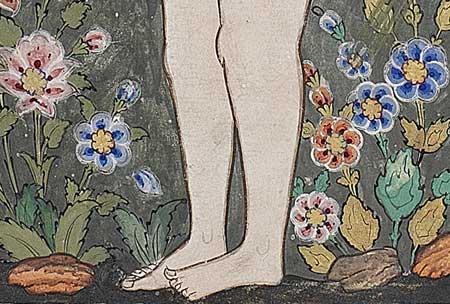 Three out of the four Falnamas represented in the exhibition include an image entitled “People of the Cave”.  A Falnama known as the dispersed Falnama, probably created for the Persian Shah Tahmasb about 1560, includes a “People of the Cave” image.  The composition is balanced and circular.  At the visual center, a white dog is curled up sleeping against the black cave background.  In a crescent above the dog, the companions (people) sleep peacefully with intertwined bodies and arms.  The colorful cave, anchored with three equally spaced green trees, circles around them.  Dispersed around the cave are active men with different types of dress, arms, and standards, and different complexions and facial characteristics, especially noses.  The cave appears as a place of tranquility separated from the world’s turmoil.

Textual sources other than the Falnama provide insight into the image.  In sura 18, Al-Kahf, the Qur’an provides guidance about the associated story.  It indicates (18:9) that the story was already well know among the Qur’an’s first audience.  Syriac Christians of that time referred to the story as the Youths of Ephesus.  The earliest surviving reference occurs  in one of Jacob of Serugh‘s homilies from early in the sixth century.  In the story, youths from Ephesus hide in a cave to escape  Roman Emperor Decius’ order to do homage to his gods Zeus, Apollo, and Artemis.  Decius condemns the youths by sealing the opening of the cave. Many years later in the reign of the (Christian) Eastern Roman Emperor Theodorus II, God awakens the youths from their death-sleep.  One youth returns to Ephesus to get food.  The youth is astonished that Christianity reigns in Ephesus, while the Ephesians cannot understand why the youth attempts to pay for the food with ancient coinage.  The youths and the Ephesians eventually realize that the youths have been resurrected from a long death-sleep in the cave.[4] 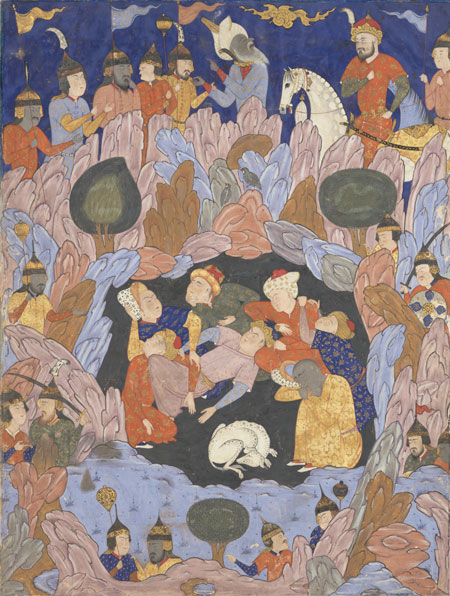 The stories associated with Falnama images did not consistently control interpretations of the images.  Falnama images are distinct, specific and highly articulated, e.g. “Imam Riza Saves the Sea People,” “Imam Ali Slays Murra ibn Qays,” “Khaybar: The Conquering Palm of Ali,” “Alexander Builds a Wall against Gog and Magog,” and “Moses Challenges Pharaoh’s Sorcerers.”  The images can easily be identified with well-known stories.  Most of the stories, however, do not have obvious implications for auguries. In two cases in the four monumental Falnamas’ surviving images, the same visual topos is associated with an auspicious augury in one Falnama, and an inauspicious augury in another.[5]

Apart from Qur’anic or image-specific verses at the beginning of the texts, the augury texts themselves are largely as abstract and insipid as modern horoscopes.  A representative excerpt:

you have found freedom from sorrows, and the doors of joy and happiness have been opened to you, and your affairs, as you would wish, will turn out well, and day by day your fortunes are on the rise.  The intent is good with respect to everything, especially travel, buying and selling, contracting marriage, entering a city, and transporting and consigning things.  In short, the auspiciousness of this intent and the goodness of the augury cannot be denied, and every desire that you have in your heart will turn out beautifully. [6]

Recognizing the augury texts to be bureaucratic work suggests that the monumental Falnamas were for elite use, but not for elite reading.  These Falnamas obviously are lavish, expensive works.  Auguries designed for a specific, elite reader probably would have a literary form like that of Daniel’s interpretation of Nebuchadnezzar’s dream.  In contrast, the auguries in the Falnamas all begin with the generic address, “O augury user!” or “O augury seeker.”  Moreover, the auguries address concerns common to persons of all levels of wealth and status, e.g. “buying or selling anything, or renting or renting out land, a garden, or a house, or forming a partnership, or moving into a new house, or making a request from important people or others.” [8]  The Falnamas seem to me to make most sense as a tool for an elite’s bureaucracy to provide auguries for ordinary persons who seek them from the elite person.[9]

The pretense that the elite person himself will seek auguries from the Falnama would help to enhance the Falnama’s value.  The introduction to the Falnama of Ahmed I declares the book to be “the Book of Auguries of His Majesty the Padishah, Refuge of the World, and Shadow of God.”[10]  Ordinary persons might reasonably and urgently seek auguries from a person understood to be “Refuge of the World, and Shadow of God.”  On the other hand, the introduction explicitly anticipates that Ahmed will seek auguries for himself from the Falnama.  That anticipation should be interpreted in the context of the introduction’s extravagant rhetoric.[11]  It can be interpreted as supporting the Falnama’s value, where its value was primarily to serve persons seeking auguries from Ahmed.  An augury based on the Falnama that Ahmed is described to use is an augury associated with Ahmed’s authority.

Understanding the Falnamas as elite tools for providing auguries to ordinary persons suggests that images were more important than words for making an impressive, royal augury.  I foresee the future for horoscopes on the Internet to be visual.  For a glimpse of this future’s shape, see the Sackler Gallery’s magnificent and unique exhibition, Falnama: Book of Omens.

[1] The exhibition catalog, Farhad and Bağcı (2009), unfortunately lacks the notes to the text translations in Appendix A. I hope that these notes will be posted on the exhibition website.

[2] Id. pp. 53, 58, 100-1.  “The Adam and Eve Expelled from Paradise” image in this Falnama is attributed to the Ottoman painter Hasan Pasha.  On the development of images of Adam and Eve expelled from paradise, see Section III.A. Sense of Scripture, in my work, Sense in Communication.

You look down, girl who desires and is desired,
when the one you love often passes by,
and you try to conceal your breast and face
and you are constantly fiddling with ends of your girdle,
and with your delicate toes
you make marks in the dust on the ground.
Is this respect for modesty? But this is inappropriate:
the Kyprian one {Aphrodite} does not recognize modesty nor Eros shyness.
But if you want to respect modesty so much,
at least bestow on me your nod.

Drosilla and Charikles 3.163-72, trans Jeffreys (2012) pp. 378-9. This girl’s focus on her toes parallels the visual representation of Eve in the Falnama painting.

[4] For an analysis of the story and its sources, see Griffith (2007).  The story is celebrated on the Orthodox Christian calendar under the title, The Seven Sleepers of Ephesus.  Al-Thaʻlabī, a great Islamic scholar who wrote early in the eleventh century GC, provides many details associated with the story.  Farhad and Bağcı (2009) p. 160 describes the youths as living “some time before the birth of Christ.”  Milstein (1998) p. 152, summarizing sixteenth-century “Stories of Prophets” (Qiṣaṣ al-anbiyā ̓) manuscripts, states, “All the authors agree that the personages may have lived before the time of ‘Isa (Jesus)”. The “may” makes this statement difficult to interpret.  Al-Thaʻlabī states, “Exegetes and historians have said that the affair of the People of the Cave took place during the days of the petty kings between Jesus and Muhammad.”  Trans. in Brinner (2002) p. 691.

[7] The good/bad ratio is calculated from the augury classifications in id., Appendix B.  The quoted exhortation is from “Uvays-i Qaran and the Camal”, dispered Falnama, id.  Id. p. 54 notes that the texts of the Topkapı Persian Falnama persistently invoke Imam Ali and underscore the superiority of Shi’ism.

[8] Id. p. 32, makes this point, but emphasizes the universal appeal of the texts, including to elite readers: “each augury includes several prognostications, at least one of which could apply to the most august seeker.”  The quote is from the dispersed Falnama, “Salomon and Bilqis Enthroned,” trans. by Thackston, id. p. 257.

[11] For example, Kalender, the powerful court administrator who wrote the introduction, describes himself as “this humble writer, the least and most insignificant of his [Ahmed’s] servants and smallest of the slaves in his retinue.”  Trans. Tourkin, id. p. 296.  The description of Ahmed’s status is also a matter of extravagant rhetoric.  But the exalted status of the Sultan Ahmed I relative to that of ordinary persons cannot be doubted.

Griffith, Sydney. 2007. “Christian Lore and the Arabic Qur’an: The ‘Companions of the Cave’ in Surat al-Kahf and in Syriac Christian Tradition,” in Gabriel Said Reynolds, ed., The Qur’an in its Historical Context.  New York: Routledge, pp. 109-40.