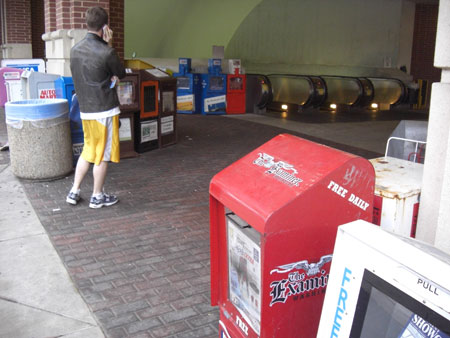 At least six of those boxes have been abandoned.  One of the abandoned boxes is for Bit 0′ Lit.  As a little respected but highly insightful communications industry economist predicted, that publication lasted only a short time and was defunct by autumn, 2008.  Requiring new boxes to post a bond to ensure their removal would raise business costs of entry, but foster cleaner exit.  That trade-off seems to me well worth considering.

The most interesting new distribution-box publication is Energy of the City. The distribution box currently contains a 108-page glossy magazine labeled “premiere issue” and dated Summer 2009. This beautifully produced, high-quality magazine is subtitled “Natural Gas Eco-Friendly Design and Lifestyle Magazine.”  Washington Gas, the DC-area natural gas distributor, owns the publication.  It includes some advertising and some articles that were probably sponsored.  It almost surely isn’t a self-sustaining publication.  Energy of the City’s website duplicates the magazine, including the sound of pages turning.  That approach indicates an traditional media mentality.  It shows little appreciation for new-media opportunities.