Technological change in book production occurred much faster than stylistic change.  Gutenberg began printing Bibles with his movable-type printing press about 1455.  Many others quickly got into the printing business.  Across the second half of the fifteenth century, the books that they printed looked a lot like manuscripts of that time.  Print fonts imitated hand-written scripts.  Printed books had neither a title page nor a specifically formulated title.  A printed book, like a manuscript, was identified by its incipit, the first words of the text.  Information about the printer, like that about the scribe, was included in a colophon, meta-text appended to the main text. 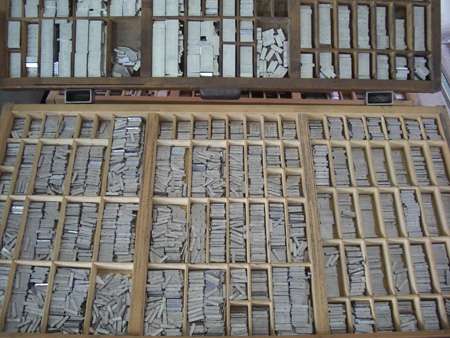 The U.S. National Gallery of Art’s exhibit, Announcing the Text, shows the development of title pages from 1470 to 1900.  By early in the sixteenth century, at least some books included a separate, printed title page.  Over time the title page became elaborated with different size and color fonts, specially written text, and information about the printer.  These changes served the purpose of identifying the text among the rapidly growing supply of texts, building up the printer’s brand name, and selling the text to persons browsing the book. Such changes in business models and markets take more time to develop than does innovation in production technology.

The economic functions of the title page are not closely related to printing technology.  Consider, for example, the vibrant book market of the Roman Empire.  Most Roman texts have been transmitted to the present through medieval manuscripts.  The original presentation style of Roman texts, however, may have looked a lot less like medieval manuscripts and a lot more like eighteenth-century printed books.