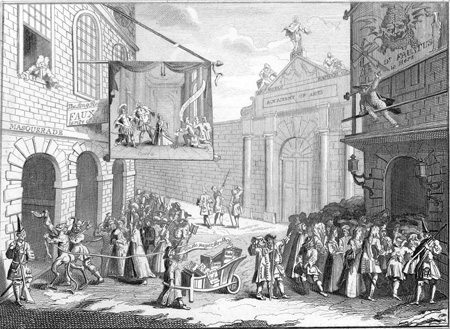 O how refin’d how elegant we’re grown!
What noble Entertainments Charm the Town!
Whether to hear the Dragon’s roar we go,
Or gaze surpriz’d on Fawks’s matchless Show,
Or to the Opera’s, or to the Masques,
To eat up Ortelans, and empty Flasques
And rifle Pies from Shakespear’s clinging Page,
Good gods! how great’s the gusto of the Age.

This is from London in 1724: William Hogarth’s engraving, Masquerades and Operas (larger version here; with engraved text, but smaller, here).  At the center, a woman pushes a wheelbarrow containing books labeled, with variant spellings, Congreve, Dryden, Otway, Shakespeare, Foe, Ben Jonson, and possibly Addison.  With a text ribbon she cries, “Waste paper for Shops.” On the left, a fool and a satyr holding up a purse labeled 1000£ lead a crowd into a Masquerade house and a performance by Faux’s (Fawkes).  On the showcloth labeled opera, the Earl of Peterborough, along with two other English nobles, kneels to three Italian opera performers (Berenstadt, Cuzzoni, and Senesino), pours out a bag of gold, and says, “Pray Accept 8000£.”  On the right, a large crowd is going into a pantomime performance of Dr. Faustus.  In the background, the Earl of Burlington gestures toward the roof of the closed Academy of Arts.

Fawkes was a street fair entertainer like those at eighteenth-century Parisian trade fairs. A London newspaper advertisement in 1726 describe what Fawkes offered spectators:

first, his surprizing Dexterity of Hand, in which he far exceeds all that ever pretended to the same Art, with his Cards, Eggs, Mice, Money, and several Curious Birds from divers Parts of the World that never were seen here before. 2d. His famous Posture Master, who is allowed to be the best in Europe of that kind. 3d. His Musical Clock that plays Variety of Tunes on the Organ, Flute and Flagelet, with Birds whistling and singing as natural as Life. 4th. His Puppet Show, with the Comical Humours of Punch and his Wife Joan : Likewise a Court of the richest and largest Figures ever shown in England, being as big as Men and Women.

This is popular culture in a commercially thriving city.  Today, it’s moved to the Internet.

Note:  Print description details and advertisement text from Catalogue of Prints and Drawings in the British Museum, v. 2 (1873), and John Trusler, The Works of William Hogarth (1833).