Klein defined engaging, segmented transactions. Klein offered potential buyers prices from 20 grams to 1280 grams of gold in exchange for an elegant, personal, physical receipt for a zone of immaterial pictorial sensibility.[1] The receipts for each immaterial price product were differently denoted, but had the same form. They were printed on heavy paper and shaped and typescripted like a bank draft. The background of the receipt featured in large letters IKB. These letters stand for International Klein Blue, Klein’s signature monochrome. Klein also personally signed and dated receipts for immaterial zones that he sold.

Klein retained some vertical control in the market for immaterial pictorial sensibility, but at the same time provided a platform for participation. Those who exchanged gold for Klein’s immaterial content had to agree not to resell the receipt / immaterial content for more than twice the value of the initial purchase. This condition was written directly on the receipt. In addition, Klein declared that for a purchaser to acquire the fundamental and authentic immaterial value, the purchaser must “solemnly burn his receipt.” Klein, in turn, would ritually dispose of half the gold he had acquired from the sale:

In case the buyer wishes this act of integration of the work of art with himself to take place, Yves Klein must, in the presence of an Art Museum Director, or an Art Gallery Expert, or an Art Critic, plus two witnesses, throw half of the gold received in the ocean, into a river, or in some place in nature where this gold cannot be retrieved by anyone.[2]

Klein omitted specifying the buyer’s attendance at the event. Such buyer participation, however, was an important part of actual practice.[3]

Klein’s immaterial content business had strong fundamentals. It was gold-flow positive at its very start.[4]  Disposing of half the gold apparently lessened Klein’s net income.  But under more creative accounting, this gold expenditure could be recorded as an investment in good will or in business development. Alternately, one could recognize that most gold, like most immaterial content, is a natural part of the world’s commonwealth. Klein’s 50% retained share of the gold he received gave him a more favorable revenue split than Google gets through its 32% share of AdSense revenue. 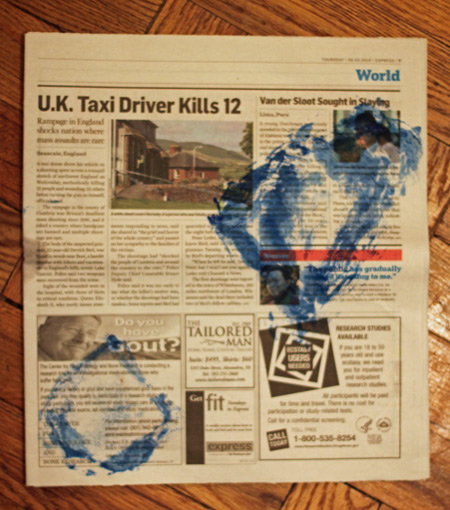 With the Void: Full Powers, a major retrospective of Yves Klein’s work, is at the Hirshhorn Gallery through September 12, 2010. Leaders of newspapers and broadcasting companies could do far worse than requiring all their employees to spend a day enjoying this exhibition.

[3] Photos of the three immaterial integration rituals that took place in early 1962 show the buyer present.  Small reproductions of these photos are on a placard in With the Void: Full Powers.

[4]  With no formal business organization, Klein sold 8 zones of immaterial pictorial sensibility from September, 1959 to February, 1962.  All these transactions but one were for 20 grams of gold.  The other transaction, with Hollywood writer Michael Blankfort, was for 160 grams of gold. See Stich (1994) p. 268, n. 93, which details each transaction.  Blankfort was delighted with his acquisition of a zone of immaterial pictorial sensibility.  He declared that he had:

no other experience in art equal to the depth of feeling [of the ritual integration of the immaterial zone].  It evoked in me a shock of self-recognition and an explosion of awareness of time and space.

Quoted in id. p. 156.  Id. describes the depth of feeling as “[the sale ceremony]”, but this is likely a mistake.  A photo reproduced in With the Void: Full Powers shows Blankfort and his wife participating in the ritual integration. With the Void: Full Powers also reproduces an unattributed comment from the exhibition catalog for When Attitude Becomes Form (Berne, 1969): “artist and owner each had nothing but the art experience.”  That’s incorrect.  The artist had half the gold.

Stiles, Kristine, and Peter Howard Selz. 1996. Theories and documents of contemporary art: a sourcebook of artists’ writings. California studies in the history of art, 35. Berkeley: University of California Press.