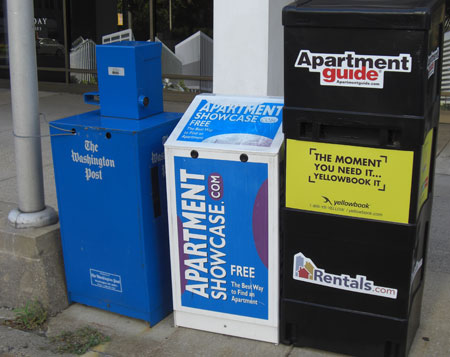 Yellowbook, a Yellow Pages telephone directory, is now being offered in Arlington, Virginia, through on-street print distribution boxes.   The boxes offer the 2010 yellowbook that was distributed to area apartments about nine months ago.  At least in one apartment complex, most of those books were not picked up.  The books in the boxes weigh 3.1 pounds each.  The prospects for them being picked up on the street and carried home seems worse. But perhaps when the books are placed on the street they are counted as “distributed.”

Yellowbook join a wide array of publications offered through on-street print distribution boxes.  Most of the publications, such as the Apartment Guide and Rentals publications with which yellowbook shares a box, are not large or noteworthy businesses.  Among them, the Washington Post grasps for respect by securing its box to a pole with a thin metal wire.  The other boxes are unsecured.