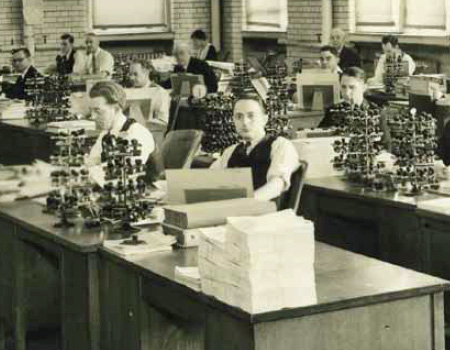 A well-developed bureaucracy considering a report requesting approval to document a proposal to form a new department does not merely stamp “approved” or “rejected” on the report.  It might be stamped “further edit” or “insufficient documentation.”  It might be stamped “in process,” “circulating,” “filed,” or “refile.” It could be stamped “reconsider,” “reconsider again,” “2nd reconsideration,” or, alternatively, “reconsider again and again.”  Documents must be triaged into “preliminary,” “draft,” “redraft,” “daft,” and “trash.”  The number of strokes and stroke force also matters for the impression. The sight of a bureaucratic in a yellowing dress shirt, perspiring, tie askance, vigorously and repeatedly rubber-stamping a report would make clear to anyone the effort that goes into the work.

The European Union is a bureaucratic leader.  That strength is particularly important in the current economic crisis:

Gunther Oettinger, the top German representative in the European Union, proposed that a bureaucratic invasion force be sent from Brussels to Greece to seize the struggling country’s assets “without regard to resistance.”

If Brussels had not engaged in a massive bureaucratic buildup, it would lack the strength to take over Greece.

Countries struggling with government debt need not just good taxes, but great taxes.  As Mark Cuban has insightfully declared, “Bureaucracy and Paperwork is the Greatest Tax on Small Business.”  Small business is a key engine of job creation.  Taxes on small business have to make the leap from good to great.  Payroll taxes, property taxes, income taxes, sales taxes, and other taxes for small business should be immediately reviewed with the objective of considering how to implement a revision of regulations restructuring and deepening the contribution of bureaucracy and paperwork to the taxation of businesses categorized as small under the operative regulations for business-size classification.