Persons with power can make persons prisoners.  Prisoners are confined against their will.  They are confined behind locked doors and sometimes bound with shackles or chains.

proclaim liberty to the captives and release to the prisoners

Prisoners can also be set free by violent action:

he brought them {prisoners} out of darkness and gloom,
and broke their bonds asunder.
Let them thank the Lord for his steadfast love,
for his wonderful works to humankind.
For he shatters the doors of bronze,
and cuts in two the bars of iron.

Prisoners, narrowly understood, can be set free by no ways other than authoritative words or violence.

In the ancient world, being a prisoner was not narrowly understood.  Consider this line of ancient biblical song:

The Lord sets the prisoners free;
the Lord opens the eyes of the blind.

In this literary form, the two half-lines are units that have a particular relation such as repetition, contrast, etc.  The relation between prisoners and the blind is not obvious today.  But another line of ancient song helps to elucidate the relation:

I have given you as a covenant to the people,
a light to the nations to open the eyes that are blind,
to bring out the prisoners from the dungeon,
from the prison those who sit in darkness.[1]

In these two lines, their half-lines relate through emphasis and repetition.  Moreover, these two lines together associate freeing prisoners and opening the eyes of the blind with bringing light.  Light in the ancient world had very broad associations with life and an important god.

A general form of cursing in the ancient world was a “binding spell.”  Such a spell physically constrained a person, but did not kill.  Binding was thus imprisonment generalized.

Ritual services in Roman Egypt included a generally applicable release from bonds.  For example, one such service involved saying:

Let every bond be loosed, every force fail, let all iron be broken, every rope or every strap, let every knot, every chain be opened, and let no one compel me, for I am — {say the name}.[2]

“Say the name” assimilates the user to the god invoked, thus blurring the authority of binding and releasing.  Similarly, the statement is a passive construction (“let…be”) that blurs violence (“all iron be broken”) with an ordered release (“every chain be opened”). These verbal techniques helped to make the release from bonds generally applicable.

the Lord descends into the souls of those who seek him.  He goes into the depths of the hellish heart and there he commands death, saying: “Release those captive souls that seek after me, those that you hold by force in bondage.”  He breaks through the heavy stones that cover the soul.  He opens the tombs.  He truly raises to life the dead person and leads that captive soul forth out of the dark prison.

This account presents setting prisoners free within a universal narrative of human life, conflicting desires, death, and redemption.  The phrase “leads that captive soul forth” alludes to the Exodus account of God leading the Hebrews to freedom from Egypt.  Immediately following this description is a highly particular example:

Take the example of a man bound with chains, hand and foot, and someone comes to remove his shackles and set him free so he may walk unencumbered.

Did the “someone” who removed the shackles have the key and do the initial shackling, or did that person forcibly break the shackles as an opposing authority?  The answer doesn’t seem to matter.  This specific example immediately expands to universality:

In a similar way the Lord removes the chains of death strangling the soul and releases it and sets the mind free so that it may amble without disturbance, but in tranquility before God.[3]

I am Mary.  Let the {stone} break, let the darkness break before me.  {Let} the earth break.  Let the iron dissolve.  Let the demons retreat before me. … They fear {his holy name, which } is Yao Sabaoth Adonai Elo {Eloi}, who, by his power, releases every one who is a prisoner.  You must destroy every spirit and power of the devil.[4]

Sin, demons, and the devil could imprison anyone.  Setting a prisoner free was a figure of common understanding and popular concern in the ancient world. 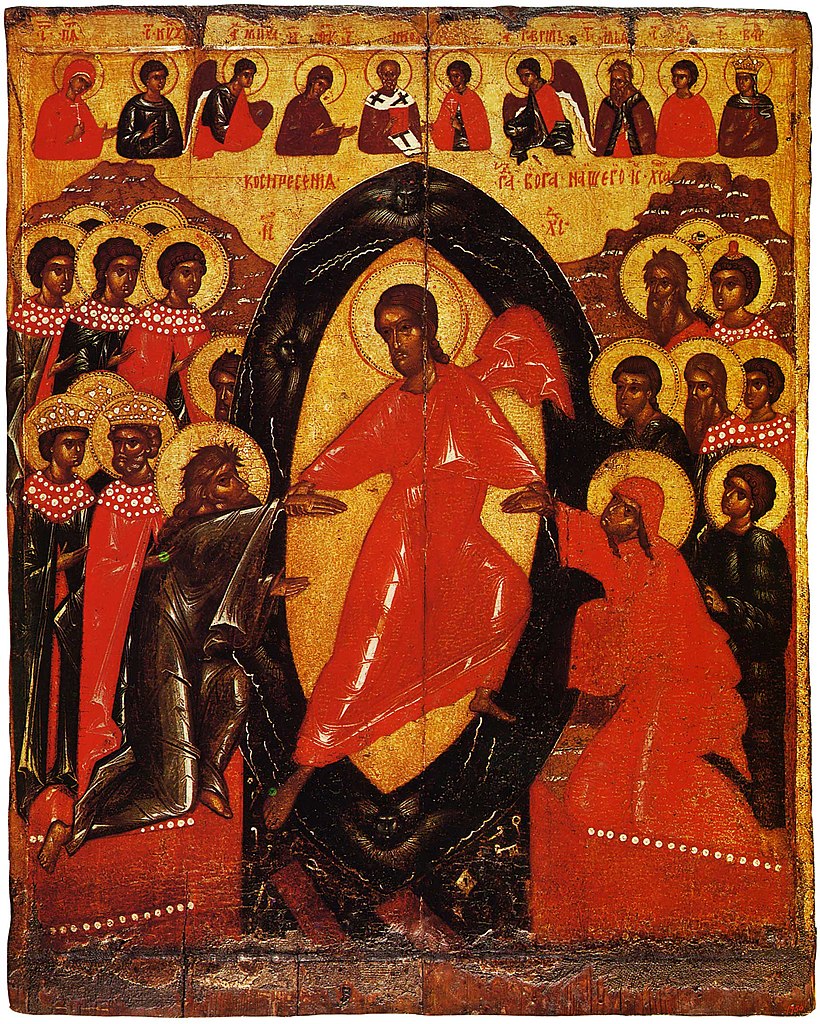 [3] Previous three quotes from Pseudo-Macarius, Homily 11, trans. Maloney, George A. 1992. The fifty spiritual homilies and the Great letter. New York: Paulist Press. The homily describes what came to be called the harrowing of Hell.

[image] Icon of Christ’s descent into Hell to release its prisoners. Made in Pskov, Russia, in the last quarter of the fourteenth century. Was in the Trinity Cathedral in Ostrov, Pskov Oblast, Russia. Now preserved as inventory # DRZH-2120 {ДРЖ-2120} in the Russian State Museum {Государственный Русский Mузей}, St. Petersburg, Russia. Image thanks to Icon Art and Wikimedia Commons.