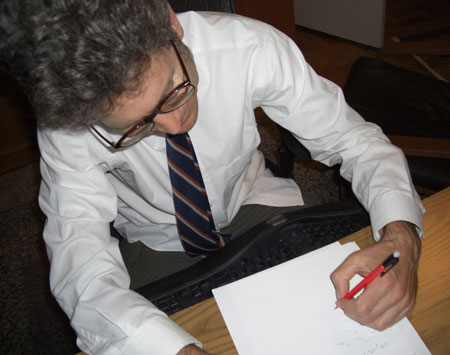 [Take a cat], and [make] it into an Esies {sacred dead} [by submerging] its body in water.  While you are drowning it, speak [the formula] to [its] back,

The formula during the drowning [is as follows]: “Come hither to me, you who are in control of the form of Helios, you the cat-faced god, and behold your form being mistreated by [your] opponents, [them] {insert name of spell’s target}, so that you may revenge yourself upon them, and accomplish [the] {insert desired action} deed, because I am calling upon you, O sacred spirit.

The text continues with voce mysticae (voce magicae) and another invocation to the cat-faced god.  This section then concludes with the parenthetical instruction “add the usual.”  The ritual text as a whole includes additional, similar text and a few references to charioteers and racehorses.  The text ends rubricated thus:

This is the ritual of the cat, [suitable] for every ritual purpose: A charm to to restrain charioteers in a race, a charm for sending dreams, a binding love charm, and a charm to cause separation and enmity.

Overall, this ritual text is like boilerplate a modern lawyer might use in filing for divorce, bankruptcy, and tort damages.  The purposes of the ancient Egyptian ritual text, however, are much less closely related to allocating economic assets.

Financial services are rare among the surviving Demotic, Greek, and Coptic ritual texts from Roman Egypt.  Among the roughly 530 spells in a collection called the Greek Magical Papyri, only three directly concern financial interests.  Among ritual texts in Coptic, six out of roughly 260 spells serve financial interests.  The financial-service ritual texts don’t concern financial needs for the financially desperate (for a good harvest, a high price for goods, forgiveness of debt, need for a loan, etc.).  The texts seem oriented toward serving persons who already have considerable economic assets.

In the Greek Magical Papyri, all three financial-service ritual texts concern the success of a business in a specific location.  Two of the texts request, respectively, “give income and business to this place” and “give favor, business to me and this place…in the house I do my business…send to this place every business and good daily profit.” The third financial-service text exploits the traditional charitable cases of the widow and orphan in its own pleading for luxuries: “I receive you for the widow and the orphan. Therefore, give me favor, work for my business. Bring to me silver, gold, clothing, much wealth for the good of it.”

The six Coptic financial-service ritual texts provide more detail about specific financial interests.  A pair of oracle texts concerns the acquisition of a bank.  Another concerns the acquisition of a shop.  In addition to these interests in acquiring ownership of businesses, another concerns insurance for major business assets: “For the safety of ships at sea or on the ocean with everything (on board).”  Others concern smaller financial interests: finding a job (“a shop you wish to work”), transactional profits (“For a merchant to profit”), and increased demand (“gather together the people of this village into the shop of N.”).

The rarity of financial services in the ritual texts is underscored by the context of their references to business and prosperity.  References to business in the Greek Magical Papyri predominately concern the ritual business itself.  For example, an erotically tinged spell to induce insomnia in a woman calls upon a god to “hear me, in this business which I am performing.”  Another spell “to make a woman love a man” has the ritual-service provider speak into a cup of wine to a godly agent, “I shall send you.  Will you go on my business?  Will you do it?”  Prosperity is just one concern among many in a prayer for “health no magic can harm, well-being, prosperity, glory, victory, power, sex appeal.  Restrain the evil eyes of each and all of my legal opponents.”  Even “profit” is multifaceted and embedded amidst other interests in a prayer to make an image powerful:

Ritual services in Roman Egypt were a business that served mostly non-financial interests.

Persons with large land-holdings or lucrative political-administrative offices most likely were the customers for ritual services.  Although Roman Egypt was a major source of grain for the Roman Empire, real wages for unskilled workers were barely sufficient for survival, and wage workers apparently also worked small plots of land to provide food for themselves.  The size of the rent-collecting class isn’t clear from available economic sources.  The ritual texts are evidence that the size of that class was sufficient to support a ritual-service economy, and that persons in that class were economically secure.

The Greek Magical Papyri (PGM) analyzed and quoted above are from Betz (1992).  The spells in this collection were not selected by topic.  Most of the PGM spells apparently originated from a single, ritual-service provider in Thebes during the second or third century.  The Coptic ritual texts analyzed and quoted above are from Meyer and Smith (1994).  This collection has been selected to be representative; it probably covers a large share of known Coptic ritual texts.  The Coptic ritual texts are typically from a few centuries later than the PGM.

Here are specific references for the PGM and Coptic financial spells, with the PGM spell list (Excel version).