In the second century, the physician Galen vigorously proclaimed true medical knowledge.  He studied mathematics, logic, philosophy, anatomy, and pharmacy.  He engaged in dissections and vivisections, treated patients with substances and surgery, and wrote many technical books.  An early Greek school of medicine, called the Dogmatists, downplayed the importance of factual observation and experience.  Galen harshly criticized the Dogmatists. Early Greek philosophers had pondered the causes of existence and change.  Galen described material nature appropriate to purpose as circumscribing possibilities for existence and change.

Galen had contempt for practitioners merely of verbal arts.  Galen called such persons sophists.  They had little interest in facts and truth.  They sought public acclaim and personal wealth through appealing rhetoric:

The ubiquitous, fashionable, shameless sophists, according to Galen, try to contradict experience, they deny that which is evident, they dishonour phenomena and disregard clear observations, they reject anatomical facts, they give little heed to the probable, they even ignore evidence that has led to a universal consensus, and they transgress against the two things that constitute the whole medical art, viz. experience and reason.[1]

A Jewish scholar living in Alexandria two centuries before Galen described Moses as declaring, “What is impossible to every created being is possible and easy to {God} above.”[2]  Galen, who believed in a prime-mover God, forcefully rejected Moses’s knowledge of God:

it would not have been possible for {God} to make a man out of a stone in an instant, by simply wishing so. It is precisely this point in which our own opinion and that of Plato and of the other Greeks who follow the right method in natural science differs from the position taken up by Moses. For the latter it seems enough to say that God simply willed the arrangement of matter and it was presently arranged in due order; for he believes everything to be possible with God, even should He wish to make a bull or a horse out of ashes. We however do not hold this; we say that certain things are impossible by nature and that God does not even attempt such things at all [3]

physicians of the kind mentioned are comparable to Moses, who gave laws to the Jewish people, for he wrote his books without adducing proofs, he merely said: God has ordered, or, God has said. [4]

An important idea in early Greek thought was that nothing comes from nothing.  The contrary position, creatio ex nihilo, was by Galen’s time associated with Jewish belief.  From Galen’s perspective, Moses’s description of God’s creatio ex nihilo was analogous to sophists’ creation of material wealth and public acclaim from nothing but words.

Celebrating verbal arts implied a much different valuation of Moses’s position.  About Galen’s time, a book instructing readers on how to be verbally noble, great, and impressive (attributed to Longinus) observed:

the lawgiver of the Jews {Moses}, a man who did not just happen, since he made room for the power of the divine and made it appear in accordance with its worthiness, says in the introduction to his Rules, “God said” — what? — “Let there be light, and there was; let there be earth, and there was.” [5]

This observation occurs in the midst of discussing Homer’s sublime expressions.  Homer’s writings in the ancient Greek world were, among the learned elite, much like the Bible was among the Jews.  The quotation from Moses’s “introduction to his Rules” measures up to the sublimity of the quotations from Homer. That makes Moses very good, indeed.  Longinus’s reference to Moses as “a man who did not just happen” differentiates Moses from Galen’s image of a man made in an instant from a stone.[6]  The subsequent clause in Longinus’s observation “since he made room for the power of the divine and made it appear in accordance with its worthiness” is best read as explaining Moses’ verbal technique in the quoted words.  Moses, according to Longinus, represented God with sublime verbal technique.

Under Galen and Longinus’s contrasting evaluations of Genesis is their common interest in created beauty.  In the ancient world, differences between physicians, sorcerers, philosophers, sophists, mythic figures and historical persons were blurry. Elite intellectuals, from a prominent Roman statesmen c. 75 GC to a prominent Islamic scholar in twelfth-century Damascus, associated Moses with magic.[7]  Galen complained of similar cross identification:

when a good man makes a sound prediction on the basis of methodical understanding, proper training, long experience, precise observation and rational deduction, far from receiving the acclaim he deserves he is suspected of sorcery (which is a good deal worse than the mere slur that scientific prognosis is nothing but fortune-telling) [8]

While attempting to reveal through anatomical facts a beautiful rational order, Galen competed aggressively with sophists in sophistic ways:

Galen’s audiences, moving back and forth between sophistic and Galenic epideixis, probably brought similar rhetorical, theatrical, and affective expectations to both kinds of performances. If Galen’s accounts are to be trusted, he did not disappoint their expectations: they found in him a superbly staged, historically aware, highly cultured, rhetorically informed, self-promoting, expert performer whose technical virtuosity amazed, delighted, and instructed a largely admiring public. In his keen rivalry with the sophists, and with those who, in his view, resembled them, Galen tried to secure victory by becoming a skilful performer in the very traditions represented by the ‘Second Sophistic’. [9]

Jews’ biblical study and their taking of Moses’ rules into their daily lives did not emphasize sophists’ rhetorical concerns.  Yet an ancient rhetorician could hardly fail to recognize the stunning power of the Bible in Jews’ lives and their love for their God.  Moreover, the Jews’ Hebrew Bible gained wide distribution in Greek from before the end of the second century BGC.  That the surviving literature of non-Jewish rhetoricians doesn’t show much appreciation for the Hebrew Bible may reflect primarily the history of political and cultural hostility toward the Jews.

Galen’s demonstrations of biological purpose and his references to the demiurge make most sense in relation to intellectual beauty.  To scholars today, Galen’s ultimate explanations look like merely teleological claims that function like Moses’s words creating laws.  Galen was not interested in arguing about creatio ex nihilo or eternal existence of the world.[10]  He sought to direct intellectual attention to the material surface — how biological parts fit together and work together to serve a particular purpose. He saw within the material surface of the world an order supporting good reasoning and in turn revealing splendid truth. Why did Galen refer to a demiurge at all?[11]  The right answer seems to me to be: as a subject for praise for the beauty that Galen’s system of reasoning revealed, at least to him.

I loved her and sought her from my youth,
and I desired to take her for my bride,
and I became enamored of her beauty.

You know modern, rigorous science through signs of bodies bored to death.  Understanding creation can be more lively.  Galen’s work, like Ovid’s Metamorphoses and Dante’s Comedy, combined words and deeds to reveal and transform worlds.[12]  The way is poetry engaged with matter. 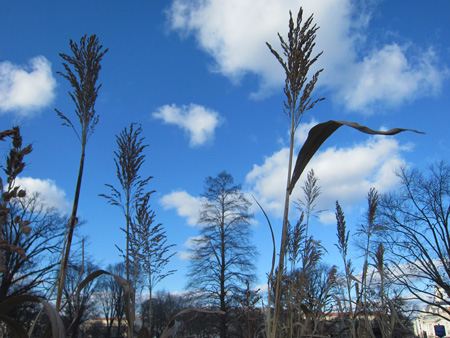 [4] From Galen, On Hippocrates’ Anatomy.  This work is lost, but the quoted text (reference 2 in Galen on Jews and Christians) has been preserved in HP p. 151.

[5] Longinus, On the Sublime, 9.9, trans. Arieti and Crossett (1985) pp. 57-8.  The Pentateuch was known as the Books of Moses, and ancient scholars considered Moses to have written Genesis.  See, e.g. Philo, On the Life of Moses, II, VIII.47.  Longinus’s quotation from Genesis is not from the Septuagint text (Arieti and Crossett (1985) p. 57, note).  Other Greek translations of Hebrew scripture are documented in the second century GC .  Others probably existed even earlier.

[6] The apparent intertextuality between Longinus and Galen favors dating On the Sublime after Galen, rather than before.  Some have questioned whether Longinus’s observation on Moses is a later interpolation.  The analysis above supports that observation’s integrity in On the Sublime.

[7] Pliny the Elder, in Natural History, 30.2, states: “There is another sect, also, of adepts in the magic art, who derive their origin from Moses, Jannes, and Lotapea, Jews by birth, but many thousand years posterior to Zoroaster.”  In twelfth-century Damascus, the scholar `Abd al-Latif al-Baghdādi noted:

Al-Shaqani asserted that Yāsīn could perform miracles which even Moses, the son of Amrām, would have been unable to perform, that he could produce gold coins whenever he wanted and in any quantity and any mintage he desired, and that he could turn the waters of the Nile into a tent, under which he and his colleagues would be able to sit.

[8] Hankinson (2008) p. 7 (describing Galen’s view, not directly quoting Galen).  Galen frequently motivates his works as writing at the request of friends.  König (2009) sees in that motif:

a good example of why we should be more ready to view the relationship between literary and technical writing in the ancient world more as a relationship of continuum and cross-fertilization than of contrast.

[11] Flemming (2009), p. 82, insightfully poses this question.  Her answer seems to tend in the direction of praise for the Emperor.  That seems to me too narrow of an understanding of the impulse to praise within Galen’s demonstrations and writings.

König, Jason. 2009.  ‘Conventions of prefatory self-presentation in Galen’s On the Order of my Own Books‘, Ch. 2 in Gill, C., Wilkins, J. and Whitmarsh, T. (eds) Galen and the World of Knowledge. Cambridge University Press.