The Syrian-Persian family Bakhtishu (Buḫtīšū‘) served rulers in the Islamic world from the eighth century to the eleventh century.  Bakhtishu is a Syro-Persian name formed from the phrase “Jesus has redeemed.”  In the fifth and sixth centuries, persons named Bakhtishu were metropolitan bishops in the East Syrian Ecclesiastical Province of Beth Garmai, Diocese of Karka d’Beth Slokh (present-day Kirkuk, Iraq).[1]  In 765, Abbasid Caliph al-Mansur summoned Jūrjis ibn Jibrāīl ibn Bakhtīshū` from Jundishapur, in southwest Persia, to Baghdad.  Jūrjis, a Christian, was then a well-known physician and medical author heading a hospital (bimaristan) in Jundishapur.[2]  An academy at Jundishapur is thought to have been a refugee for Syrian Christian scholars fleeing Byzantine persecution in the late fifth and sixth centuries.  Whether the Bakhtishu of Jundishapur were related to the Bakhtishu of Karka d’Beth Slokh isn’t clear.  In any case, nearly continuously over the next three centuries, Bakhtishu from Jundishapur served as physicians to Abbasid caliphs and other Islamic rulers.

Stories about the Bakhtishu underscore courtly wit and verbal play.  Contemporary Christian teaching limited sexual relations to sex within marriage between one man and one woman. Jūrjis ibn Jibrāīl ibn Bakhtīshū`, the first Bakhtishu to serve as physician to an Abbasid caliph, adhered to that teaching:

“I understand you have no wife,” said the Caliph. “I have an old and ailing wife,” answered the physician {Jūrjis}, “who cannot come and join me here.” He then left the Caliph’s presence and went to church. The Caliph meanwhile ordered his eunuch Sālim to select three attractive Greek slave girls and take them to Jūrjis with three thousand dirhams. When Jūrjis returned to his lodgings, `Isā ibn Shahlā told him what had happened. He showed the slaves to his master, who disapproved of the matter and said: “O Devil’s disciple, why did you bring these into my apartment? Go and return them to their owner.” He rode with `Isā to the Caliph’s palace and gave the slaves back to the eunuch. When al-Mansūr heard of this, he called Jūrjis and asked: “Why did you return the slaves?” Said Jūrjis: “They cannot stay in the same house with me, for we Christians do not marry more than one woman; as long as she is alive, we must not marry another.” This attitude pleased the Caliph, who immediately ordered that Jūrjis be given access to his favorite and legitimate wives and become their physician. His fame and position rose even higher.[3]

The narrative line connecting Jūrjis saying “I have an old and ailing wife” to his leaving the Caliph’s presence and going to church highlights the story’s point: to describe Jūrjis’ distinctive, Christian marital practice.  Jūrjis’ grandson, Jibra’īl ibn Bakhtīshū` ibn Jūrjīs, who was also a Christian, nonetheless took concubines.  Timothy I, Patriarch of the Church of the East (780-823), considered Jibra’īl’s taking of concubines to be a grave sin:

The Patriarch said calmly {to Jibra’īl}: “I fear the wrath of Christ for you.”  Jibra’īl’s reply, “Oh pederast,” which was unheard by Timothy, shocked the priests who were standing nearby.  When the Patriarch was apprised of Jibra’īl’s words, he went into the church and prayed that God would punish the physician.

Presently, Jibra’īl came out to leave.  As his horse came to the New Bridge {in Baghdad}, the animal threw him to the ground.  Suffering from a broken right hand and foot as a result of the fall, Jibra’īl was brought in a litter back to the monastery by his mother.  Ignoring his pleas to send for a physician, Jibra’īl’s mother prayed and faster for three days.  At the end of the three days, Timothy anointed Jibra’īl with oil.  Thus, the ailing physician made his peace with the Patriarch and his health was restored.[4]

This story, while clearly tendentious and fabulistic, probably drew upon contemporary, relevant eighth-century church records.  Jibra’īl was extremely wealthy and politically powerful.  Bitter conflict between the Patriarch Timothy and Jibra’īl over the latter’s taking of concubines is plausible.[5]  That conflict also plausibly colored the story of  Jibra’īl’s grandfather’s sexual fidelity. 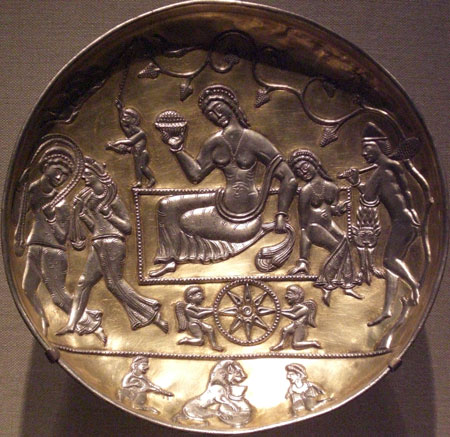 Before accepting treatment from a physician, a caliph had the physician examined.  The examination not only probed the physician’s knowledge, but also his appearance, manner of speech, and verbal wit. In 787, Caliph Hārūn al-Rashīd was suffering from headaches.  Seeking effective relief, he summoned from Jundishapur “Bakhtishu the Great, the son of Jūrjis.”  Entering Caliph al-Rashīd’s presence, Bakhtishu saluted him in Arabic and Persian.  Yahya ibn Khalid, a member of the illustrious Persian Barmikids family, and the Caliph’s leading physicians were unable to engage Bakhtishu at his lofty level.  Declared one of the physicians to the Caliph:

O Emir of Faithful, there is none among us who can converse with this man, for he epitomizes philosophy. He and his father and the entire family are all philosophers.[6]

The solution to this discursive problem was ingenious:

Al-Rashīd then ordered one of his servants to bring Bakhtīshū` the urine of a riding animal, in order to test him. When this had been done, the physician exclaimed: O Emir of the Faithful, this is not human urine.” Said Abū Quraysh: “You are wrong, this is the urine of the Caliph’s favorite wife.” Said Bakhtīshū: “Let me tell you, O honourable Shaikh, that no human being ever produced this; if what you say is true, then perhaps that favorite has become a beast.” The Caliph then asked him: “How did you know it is not human urine?” The physician replied: “It has not the consistency, the color nor the smell of human urine.” The Caliph asked: “Under whom did you study?” — “Under my father, Jūrjis.” The medical men said: “His father’s name was indeed Jūrjis, and there was no one like him in his time. Ja`far al-Mansūr used to honor him greatly.” The Caliph then turned to Bakhtīshū` and said: “What do you advise feeding to whoever passed this urine?” — “Good barley.” The Caliph laughed heartily and ordered Bakhtīshū` to be given a beautiful and precious robe and a large sum of money. Then he said: “Bakhtīshū` is to be my chief physician and to be obeyed by all the others.”[7]

Diagnosing through examining a patient’s urine was a central medical practice in the ancient Islamic world. So too were dietary prescriptions.  In his diagnosis of the animal urine, Bakhtishu not only displayed medical acumen, but also skillful riposte.

Courtly wit is well-mixed with technical knowledge in stories about the Bakhtishu.  According to another story, one of Caliph al-Rashīd’s favorite women had her hands frozen outstretched above her head after sexual excitement.  Physicians failed to unfreeze her arms with ointments and unguents. Jibra’īl, who as noted above had especially wide-ranging sexual experience for a Christian, cured this unusual ailment with bio-psychiatric insight:

The Caliph had the girl brought in. When Jibrā’īl saw her, he ran to her, bent his head and took hold of the edge of her garment, as if he was going to uncover her.  The girl was stupefied and, thanks to her shame and emotion she recalled the use of her limbs and threw her hands down to catch the edge of her robe.

The girl was thus cured.  Jibrā’īl then provided a technical description of the ailment and his cure:

During sexual intercourse this woman had a soft mixture pouring into her members, resulting from all the excitement and the expansion of heat; now, as the excitement caused by the sexual act stops suddenly, the rest of this mixture froze inside all her nerves, and nothing could dissolve it but movement again. I tried to cause her heat to spread, and so the rest of the mixture dissolved.[8]

That technical description represents knowledge no more true than most statistical regressions that appear in current scholarly economics literature.  Knowledge, however, is valued within a particular field of social assets, relations, and practices.  As physicians to Abbasid caliphs, the illustrious Bakhtishu of Jundishapur were eminent in both medical-technical knowledge and elite culture.

[1] Wilson (1974) pp. 23-4.  In thirteenth-century Damascus, the etymology of Bakhtishu was thought to be “servant of Jesus.”  HP p. 240.  That shows the etymology shifting from theological to personal characterization. The name is more properly written as Buḫtīšū’ / Bakhtīshū`and has variant spellings Bukhtishu and Bukht-Yishu.

[2] HP pp.  236-7.  Wilson (1974) p. 24 notes that Ibn Abi Usaibia and al-Qifti are the leading biographers of the Bakhtishu. The only surviving written work of a Bakhtishu is apparently that of Abū Sa`īd `Ubayd Allāh ibn Jibrā’īl `Ubayd Allāh ibn Bakhtīshū` ibn Jibrā’īl ibn Bakhtīshū` ibn Jūrjis ibn Jibrā’īl ibn Bakhtīshū`. Abū Sa`īd died a little after 1058. His surviving works include the Manafi’ al-Hayawan (Advantages Derived from Animals), Ar-rauda at-tibbiyya (The Medical Garden), and a treatise “On love as a disease.” See Meyerhof (1928).  The nature and extent of the academy and hospital at Jundishapur are a matter of some controversy.  See Dols (1987).  For a good review of physicians at Jundishapur, see Taylor (2010).

[3] HP p. 238.  Muslims could licitly have multiple wives.  The Caliph apparently was pleased that he did not have to worry that Jūrjis would engage in covert sex with women in the Caliph’s harem.  Ibn Abi Usaibia attributes the story to Pethion the Dragoman, a translator (probably Syriac Christian) whom he describes as having unpolished knowledge of Arabic.  HP p. 392. Another story similarly attests to Jūrjis’ Christian piety:

The Caliph exclaimed: “O Jūrjis, believe in Allāh and become a Muslim, and then I shall guarantee you Paradise.” Jūrjis answered: “I will die believing in the faith of my forefathers {Christianity}, and I wish to be where they are, be it Paradise or the Inferno.” The Caliph smiled at these words and said: “I have felt truly well from the time you came here to this very day.  I have been rid of all the maladies that used to plague me.”

HP p. 239.  This story is also attributed to Pethion the Dragoman.  Pethion seems to have been particularly interested in the Christian Bakhtishu.

[8] HP p. 244. In a somewhat similar story from ancient Greek literature, Demeter was refusing to drink because of her sadness over the loss of her sister Persephone. The old woman Baubo lifted her skirt and displayed her vagina to Demeter. That action prompted Demeter to smile and then drink. See Clement of Alexandria, Exhortation to the Greeks, Bk 1.

The man was instantly seized with a violent pain in his leg, which spread within his body until it approached the heart. He fainted and his condition grew steadily worse, until he died. The reason was that fanciful thoughts and psychic processes exercise a strong influence upon the body; when the merchant realized the the harm done to him had been caused by a snake bite, his emotions were strongly affected, and the remainder of the poison which lingered in that place started to spread through his body, killing him when it reached the heart.

One thought on “illustrious Bakhtishu (Buḫtīšūʿ) physician family of Jundishapur”