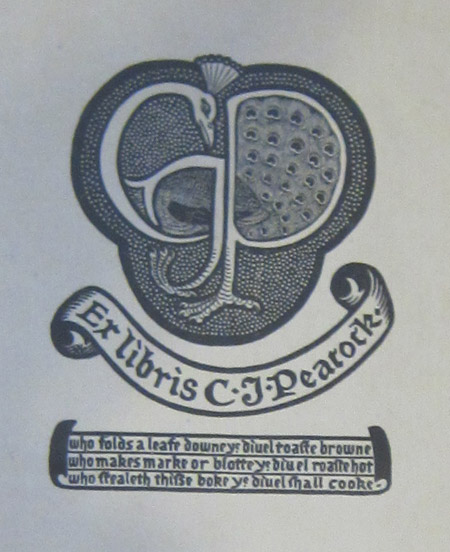 Book curses attempt to protect books from damage and theft.  A book printed in Paris in 1502 has written on its inner upper cover:

While it has terrifying terms, this curse has communicative force only for potential thieves or an actual thief.  Others can’t tell whether the book was stolen.

A book curse that specifies the book owner has broader communicative effect.  An owner-specified book curse communicates the curse to those who find the book in the possession of someone other than the specified owner.  For example, along with specifying its owner, C. J. Peacock’s “peacock” bookplate contains a book curse:

A book written before 1327 similarly contains an owner-identified curse:

This book belongs to St. Mary of Robert’s Bridge; whoever steals it, or sells it, or takes it away from this house in any way, or injures it, let him be anathema-maranatha.

Sensitive to others’ perspective, a different owner of this book added in 1327 this inscription:

I, John, Bishop of Exeter, do not know where the said house is: I did not steal this book, but got it lawfully.[3]

A better lawyer would have included in the subject of the book curse, “{whoever…} or buys it, or acquires it in any way, including but not limited to, transactions lawful under the jurisdiction of {insert jurisdiction favorable to the client}.”  With good enough lawyering and a credible enough public, a book curse could prevent a book’s circulation and reduce its exchange value to zero.

W.S. Merwin’s book curse doesn’t prevent his book from circulating.  Merwin wrote in one of his books:

That curse is on the title page with a book label for a public library.  Hence Merwin’s book curse doesn’t impede the public circulation of his book.

[2] In Charles Kelsall, Classical excursion from Rome to Arpino (Geneva: 1820), copy in the National Gallery of Art (Washington, DC), displayed in the exhibit, In the Library: Marks of Ownership, Jan. 9-Apr. 20, 2012.

[3] This and previous book curse originally in Latin.  For both, see Drogin (1983) pp. 91-2.  Maranatha in “anathema-maranatha” intensifies the curse.