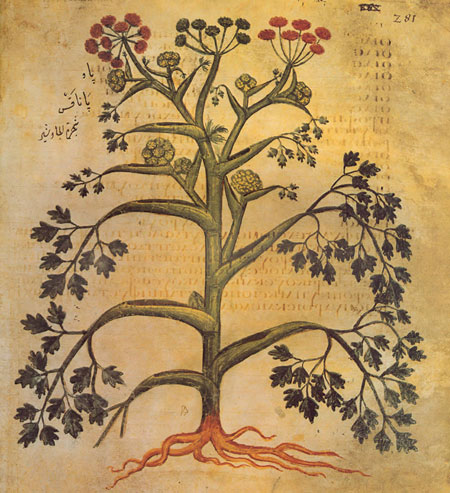 Medical practice created a demand for knowledge of substitutes among materia medica.  A sphere of knowledge competition in ancient medicine stretched from southern Spain to India and from northern Greece to northern Africa.  Across this vast geographic expanse, a medicinal herb found in one location might not be readily available in another location.  More generally, the cost of medicines promoted demand for substitutes.  Some medicines, such as theriac, consisted of many exotic ingredients and were very expensive.  At the same time, physicians sought to provide medicine for the poor. Cheap substitutes for expensive medicines helped physicians to serve the poor.

Some ancient lists of substitutes among materia medica have a simple propositional form.  They consists of lists of pairs of medical substances.  A focal medical substance is paired with its substitute.[1]  The earliest surviving list of substitutes among materia medica has such a form.  It exists as a chapter in the influential, seventh-century Medical Compendium in Seven Books, by Paulus Aegineta.  In Baghdad early in the eighth century, the Jewish physician Māsarjawaih produced in Arabic a formally similar list of substitutes.  Māsarjawaih, thought to have been the first to translate a scientific book into Arabic, apparently was an important scholar.  His list of substitutes thus probably garnered considerable attention in the ancient world.

In Alexandria, he {Galen} says, wishing to obtain the campion (lychnis) for a certain woman who was in danger, and not having got it, if I had not found and used the seed of acanthium, the woman would have been soon lost.  Hence, having been requested by my companions, I made out a list of the medicines which may be substituted for one another, in order, beginning with this same article: [2]

Commentary. This is taken from a work ascribed to Galen, the authenticity of which, however, is very doubtful.  Cornarius has attempted many corrections of the text, and we have found ourselves compelled to make other alterations.

The arrangement of those pairs supports the inference that tamarind is a substitute for crystalline sugar, but an inferior substitute relative to dry black plum.

References to groups of medicines in Māsarjawaih’s list also suggests that the pairs are not equivalences.  Māsarjawaih’s list contains six instances of “all of these {with or without further specification}” and two instances of “both of these”.  All eight of these grouping occur in the focal position.  That’s consistent with the focal position being superior to the substitute position.  A physicians looking for a substitute chooses not among focal medicines, but among substitutes.  Specifying multiple inferior medicines would not instruct a physician’s choice among those inferior medicines.

The grouping “both of these” most plausibly refers to “inspissated juice of artichoke” and “nux vomica.”  However, with the transitivity that the list suggests overall, pair 100 could be more simply specified as “nux vomica => borax and mustard.”  The transitive inference would generate the same substitute relation as the grouping “both of these.”  A more surprising specification is this:

The substitute apparently encompass the focal medicine.  That makes no sense.

Specifying medical substitutes as a list of pairs of materials has weighty medical weaknesses.  Medicine is typically used to treat a specific sickness.  That specific sickness is likely to be relevant to the best substitute medicine.  Specifying substitutes without respect to quantities also seems irrational: the potencies of materia medica surely vary.  Other ancient specifications of substitutes provide details on the medical application and relative quantities.[7]

The systemic shortcomings of ancient medical substitute lists suggest a more general systemic problem.  Ibn Abi Usaibia’s History of Physicians indicates that ancient physicians commonly studied logic and could have applied it to lists of medical substitutes.  Nonetheless, even a highly sophisticated, extraordinarily comprehensive pharmacological treatise from the twelfth century seems not to have considered the logical relation between substitute claims.[8]  Systemic reasoning has less direct personal return than pursuing particular interests.  That’s as true in intellectual reasoning as it is in government budgeting.

Data: substitutes among materia medica according to Paulus Aegineta and Māsarjawaih (Excel version)

[2] Bk 7, Sec. 25, trans. Adams (1844) p. 604.  What the Galenic text means by “in order” isn’t clear.  The pairs in this list are much less ordered than in Māsarjawaih’s list.  In addition to the ordering of pairs with repeated materials (described above), Māsarjawaih’s list also groups pairs by non-medicinal characteristics, e.g. robs, electuaries, oils, clysters, galls, etc.

[3] Levey’s example translation of Paulus’ list is “For A, B.” Levey (1971b) p. 10.  That A is the focal medicine is consistent with the position of repeated materials across the lists of both Paulus and Māsarjawaih.

[6] For Māsarjawaih’s list translated from Arabic into English, see Levey (1971b) pp. 35-45.  The list describes the pairs with sentences of the form, “The substitute for A is B.”

[8] Ibn Baklarish was a leader in compiling information on medicines.  According to Ibn Abi Usaybiah:

Ibn Baklārish was a Jew, one of the greatest medical savants in Andalusia, who possessed vast experience and knowledge in the field of simple medicines. He served the dynasty of Banū Hūd as physician. Among his books is a “Synopsis of Simple Medicaments” with an index; this was composed in Almeria for al-Musta`īh bi-Allāh Abū Ja`far Ahmad ibn al-Mu`amin bi-Allāh ibn Hūd.

Adams, Francis. 1844. The seven books of Paulus Aegineta, tr. from the Greek, with a commentary embracing a complete view of the knowledge possessed by the Greeks, Romans, and Arabians on all subjects connected with medicine and surgery. London: Sydenham Society.

Levey, Martin. 1971b. Substitute drugs in early Arabic medicine. With special reference to the texts of Māsarjawaih, al-Rāzī, and Pythagoras. Stuttgart: Wissenschaftliche Verlagsgesellschaft.

[image] Thanks to the Historical Collections & Services, Claude Moore Health Sciences Library, University of Virginia, for making the above image available on the web.

2 thoughts on “logic of substitutes in ancient materia medica”