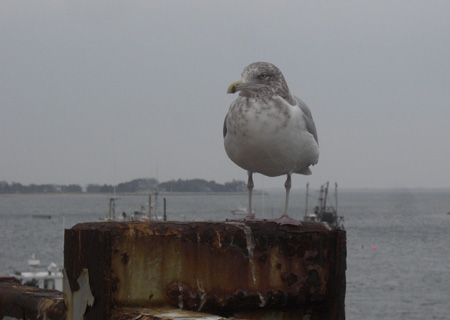 More than a millennium ago, a story of building a fire on a whale-turtle island was known across the span of Iran, Russia, England, Egypt, and Ethiopia.  A version of that story exists in the Physiologus, a second-to-fourth-century didactic Greek Christian text from Alexandria (Egypt).  A Latin translation made between the fourth and sixth centuries tells the story thus:

Physiologus spoke of a certain whale in the sea called the aspidoceleon {asp-turtle} that is exceedingly large like an island, heavier than sand, and is a figure of the devil.  Ignorant sailors tie their ships to the beast as to an island and plant their anchors and stakes in it.  They light their cooking fires on the whale but, when he feels the heat, he urinates and plunges into the depths, sinking all the ships.  You also, O man, if you fix and bind yourself to the hope of the devil, he will plunge you along with himself into hell-fire.[1]

A whale “urinating” and plunging into the depths seems to correspond to a whale blowing through its blowhole and then diving.  More generally, the Physiologus seems to have added  to earlier observations of nature broader interpretations, more abstract symbolic understandings, and moral teachings.[2]  The Physiologus was translated into Ethiopic, Armenian, Syriac, Arabic, and Old Church Slavonic from the fifth to tenth centuries.  A version of the story of building a fire on a whale-turtle island appears in the didactic Old English poem “The Whale,” preserved in the tenth-century Exeter Book.[3]  Its source is almost surely a version of the Physiologus.  By the tenth century, the Physiologus was one of the most widely known books in western Eurasia.[4] 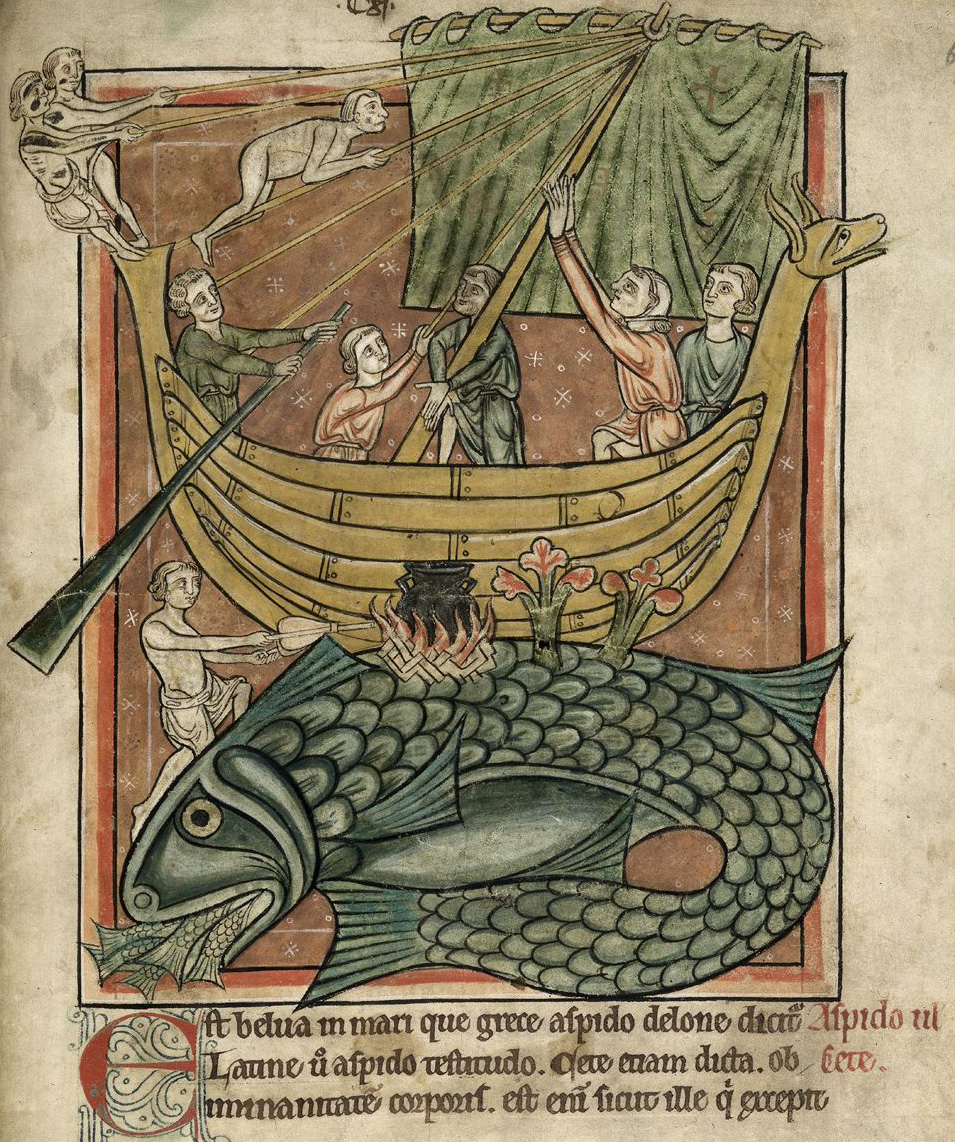 In the tenth century, along the Persian Gulf in present-day Iran, a sea captain recounted a different version of the story of building a fire on a whale-turtle island.  The sea captain claimed that he heard the story from another who said that he heard it from an old sailor.  In this Persian-Arabic version, some Persian sailors sailing from India encountered a strong storm that damaged their ship.  They managed to land on a small island containing no wood or water.  By the time they repaired their ship, the date had turned to the Persian New Year’s Day.  That meant celebrating the feast of Nowruz:

to celebrate it, {the sailors} took on to the island all the bits of wood they could find in the ship, palm leaves, and material, and set fire to them.  All of a sudden the island began to tremble.  As they were not far from the water, they threw themselves in and climbed aboard {their ship}.  Immediately the island sank into the sea, with such turbulence that they were almost drowned and had great difficulty in reaching safety.  They were filled with great terror.  For the island was nothing but a turtle asleep on the sea.  It had fled when it was awoken by the burning fire. [5]

The source for this story is probably the Physiologus.  However, the Physiologus’ didactic allegory of staking a new residence on top of the devil was transmitted to the Persian sea caption as just a sailor’s tale of wonder.  Scholarly literature in the ancient Islamic world often added moral teaching to earlier Greek stories.  The sea captain’s story shows moral teaching being discarded in the much different discursive circumstances of folk entertainment.[6]

The reception of the Physiologus’ story of building a fire on a whale-turtle island points to more general communications economics.  The Physiologus’ success in ancient communications markets benefited from both its moral orthodoxy and its entertainment value.  Its moral orthodoxy ensured that elites would employ scribes to copy it. Its stories of natural wonders, which could easily be shorn from its moral instruction, supported popular demand for it.  The Physiologus thus had a market position somewhat similar to college education in the U.S. today.

[1] Physiologus, XXXI. On the Whale, that is, the Aspidoceleon, trans. Curley (1979) pp. 45-6.  A less detailed version of the story occurs in a letter, on marvels of India, purportedly from Alexander to Aristotle (part of the Greek Alexander romance).  An account of the story that refers to the heat of cooking provoking the animal is included in the Babylonian Talmud.  See Hansen (2002) pp. 180-1. Al-Jāhiz (d. 869) in his Book of Animals criticizes sailors’ tales.  He refers to this story as the most fabulous and preposterous of them all (vol. VII, pp. 33-4).  Grunebaum (1953) p. 300.

[2] Aristotle’s History of Animals and Pliny’s Natural History are examples of earlier works providing much less abstractly interpreted descriptions of nature.  The former describes whales having blowholes, through which water was expelled (Bk 4, Ch. 10; Bk. 8, Ch. 2).  The latter describes massive sea creatures in the Indian Ocean (Bk. 9, Chs. 3-4).  With respect to more abstractly interpreted work, the Zoroastrian Avesta Yasna includes an account of the hero Keresaspa, “a youth of great ascendant, curly-haired, bludgeon-bearing,” cooking food on top of a beast.  The beast, scorched by the heat, flees, overturning the cooking pot and also putting to flight the hero-cook.  See Yasna, Ch. 9, sec. 11.  The Physiologus’ story of building a fire on a whale-turtle island differs significantly in setting and action from the Yasna’s story.  Contrary to the claim of Curley (1979) p. 83, I don’t think it likely that the Physiologus’ story has its germ in India from the Yasna’s story.  Note the peculiarity of Keresaspa being described as “curly-haired.”  Curly hair is much more characteristic of Africans and Greeks than Indians.  Perhaps describing Keresaspa as “a youth of great ascendant, curly-haired, bludgeon-bearing” indicates that the Avesta Yasna drew material from stories associated with Alexander the Great.

[4] See Curley (1979), Introduction.  The Physiologus was commonly incorporated into medieval bestiaries.  Well-known stories of the phoenix rising from ashes and the pelican feeding her young with her own blood are found in the Physiologus.

Landing on a island that is actually a large sea-creature became part of medieval European folklore and bestiaries. Stewart (2018). The ninth-century Voyage of Saint Brendan {Navigatio sancti Brendani}, chapters 21 and 27, tells of monks singing, kindling fires, voyaging on the backs of whales.

[5] Buzurg Ibn Šahriyār, trans. Freeman-Grenville (1981) p. 22.  This sea-captain’s account included additional naturalistic description of whales, such as:  “When the male couples with the female, it often takes place on the surface of the water.”  Whales in medieval thought came to be associated with lust.  See Wentersdorf (1983-84) pp. 364-5.

[6]  The story of building a fire on a whale-turtle island appears in the first voyage of Sindbad the Sailor.  In that voyage, it plays a pivotal role in a reversal of fortune, but it is not otherwise moralized.  Sindbad’s voyages seem to be mainly adventure-entertainment, with a general moral framework of reversal of fortune.  Sindbad’s voyages are set in Harun al-Rashid’s reign of the Abbasid caliphate (786-809).  The earliest surviving manuscript of Sindbad’s voyages is a Turkish manuscript from the seventeenth century.  The name Sindbad the Sailor points to the Indus River in present-day Pakistan.  While the date and origins of the narrative of Sindbad’s voyages are highly uncertain, Sindbad’s story of the whale-turtle island plausibly comes from the Physiologus.  Like Buzurg Ibn Šahriyār’s version, Sindbad’s version shows the story shedding moral interpretation in serving for folk entertainment.

[images] (1) Bird sitting on an ocean pier. Photo by Douglas Galbi. (2) Building a fire on a whale-island. Illumination in a bestiary. Painted about 1230-40 in England. From folio 69r of British Library, Harley Ms. 4751.

Stewart, Hannah, 2018. “The Devil in the Deep Blue Sea.” the iris: Behind the Scenes at the Getty. Published online (May 12) in Art & Archives: Book of Beasts.