The Bakhtīshū were a Christian family of Syrian-Persian physicians serving Abbasid caliphs.  Bakhtīshū ibn Jibrā’īl ibn Bakhthīshū (d. 870) became extraordinarily wealthy.  He was so wealthy that he could reverse the season for his pleasure, or at least so a story told.  Here’s what a scribe supposedly heard from his grandfather:

I visited Bakhtīshū on a very hot day and found him sitting in a place covered with several sheets of brocade, with a black cloth between each pair of embroidered sheets.  In the middle there was a dome covered with a gold and silver embroidered cloth, which showed gum wood dyed with rose water, camphor and sandal-wood. The physician was clad in a heavy Sa`īdī upper garment from Yemen and a silk robe. I was astounded at his apparel, but when I drew nearer to him in the dome, I started to shiver from intense cold. He laughed, ordered that I be brought an upper garment and a silk robe and then told his servant to uncover the sides of the dome. When they were uncovered, lo! There were doors opening off the dome, leading to areas filled with snow; there were servants blowing that snow and a great cold came forth, which had reached me. He then ordered his food. A most beautiful table was brought in, laden with exquisite things, lastly, roasted chickens were brought in, extremely well done. The cook came in and shook them all, and they fell apart. The physician said: “These chickens were raised on almonds and grain and pomegranate juice.”

I revisited him one very cold day during the midst of winter and found him dressed in a padded garment and a cover.  He was sitting in a cabin inside his palace, which was situated in a most beautiful garden. The cabin was covered with sable furs and had in it and on it sheets of dyed silk, felts from the Maghrib and leather hides from Yemen. In front of him was a gilded silver fire-pot alight, and a servant dressed in very refined brocade was burning Indian-wood in it. When I entered the cabin, I felt the heat to be very strong. He laughed and ordered a brocade tunic for me, then uncovered the sides of the cabin, and lo! There were rooms with iron windows beyond wooden openings and in them fire-pots containing tamarisk-charcoal. There were servants blowing this charcoal with bellows like those of the hammer-smiths.  He then ordered his food to be brought in, and it came as usual, all choice and clean. Some chickens were brought in also, white to the extreme, which I found unpalatable, for I was afraid they were raw. But the cook came in and shook them, and they fell apart. When I asked, the physician told me they were fed on peeled nuts and given sour milk to drink. [1]

The two parts of the story mirror each other.  Details in each part also seem to be carefully in parallel.  The story seems to be a deliberately constructed courtly tale, rather than an actual recounting of experience.  The point of the tale is clear: Bakhtīshū enjoyed fabulous luxury. 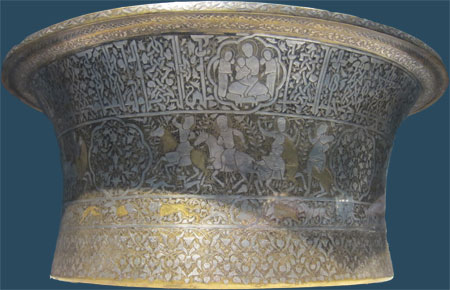 While Christians and other non-Muslims legally had inferior status (dhimmi status) in the Islamic world, Bakhtīshū was not the only Christian who gained high social status and great wealth.  Al-Jahiz (d. 869) describes Arab Christians as numerous.  He describes them as engaged in high-status occupations: theologians, physicians, and astrologers, and also secretaries, kings’ flunkeys, noblemen’s physicians, perfumers and money-changers.[2] Al-Jahiz declares with considerable resentment:

we know that the Christians now have costly mounts and thoroughbred horses, that they have packs of hounds, play polo, wrap themselves in madini, wear mulham and mutabbaqa {these are all types of expensive fabrics}, employ {Muslim} servants, and take as their names or kunyas Hasan, Husain, ‘Abbas, Fadl, and ‘Ali; all that now remains for them is to call themselves Muhammad and take the kunya of Abu al-Qasim {the Prophet’s father}.  Many Christians have forsaken the zunnar {girdle that dhimmis had to wear to identify themselves as such}, and others only wear it under their clothes. [3]

The resentment in this account centers on Christians’ formally inferior status not being realized in actual life in the ancient Islamic world.

The tale of Bakhtīshū’s great wealth, in contrast, includes no sense of an inappropriate position for a Christian.  That tale evokes only the wonder and marvel of fabulous luxury.