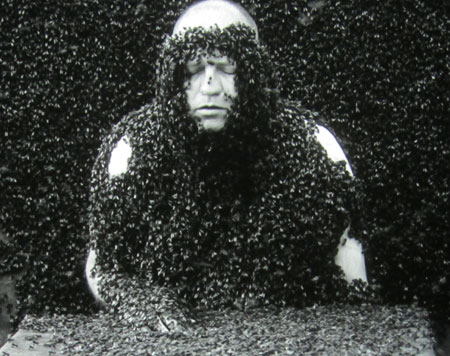 Jeroen Eisenga’s powerful performance art film, Springtime 2009-11, offers profound insights into the bureaucratic condition.  Eisenga sat at a desk while 250,000 bees gradually enveloped his body.  If he had stood up, he probably would have gotten stung.  That’s exactly like the situation in many bureaucrats’ desk jobs.

An essential bureaucratic skill is being able to sit through all kinds of changes and difficult conditions.  Sitting through meetings is good practice, but the importance of sitting goes far beyond meetings.  A place in a bureaucratic organization is a seat.  Keep sitting in your seat, or you risk losing your place.  Kids and other non-professionals who have to sit for a long period often start to squirm.  Top bureaucrats don’t squirm even after sitting for years.  They placidly and implacably meditate upon the next report to be produced and the best color for its cover sheet.

In other bureaucratic issues this month, Michael Rosenblum observes that Twitter is wrecking the elections.  Debates are now focused on producing good 140-character tweets.  The political situation was much better in the past:

When Lincoln and Douglass debated for the Illinois Senate seat they engaged in 7 debates. Each lasted for hours. Each candidate presented their position for 60 minutes, followed by a 90 minute rebuttal and a 30 minutes rejoinder. Plus cross-questioning.

Audiences sat in rapt attention throughout the entire 7 hour event.

The fundamental problem today is lack of bureaucratic education in the schools and colleges.  Kids should be trained to sit through a series of lengthy lectures.  A seven-hour debate is roughly equivalent to seven lecture courses in a day.  Most kids now have less than five courses per semester.  The need for reform is obvious.

Scott Adams, who writes a serialized graphic novel on bureaucratic procedures, also authors a blog filled with new ideas and imaginative thinking.  That stark inconsistency should make you suspicious.  Adams apparently does not have the natural disposition to provide true insight into bureaucracy.

Despite numerous programs to lessen discrimination against bureaucrats, much work remains to be done.  Consider the situation in the 31st century:

Bureaucrats in the 31st century are usually members of the Central Bureaucracy handling financial, legal, and other business matters in New New York, or Product Inspectors at Mom’s Friendly Robot Company working in Tijuana, although this is less common.

These people are often discriminated by others, and have been described as “faceless bean counters, who blend into the woodwork”. There is a numerous list of bureaucrats, and Hermes Conrad (bureaucrat grade 36) is the most wellknown of them.

This situation highlights the vital importance of the Carnival of Bureaucrats.  We intend to continue defending and celebrating bureaucrats through the 31st century and beyond.