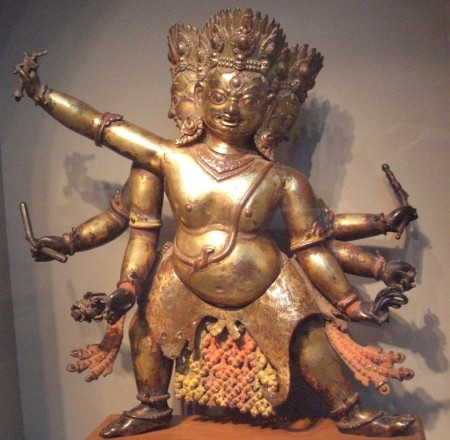 In his extraordinary study of India, eleventh-century Muslim scholar al-Biruni reported a story explaining the ancient origin of idols in India:

Another story of theirs {the Indians} is the following :—Brahman had a son called Narada, who had no other desire but that of seeing the Lord.  It was his custom, when he walked about, to hold a stick.  If he threw it down, it became a serpent, and he was able to do miracles with it.  He never went without it.  One day being engrossed in meditation on the object of his hopes, he saw a fire from afar.  He went towards it, and then a voice spoke to him out of the fire: ” What you demand and wish is impossible.  You cannot see me save thus.”  When he looked in that direction, he saw a fiery appearance in something like human shape.  Henceforward it has been the custom to erect idols of certain shapes. [1]

Both Hebrew scripture and the Qur’an describe Moses throwing down his staff (rod / stick) and it changing into a serpent.  According to those texts, Moses performed miracles with his staff.  He struck with his staff the Nile River, and its water turned into blood.  Moses struck with his staff a rock in the wilderness, and the rock gushed forth with drinking water.  Moses also saw a fire and heard the voice of the Lord coming from within the fire.  Moreover, Moses believed that if he looked upon the face of the Lord, he would fall dead.[2]  These Mosaic events in Hebrew scripture and the Qur’an parallel events in the story of Brahman’s son Narada.

The last two sentences in the story of Brahman’s son Narada shift to a sharp clash with Hebrew scripture and the Qur’an.  Both Hebrew scripture and the Qur’an strongly and repeatedly condemn idols and idolatry.  For example, when Moses found the Israelites worshiping a golden calf, he, outraged, “burned it with fire, ground it to powder, scattered it on the water, and made the Israelites drink it.”[3]  In the story of Brahman’s son Narada, the Mosaic parallels temporally explain the origin of Indian idolatry.  Al-Biruni was a devout Muslim.  The concluding change in moral direction would have been obvious to al-Biruni.

The story of Brahman’s son Narada wasn’t for al-Biruni a satisfying explanation of Indian idolatry.  According to al-Biruni, common, uneducated persons are universally attracted to the sensible world and pictorial representations.[4]  Al-Biruni believed that the origin of idolatry was over-development of common practice:

It is evident that the first cause of idolatry was the desire of commemorating the dead and of consoling the living; but on this basis it has developed, and has finally become a foul and pernicious abuse. [5]

Al-Biruni himself valued most highly abstract verbal knowledge.  He admired the well-educated Indian elite whom he perceived to have values like his:

For those who march on the path to liberation, or those who study philosophy and theology, and who desire abstract truth which they call sâra, are entirely free from worshipping anything but God alone, and would never dream of worshipping an image manufactured to represent him. [6]

Study of philosophy and theology are much different from sacred stories of Moses.  Al-Biruni’s Indian informant may have been responding tactically to al-Biruni’s Muslim’s beliefs in providing the account of Brahman’s son Narada.  But a Mosaic story with an unusual turn didn’t convince al-Biruni of the sacred origin of Indian idolatry.

[1] Al-Biruni’s Indica, trans. Sachau (1910) p. 116.  The story is from Chapter XI: “About the Beginnings of Idol-Worship and a Description of Individual Idols.”

It is well known that the popular mind leans towards the sensible world, and has an aversion to the world of abstract thought which is only understood by highly educated people, of whom in every time and every place there are only few. And as common people will only acquiesce in pictorial representations, many of the leaders of religious communities have so far deviated from the right path as to give such imagery in their books and houses of worship, like the Jews and Christians, and, more than all, the Manichaeans. These words of mine would at once receive a sufficient illustration if, for example, a picture of the Prophet were made, or of Mekka and the Ka’ba, and were shown to an uneducated man or woman. Their joy in looking at the thing would bring them to kiss the picture, to rub their cheeks against it, and to roll themselves in the dust before it, as if they were seeing not the picture, but the original, and were in this way, as if they were present in the holy places, performing the rites of pilgrimage, the great and the small ones.

His example of popular Muslim attraction to pictorial representations emphasizes the universality of the practice.  Much other evidence also indicates that pictorial and multi-sensuous representations are relatively popular.

One thought on “Mosaic story explains idols in ancient India?”