In the first half of the tenth century, a shipmaster from the Khuzestan region on the Persian Gulf wrote a collection of tales called The Book of the Wonders of India.  The author’s preface declared:

God — blessed is his name and glorious his praise — created his marvels in ten parts, and assigned nine of them to the eastern pillar of the earth, and one each to the other three pillars, west, north, and south.  Then to China and India he assigned eight parts, and the one remaining to the Orient. [1]

The author seems to assume a square earth; describes God’s marvels as having ten parts, but itemizes them as twelve parts; and apparently divides the east into China, India, and the Orient.  Apart from these technical difficulties, the main point is clear: China and India (where India means the region of present-day India and Pakistan) have by far the largest share of the earth’s marvels.

Wide-ranging communication across Eurasia long predates the Internet, telephone systems, and postal systems.  Nomads of central Asia have carried goods and ideas from Persia to China for thousands of years. About 2300 years ago, Alexander the Great fought his way from Greece to the Indus River.  Roman woman 2000 years ago wore dresses made from Chinese silk.  About 570, the Persian physician Borzūya translated and adapted into Middle Persian Indian texts.  These included the Panchatantra, known in Sanskrit perhaps 2200 years ago.  About 750, ibn al-Muqaffa translated Borzūya’s adaptation of the Panchatantra into Arabic and expanded it to produce Kalīlah wa Dimnah.  By 1600, ibn al-Muqaffa’s adaptation had been further translated into Syriac, Greek, Hebrew, Latin, Spanish, Italian, German, English, Old Slavonic, and Czech.

The early Abbasid caliphate, which stretched from Egypt to Afghanistan, sought to acquire knowledge from India.  The Barmakid family from the cosmopolitan and highly cultured city of Balkh in present-day Afghanistan rose to prominence in Abbasid caliphs’ courts in Baghdad late in the eighth century.  The Barmakids encouraged Indian scholars to travel to Baghdad.  The Barmakids also commissioned translations of Indian books from Sanskrit into Arabic.  With the Barmakids among the Abbasid elite, Indian and Greek physicians vied for prominence in the caliph’s court. 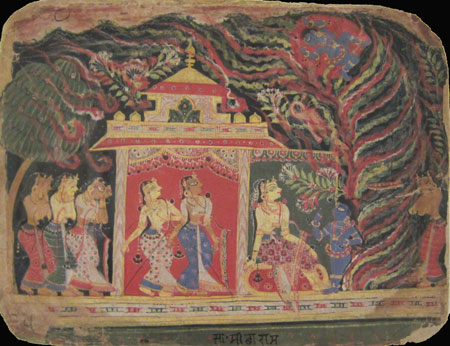 Although courtly intrigue led to the Barmakids being expunged from the caliph’s court in 803, respect for Indian scholarly and cultural achievements endured in the ancient Islamic world.  Al-Jahiz was a prominent writer and scholar in the Abbasid court from 816 to about 869.  He described Indians as preeminent in astronomy, mathematics, and medicine.  He praised Indian singing, dancing, painting, sculpture, their invention of chess, their development of calisthenics and martial arts, and their use of “scimitars from Burma.”  He noted that India has a large corpus of poetry and epics, and that Indians are well-versed in literature and philosophy.  He declared that Indians are excellent cooks.  Al-Jahiz praised Indians from a highly abstract level of personality down to highly specific details of everyday life

They {Indians} are courageous, judicious and possess unequaled patience.  They have beautiful clothes and civilised customs, such as toothpicks, toothbrushes, hairdressing, hair colouring and correct posture.  They possess beauty, grace and wit and have a pleasant smell.  The beauty of their women is legendary.  It is from India that aloes wood — the incomparable gift of kings — comes.  Meditation came originally from there, as did certain spells that render poisons harmless.

Al-Jahiz, who grew up in Basra, described India business skills with a realistic, personal example plausibly from first-hand observation:

Currency dealers only entrust their cash and the running of their businesses to first or second generation Sindis {Indians} because experience shows them to be the most competent, careful and reliable in matters of exchange.  You rarely see a man of Khurasani or Byzantine origin in charge of, or holding the keys to, a currency dealer’s safe.  When the dealers and spice merchants of Basra saw the profits in cash and real estate that Faraj Abū Rawh realised for his master, they all went out and bought Sindi slaves to get themselves a piece of the action.  This is just one example of Sindi business acumen. [2]

Al-Jahiz served his readers with a variety of enjoyable and informative reading.  In describing India, al-Jahiz seems to have combined hyperbolic praise of abstract qualities with realistic, factual details.

I have found it very hard to work my way into the subject, although I have a great liking for it, in which respect I stand quite alone in my time, and although I do not spare either trouble or money in collecting Sanskrit books from places where I supposed they were likely to be found, and in procuring for myself, even from very remote places, Hindu scholars who understand them and are able to teach me. [4]

For the reader must always bear in mind that the Hindus entirely differ from us in every respect, many a subject appearing intricate and obscure which would be perfectly clear if there were more connection between us.  … they  differ from us in everything which other nations have in common.  … all their fanaticism is directed against those who do not belong to them — against all foreigners.  They call them mleccha, i.e. impure, and forbid having any connection with them, be it by intermarriage or any other kind of relationship, or by sitting, eating, and drinking with them, because thereby, they think, they would be polluted.  They consider as impure anything with touches the fire and the water of a foreigner; and no household can exist without these two elements.  Besides, they never desire that a thing which once has been polluted should be purified and thus recovered, as, under ordinary circumstances, if anybody or anything has become unclean, he or it would strive to regain the state of purity. They are not allowed to receive anybody who does not belong to them, even if he wished it, or was inclined to their religion. This, too, renders any connection with them quite impossible, and constitutes the widest gulf between us and them. [5]

We can only say, folly is an illness for which there is no medicine, and the Hindus believe that there is no country but theirs, no nation like theirs, no kings like theirs, no religion like theirs, no science like theirs. They are haughty, foolishly vain, self-conceited, and stolid. They are by nature niggardly in communicating that which they know, and they take the greatest possible care to withhold it from men of another caste among their own people, still much more, of course, from any foreigner. According to their belief, there is no other country on earth but theirs, no other race of man but theirs, and no created beings besides them have any knowledge or science whatsoever. Their haughtiness is such that, if you tell them of any science or scholar in Khurasan and Persis {provinces of present-day Iran}, they will think you to be both an ignoramus and a liar. If they traveled and mixed with other nations, they would soon change their mind, for their ancestors were not as narrow-minded as the present generation is. [6]

Al-Biruni displayed his great scholarly capabilities in part through his work on India. He wrote twenty books on India, including his massive opus, An Accurate Description of All Categories of Hindu Thought.  A highly learned German scholar who translated al-Biruni’s work in the 1880s observed, “certainly we do not know of any Indianist like him, before his time or after.”[7]

Indians became highly exotic in the ancient Islamic world.  The engagement with India evident in the Barmakids’ positions in the early Abbasid caliphate and in al-Jahiz’s essay became the intellectual struggle that al-Biruni’s work documents.  Few were able or interested in building upon al-Biruni’s huge effort.[8]  The exotic residents that Europeans subsequently encountered in the Americas the Europeans called “Indians.”  Western Eurasian civilization was much more similar to that of Indians to the east than to those to the west across the Atlantic.  Disengagement from India in the ancient Islamic world more plausibly resulted from a reconfiguration of scholarly interests than from deep cultural differences.

[2] Al-Jahiz’s description of India, including the above two quotes, is from Kitab fakhr al-sudan ‘ala al-bidan, trans Colville (2002) p. 49 (The Superiority of Blacks to Whites).  Al-Jahiz included Indians and Arabs among blacks.

Mahmud utterly ruined the prosperity of the country, and performed there wonderful exploits, by which the Hindus became like atoms of dust scattered in all directions, and like a tale of old in the mouth of the people. Their scattered remains cherish, of course, the most inveterate aversion towards all Muslims.

{a scholar-teacher asked me to write} what I know about the Hindus as a help to those who want to discuss religious questions with them, and as a repertory of information to those who want to associate with them. In order to please him I have done so, and written this book on the doctrines of the Hindus, never making any unfounded imputations against those, our religious antagonists, and at the same time not considering it inconsistent with my duties as a Muslim to quote their own words at full length when I thought they would contribute to elucidate a subject. If the contents of these quotations happen to be utterly heathenish, and the followers of the truth {meaning Muslims} find them objectionable, we can only say that such is the belief of the Hindus, and that they themselves are best qualified to defend it.

This book is not a polemical one. I shall not produce the arguments of our antagonists in order to refute such of them as I believe to be in the wrong. My book is nothing but a simple historic record of facts. I shall place before the reader the theories of the Hindus exactly as they are, and I shall mention in connection with them similar theories of the Greeks in order to show the relationship existing between them.

Id. p. 7.  A simple historic record of facts is rather different from a diplomatic treatise.  Moreover, al-Biruni considered understanding between Muslims and Hindus to be highly difficult, if not impossible.  This description is best interpreted as expressing al-Biruni’s peaceful scholarly purpose in contrast to Mahmud of Ghazna’s conquests.  A friend’s request to write is a classical rhetorical figure that Galen commonly used.  See König (2009).

As they {Indians} overemphasize purity to the point of exagerration and avoid impurity as far as possible, there is no possibility of a dialogue between us.

Trans. Said (1973) p. 7.  I’ve replaced the words cleanliness/uncleanliness with purity/impurity in the translation.  At this same time, al-Biruni’s described a Hindu doctor’s successful treatment of a difficult illness. Al-Biruni declared:

These people {Indian doctors} employ a Hippocratean kind of treatment.  Whatever they have adopted they are loath to change, even though the circumstances might have changed.  I have seen them use wondrous treatments but their description would be too long.

[8]  The Mughal Empire under Akbar was open to Indian culture.  The influence of Indian art can be seen in the magnificent Hamzanama created under Akbar.  On Muslim scholars who sympathetically considered Indian religion, see Friedmann (1975).

König, Jason. 2009.  ‘Conventions of prefatory self-presentation in Galen’s On the Order of my Own Books‘, Ch. 2 in Gill, C., Wilkins, J. and Whitmarsh, T. (eds) Galen and the World of Knowledge. Cambridge University Press.

One thought on “views of India from the ancient Islamic world”