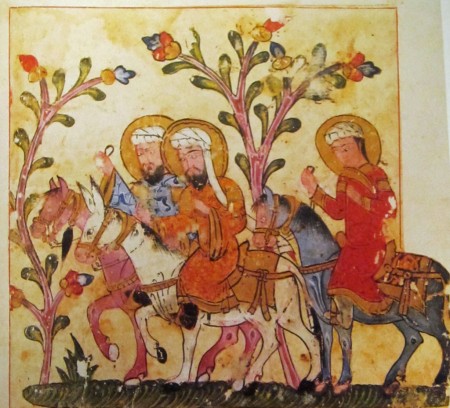 In the mid-sixth century, the Persian physician Borzuya journeyed to India in search of medicine to revive the dead.  Borzuya was the leading physician to Persian King Khosrau Anushirawan.  He came from an elite family, had a scholarly education in medicine, and was respected as a scholar and a sage as well as a physician.[1]  Borzuya’s journey seeking medicine to revive the dead indicates that reviving the dead was a reasonable interest in professional medicine in the ancient world.  The outcome of Borzuya’s journey was unexpected: he delivered to Anushirawan the still-famous book Kalilah wa Dimnah and turned to a life of piety and asceticism.

Reports that certain physicians could revive the dead circulated in the ancient world.  Christians regard Jesus of Nazareth as a physician in the sense that healing the sick was a central aspect of what Christians believe that Jesus did.  Christians believe that Jesus rose from the dead and could raise others from the dead.  Jesus did not, however, achieve professional success among physicians of his time.  Jesus never was appointed to a position of medical authority, acquired no wealth from practicing medicine, and was crucified as a criminal.

One day Borzuya submitted to the king a letter in which he mentioned that he found in the books of the sages that in the land of the Indians there are mountains on which shrubs and different kinds of plants grow, such that if they are recognized, and gathered, and blended, then one could extract from these plants a medicine with which the dead are brought to life.  He asked the king to allow him to search for them and to aid him by giving him the money necessary for this undertaking and to write letters on his behalf to every one of the kings of the Indians asking them to assist him in his task. [2]

Borzuya described to the king in writing his interest in reviving the dead, related this proposal to learning from books of sages, and described technical aspects of professional physicians’ processing of materia medica.  He requested funding for his proposal and proper documentation to allow the project to secure necessary cooperation from other officials.  The king responded to Borzuya’s request with similar professionalism:

The king agreed to this and ordered that what he had requested be given to him and he prepared gifts for the kings whom Borzuya was to meet, as was the custom of kings when they sent ambassadors to one another on account of their business.

Securing medicine to revive the dead wasn’t treated as an extraordinary proposal. Borzuya and the king treated that proposal as a reasonable interest of a professional physician acting in a professional way.

Borzuya set out on this business and paused for nothing until he arrived in the land of the Indians.  He handed over the letters and the things which he had with him to every one of those kings and asked their permission to search for that thing on account of which he had come to them.  All of them granted permission to do this and they let him go about his search in complete freedom in the whole country and in all of the mountains.  And they supplied him with guides, helpers, and instruments.

Borzuya persisted in his search for twelve months gathering the shrubs and plants which grew in those mountains and mixing them with the medicines described in his books and supervising everything diligently and then applying his concoction to the dead, but without seeing any corpse restored to life.

Not getting results is a common fear among scientists who secure a large grant.  How will the funder respond?  How will the scientist have the credibility to get grants in the future? Borzuya struggled with these universal scientific concerns:

Borzuya began to have doubts about his books and to suspect them and have no faith in what they said.  But at the same time it seemed intolerable to him that he should return to the king a failure, a liar, and in error.

Borzuya recognized that the medical profession’s knowledge is ultimate futile.  That reality is difficult to recognize socially and would not absolve Borzuya from responsibility for his project’s failure.

Borzuya vindicated his project to revive the dead by pivoting to a different field of knowledge. Borzuya shifted to work on eternal truths of a relatively abstract type.  He translated from Sanskrit into Persian wisdom in the form of stories of animals acting like humans. Borzuya thus produced the book Kalilah wa Dimnah.[3]  Over the next millennium, that book became widely known and highly influential around the world.  By the modern scientific standard of publication influence, Borzuya’s work to find medicine to revive the dead was very successful.

The dead who are brought to life with these medicines are the ignorant among men who have no knowledge, but when they are treated with knowledge and made to understand things and when they make things easy by learning from these books which owe their existence to those scholars, then it is not long until they know and see.

After his journey to India, Borzuya adopted a life of piety and asceticism.  He came to know that “the dead could be revived only by that king who is eternal and rules all things.”[4]  While Borzuya began his journey as an elite, highly professional physician, he finished it standing apart from the professional and religious institutions of his time.  Reviving the dead had become a matter of wisdom and spirituality.

[1] These biographic details are from Borzuya’s autobiography in surviving translations of Kalilah wa Dimnah and the short (oldest) version of Burzuya’s journey to India.  For an English translation of Borzuya’s autobiograply from a tenth or eleventh century translation from Arabic into Syriac, Keith-Falconer (1885) pp. 248-68.  For an Arabic text and English translation of the short version of Borzuya’s journey to India, Blois (1990) pp. 81-7.  Keith-Falconer (1885), p. xxvi, states that Ibn Abi Usaibia states that Borzuya was born in Merv and was the personal physician to Anushirawan.  That’s not in the entry for Burzuya in HP p. 531. There is no other known surviving evidence directly concerning Borzuya’s life.  In scholarly work, Borzuya is variously transliterated as Burzoy or Burzoe (Middle-Persian transliteration), Barzawayh (Arabic transliteration), and Burzuya (neo-Persian transliteration).  The transliteration in the Encylopaedia Iranica is Borzūya.  I’ve used a slightly simplified version of that transliteration.

[2] Short version of Borzuya’s voyage to India, trans. from Arabic in Blois (1990) p. 81.  Id. argues convincingly that this version is a translation of a sixth-century Middle Persian text.  Subsequent quotes, unless otherwise noted, are from the short version of Borzuya’s voyage, trans. id. pp. 81-2.  I’ve substituted the transliteration Borzuya for Burzoy in the quoted text for consistency.

Stories from Kalilah wa Dimnah were widely known in medieval Europe through Gesta Romanorum. For example, the longer version of Borzuya’s autobiography includes the story of thieves tricked into believing that they could enter a house on a moonbeam. See, e.g., from Syriac trans. Keith-Falconer (1885) pp. 254-6. That story became Tale 136 in Gesta Romanorum, from Latin trans. Swan & Hooper (1876) pp. 241-2. Tale 119 in Gesta Romanorum (the story of the ungrateful seneschal who fell in a pit with a lion, monkey, and serpent and was rescued by a woodcutter) is also from Kalilah wa Dimnah.

I read in an Indian book that a plant grows in the mountains there that looks like silk from Byzantium.  If someone gathers this plant and prepares it in the correct way and then sprinkles it on the dead, they will begin to talk.  Now with the king’s permission, I shall begin this difficult journey; I shall employ all my knowledge to see if I can find this wonder.

The king responded, “This is not possible, but we should inquire into it nevertheless.”

He {Borzuya in India} gathered plants that were dry, fresh, withered, or flourishing, and he made various concoctions from them; but when he sprinkled these on the dead not a single corpse came to life, and it was clear that the mixtures were powerless.

Trans. Davis (2007) pp. 704-5 (both quotes above).  Blois (1990) convincingly argues that the long version of Borzuya’s journey to India is a later Arabic adaptation and expansion.  It replaces the quest for medicine to revive the dead with a quest to get directly the book Kalilah wa Dimnah.  The long version is common in surviving Arabic texts of Kalilah wa Dimnah.

Keith-Falconer, I. G. N, ed. and trans. 1885.  Kalilah and Dimnah: or, The Fables of Bidpai: being an account of their literary history. Cambridge: University Press.