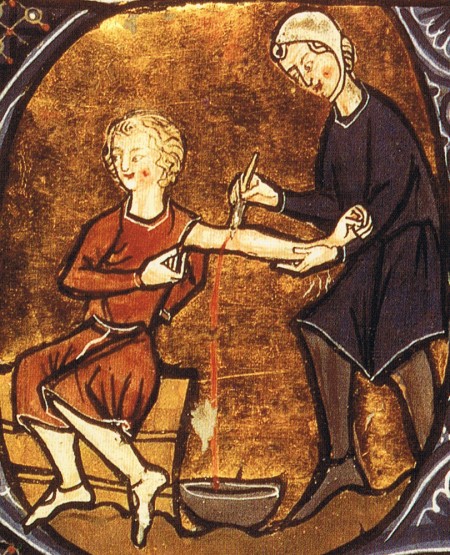 According to Christian scripture, Jesus of Nazareth and his disciples were popularly acclaimed healers within a highly competitive medical services market.  A Syriac Christian text, probably from no later than the early fifth century, addressed Jesus as “Jesus, the Good Physician.”  The epithet “the Good Physician” was not just abstract spiritual praise.  In the Roman Empire, bad physicians traded on complex, intellectually prestigious, costly, and dangerous treatments to amass great wealth for themselves.  Jesus the Good Physician healed without cost through a word or a touch.

Bad physicians converted medical knowledge into prestigious professional secrets.  Once upon a time, persons grateful for cures inscribed those cures on the walls of the temple of Asclepius (Asculapius), the god of medicine.  Hippocrates copied the inscribed cures into books.  After the temple of Asclepius burned down, these once-public inscriptions became the Hippocratic school’s professional trade secrets.  The public came to attach great intellectual prestige to Greek learning.  Greek medical treatises and Greek doctors then dominated the Roman medical business.  That is the professional history of medicine according to the Roman statesman and encyclopedist Pliny the Elder, writing about the time of Jesus.[1]

There was no limit to the profit from medical practice, for one of the pupils of Hippocrates, Prodicus, born in Selymbria, founded iatraliptice (“ointment cure”), and so discovered revenue even for the anointers and drudges of the doctors.

According to Pliny, no art brings greater monetary profits to practitioners than does medicine.  Pliny explained that some believe nothing is beneficial unless it is costly.  Pliny described physicians receiving huge incomes and amassing enormous wealth from serving emperors.

their out-of-the-way use of hot water in sickness, their strict fasts for patients, who when in a fainting condition are stuffed with food several times a day, their thousand ways of changing their minds, their orders to the kitchen, and their compound ointments, for none of life’s seductive attractions have they refrained from incorporating. … There is an elaborate mixture called theriac, which is compounded of countless ingredients, although Nature has given as many remedies, anyone of which would be enough by itself.  The Mithridatic antidote is composed of fifty-four ingredients, no two of them having the same weight, and some are prescribed at one sixtieth part of one denarius.  Which of the gods, in the name of Truth, fixed these absurd proportions?  No human brain could have been sharp enough. It is plainly a showy parade of the art, and a colossal boast of science. And not even the physicians know their facts.  I have discovered that instead of Indian cinnabar there is commonly added to medicines, through a confusion of names, red lead, which, as I shall point out when I discuss pigments, is a poison.

Pliny described one physician as successfully gaining a large following by combining medicine with astrology.  A competing physician responded by substituting cold baths for hot baths “even during the winter frosts.”  Such innovations did not serve sick patients:

There is no doubt that all these, in their hunt for popularity by means of some novelty, did not hesitate to buy it with our lives.  Hence those wretched, quarrelsome consultations at the bedside of the patient, no consultant agreeing with another lest he should appear to acknowledge a superior.  Hence too that gloomy inscription on monuments: “It was the crowd of physicians that killed me.” Medicine changes every day, being refurbished again and again, and we are swept along on the puffs of the clever brains of Greece.

Physicians came not just for the sick, but also for the healthy.  Physicians governed daily life:

Those, I say, have ruined the way of life of the Empire. I mean the practices to which we submit when in health — wrestlers’ ointments, as though they were intended to treat ill health; broiling baths, by which they have persuaded us that food is cooked in our bodies, so that everybody leaves them the weaker for the treatment, and the most submissive are carried out to be buried; the sips taken fasting; vomitings followed by further heavy drinks; effeminate depilations produced by their resins, and even the vaginas of women exposed to public view.

The problem is not just bad physicians, but also human nature:

The medical profession is the only one in which anybody professing to be a physician is at once trusted, although nowhere else is an untruth more dangerous. We pay however no attention to the danger, so great for each of us is the seductive sweetness of wishful thinking.

Within common understanding of the physician’s heart is personal care.  The sick and the well yearn for a good physician.

Ancient followers of Jesus understood Jesus to be a good physician in ways that contrast specifically with Pliny’s description of bad physicians.  In the Gospel of Mark, a woman suffering from an issue of blood for twelve years received no benefit from the services of other physicians:

She had endured much under many physicians, and had spent all that she had; and she was not better, but rather grew worse.

She was healed just by touching Jesus’ clothes.

Jesus and other outstanding physicians were believed to be capable of raising the dead.  In the ancient medical business, what made Jesus distinctive as a good physician was more than a reputation for raising the dead.  In a Syriac text probably from no later than the early fifth century, Abgar, the King of Edessa, wrote to Jesus:

Abgar Ukkama, to Jesus, the Good Physician, who has appeared in the country of Jerusalem. My Lord: Peace. I have heard of you and of your healing, that it is not by medicines and roots that you heal, but by your word you open the eyes of the blind, you make the lame to walk, you clean the lepers, and you make the deaf hear.  And unclean spirits and lunatics, and those tormented, them you heal by your word.  You also raise the dead. [3]

In this text, raising the dead is a supplementary medical capability.  King Abgar had a physical illness.  His first interest was in the sort of healing usually done with medicines and roots.  Jesus could heal with just words: “only say the word, and my servant will be healed {μόνον εἰπὲ λόγῳ καὶ ἰαθήσεται ὁ παῖς μου}.”[4]  Abgar requested Jesus to come and heal him.  Jesus, focused on his primary mission in Jerusalem, promised to send one of his disciples to Edessa to heal Abgar.  The disciple who went to Abgar was Addai the Apostle.  Addai was one of the seventy-two first apostles of Jesus.  Addai, with a touch of his hand, healed Abgar instantly.  Addai then refused to take any gold and silver for his healing service.  Instead, he proclaimed publicly the new knowledge of Jesus.  Simple, costless healing, without effort to conceal professional knowledge, characterized Jesus and his apostle Addai as good physicians.[5]

[1] Pliny the Elder, Natural History, Latin text and English translation from Rackham, Jones & Eichholz (1949), Bk. 29, sec. 2.  Pliny’s history appears to be similar in form to recent scholarly work on discrimination against men on sinking ships.  Nutton (2013), p. 168, describes Pliny as having provided a “magnificently malicious account of the crimes and follies of the medical profession.”  The dominance of Greek medicine was real.  More than 95% of doctors known to have worked in Italy or the western Latin provinces of the Roman Empire before 100 GC had Greek names.  Id.  All the subsequent references and quotes, unless otherwise noted, are from Pliny, Natural History, Bk. 29, secs. 1-9.  I’ve made minor stylistic changes to some of the quoted translations for ease of reading.

[2] Mark 5:26.  Luke, a physician according to Christian tradition, omits that the woman had endured much {suffering} under physicians’ treatments and had only gotten worse.  Luke 8:43.  Matthew omits all reference to physicians in this story.  Matthew 9:20.

[3] The Doctrine of Addai, trans. from Syriac in Phillips (1876).  I’ve modernized the English of the translation.  The subsequent account above is from the Doctrine of Addai.  Abgar’s letter to Jesus probably isn’t historical.  In any case, it contains an early Christian understanding of Jesus.  Subsequently Addai refers to Jesus as “Jesus Christ, the Physician of troubled souls, and the Saviour of future life, the Son of God.”  The context backgrounds mundane healing practice and highlights Christian doctrine.  For a general review and analysis of the Doctrine of Addai, see Griffith (2003).  On the rise of Christianity in Edessa and Syria, El-Badami (2006).

[5] In a medieval Jewish story, a demon at a heathen (Christian) medical shrine says to a Jew who came there for healing:

If you are Jewish, why have you come here?  Can a Jew traffic in idolatry?  Don’t you know that heathen rites have nothing real in them?  It is for this reason that I am misleading them, so they will cling to error, and they’ll have no portion in the world to come.  But you, why have you run to alien worship instead of standing up to pray before the Holy One, blessed be He, who is the one to cure you?  You should know that by tomorrow your time had come to be healed, but because you have done this, you will never find a cure.  Therefore, do not trust in any mortal being, but rather in the Holy One, blessed be He — for He, this kingly God, is a physician who heals for free!

Trans. Rosenberg (1998) p. 97 (on 2nd commandment).  Despite Jesus healing for free, the sale of blessings and unctions for the sick became deplorably prevalent in the medieval Christian church.

Griffith, Sidney H. 2003. “The Doctrina Addai as a Paradigm of Christian Thought in Edessa in the Fifth Century.” Hogoye Journal of Syriac Studies 6.2: 269-292.

Phillips, George, ed. and trans. 1876. The doctrine of Addai, the Apostle: now first edited in a complete form in the original Syriac, with an English translation and notes. London: Trübner.

One thought on “Jesus the good physician amid bad ancient medicine”