An early sixth-century edition of Dioscorides De Materia Medica and the circa-800 Book of Kells are merely two of many sumptuous books that existed in antiquity.  In a fire in Rome about 192, Galen lost many books, including “dearest to him — the books written on white silk, with black covers, for which he had paid a high price.”[1]  The Romans imported Chinese silk via Egyptian ports after the Roman conquest of Egypt in 30 BGC.  In Rome, silk was a luxury which, among other uses, provided transparent clothes for women.[2]  Galen’s silk books were probably illuminated Chinese scrolls.  Such books would have been exotic and precious to the Romans.

Illuminated manuscripts that have survived from the European Middle Ages are examples of an ancient tradition of manuscript illumination.  In mid-ninth-century Baghdad, Hunayn ibn Ishaq copied text from:

works of the ancients in letters of purple, which is a red colour like wine, written with gold and silver, and letters written in gold, and designs written in other colours.  At the beginning of the volume was a picture of the philosopher on a couch, and the pupils were represented in front of him.  Till the present day the Greeks {Byzantines} do this with their books and psalters, writing (them) with gold and silver in letters of these colours, with a picture of the wise man represented at the beginning.  If the volume contained several discourses, a distinction was made between each, and a picture of each philosopher was represented before his words.  The books were covered with skins of leather and shagreen {a fancy binding material} in gold and silver.[3]

About 938, the Byzantine Emperor Romanos gave Caliph `Abd al-Rahmān “gifts of great value, including the book of Dioscorides, with pictures of herbs in the marvelous Byzantine style.”[4]  The Byzantine style apparently meant beautifully illustrated.

Humans have highly valued knowledge, whether associated with persons called shamans or philosophers, since the beginning of humanity.  Luxury goods are part of the common human currency of status marking.  After the invention of writing about 5000 years ago, artifacts of knowledge made for particularly potent luxury goods. 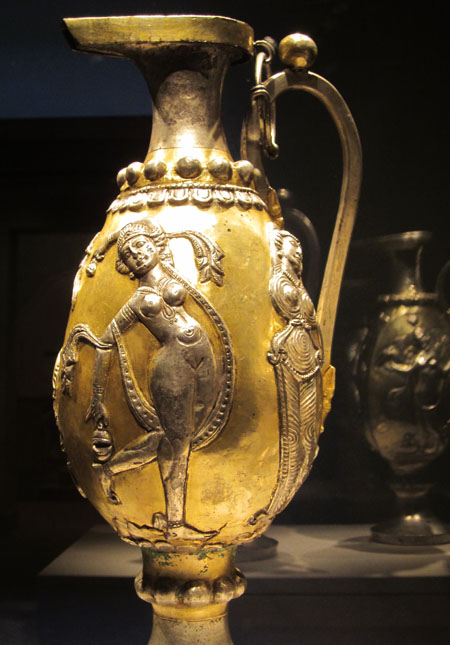 [2] See Wikipedia on Asian silk in the Roman Empire.  Seneca the Younger early in the first century declared, “I can see clothes of silk, if materials that do not hide the body, nor even one’s decency, can be called clothes… Wretched flocks of maids labour so that the adulteress may be visible through her thin dress, so that her husband has no more acquaintance than any outsider or foreigner with his wife’s body.” Declamations, vol. I.  Traders and traveling scholars moving between China and the Mediterranean may have also transmitted West some Chinese cosmological ideas.

Dunlop, D. M. 1952.  “The Dīwān Attributed to Ibn Bājjah (Avempace).” Bulletin of the School of Oriental and African Studies, University of London, Vol. 14,No. 3, Studies Presented to Vladimir Minorsky by His Colleagues and Friends, pp. 463-477.