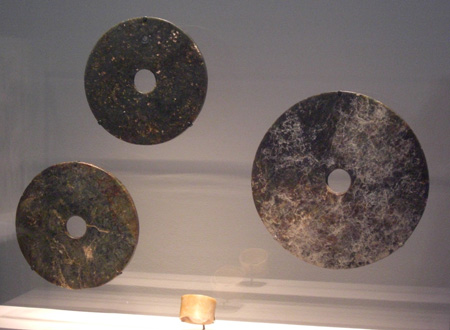 The square pertains to Earth, and the circle pertains to Heaven.  Heaven is a circle, and Earth is a square.[1]

This cosmography is known as gai tian.  Fragments of a Chinese poem written about 300 BGC detail it:

The square earth is a chariot;
The round heaven is its canopy.[2]

Gai tian cosmography seems to have deep historical roots in Chinese culture.  Persons living about 3300 to 2250 BGC in the region of present-day Shanghai (whose culture is known as Liangzhu culture) expended enormous effort to make jade disks (called bi) and circle-in-square jade objects (called cong).[3]  Abstraction and formal simplicity don’t typically characterize folk art, even highly cultured folk art.  Consider, for contrast, ancient Chinese bronzes such as those from the late Shang dynasty (1300 to 1050 BGC).  These objects are intricately designed and feature fantastic life forms.  They are emotionally and spiritually evocative. Their aesthetic is wholly unlike that of Liangzhu bi and cong.

Liangzhu bi and cong are plausibly related to gai tian cosmography. Bi and cong are typically found in materially rich (high status) burials, where they are placed on the body of the buried person.  Non-decorative markings found on some bi link them to ritual sacrifice and indicate an orientation to the center and circular motion like that associated with a circular heaven.[4]  Cong might be interpreted as providing a path to heaven (circle) through the earth (square).[5]  A Chinese text from about the second century BGC associates cong with earth and bi with heaven.[6]  The cosmic significance of the circle and square helps to explain the peculiar aesthetic of the Liangzhu bi and cong.

Describing the earth as square was an unusual and persisting aspect of Chinese culture. Seafaring cultures have frequent opportunities to watch objects gradually disappear over the horizon. After the 5th century BGC, Greek and subsequent European writers consistently described the earth as spherical. However, the flatness of the earth at large is an intuitive sense in everyday life.  The belief that the world is flat is plausible enough that many persons today still believe that medieval Europeans believed that the world is flat.[7]  Thinking of the earth as a flat disk makes it easy to imagine the boundary between the earth and a domed-shaped space above.  But the Chinese described the earth as not just flat, but also square.  That description continued to have an important place in Chinese scholars’ thinking at least until their engagement with Jesuit astronomers in the seventeenth century.[8]

A passage in Hebrew scripture places a circular heaven like a canopy above the earth.  Isaiah 40:22 declares:

It is he [God] who sits above the circle of the earth,
and its inhabitants are like grasshoppers;
who stretches out the heavens like a curtain,
and spreads them like a tent to live in;

A passage in the book of Job connects the shape of the heavens to a flat, circular luxury object.  In Job 37:18, Elihu asks Job, “Can you, like him [God], beat out [raqa] the skies, hard as a molten mirror?”[10] Mirrors were personal luxury items in the ancient world.  They were flat and usually roundish.  The word for beat out, raqa, is the root for the world firmament/dome in Genesis’s account of the creation of the world (“Let there be a dome in the midst of the waters….  God called the dome Sky”).[11]  Hence the mirror in this passage in Job relates to heaven like a Chinese bi does.

A square earth and a circular heaven, the curious elements of gai tian cosmography, can thus be found in scattered pieces in Hebrew and Christian scripture.  But such fragments do not only exist there.

In the fifth-century BGC Etruscan Tomb of the Monkey in Chiusi, Italy, sirens placed at four quarters of a square hold up a circle.  Sirens were associated with birds conveying souls to heaven and celestial representations on ceilings in early Greek and Etruscan art.  Moreover, the canopy was a common symbol of heaven.[12] Hence this fifth-century BGC tomb in Italy could be interpreted as representing gai-tian cosmography.

Perhaps these fragments of western Eurasian cosmography merely indicate general patterns of human imagination. They may have developed independently of eastern Eurasia gai-tian cosmography and been understood much differently.  But don’t dismiss too readily that considerable communication occurred across Eurasia thousands of years before the Internet.[13]  The wise men from the East who came to pay homage and give gifts to the child Jesus in Bethlehem may have been Chinese.[14] 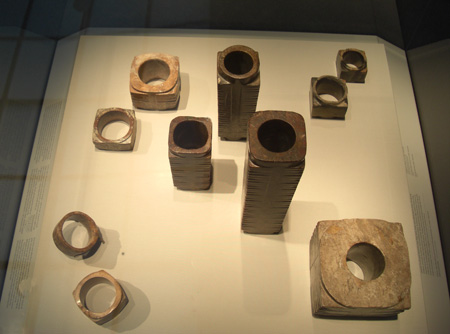 [3] The Freer Gallery has an outstanding exhibit of ancient Chinese jades, including many bi and cong from the Liangzhu culture.

Chinese thought on the form of the Earth remained almost unchanged from early times until the first contacts with modern science through the medium of Jesuit missionaries in the seventeenth century. While the heavens were variously described as being like an umbrella covering the Earth (the Kai Tian theory), or like a sphere surrounding it (the Hun Tian theory), or as being without substance while the heavenly bodies float freely (the Hsüan yeh theory), the Earth was at all times flat, although perhaps bulging up slightly.

At least one 13th-century Chinese scholar apparently challenged earlier the belief that the earth was square.  Mathematician Li Zhi argued that the earth must have rounded rather than square corners.

[9]  This and other biblical quotations, unless otherwise noted, are translations from the New Revised Standard Version.

[10] Translation from the Wikipedia entry for shamayim.

[11] The King James Version of the bible used the word “firmament” in the place of “dome.”  Wikipedia’s firmament entry describes the source of that translation:

The original Biblical Hebrew raqia, or raqiya` ( רקיע), is derived from the root word raqa ( רקיע) “to beat or spread out”, e.g., the process of making a dish by hammering thin a lump of metal. However, in Syriac this root word had adopted the meaning “to make firm or solid”, which led to the erroneous translation of raqia as “that which strengthens or supports” (i.e., Greek stereoma) in the Septuagint (circa 200BC). This was then carried forward from Greek into the Latin Vulgate translation (as firmamentum), and from Latin into English as firmament in the 13th century. The King James Bible later entrenched the use of the term firmament.

[13] Soper (1947) traces across Eurasia the influence of western Eurasian images of the dome of heaven. While id. emphasizes diffusion from west to east, the same communication channels could work in the reverse direction.  Cullen (1996), p. xiii, states, “ancient Chinese astronomical theory and practice appears to have had no significant connections with the worlds of Hellas, Babylon or Egypt.”  See above for apparent connections.

[14] Landau (2008) translates and analyzes an ancient Christian apocryphal writing called Revelation of the Magi.  In that text, the magi who journeyed to Jesus came from “the great East” (RevMagi 1:2), from a land called Shir:

These are kings, sons of Eastern kings,in the land of Shir, which is the outer part of the entire East of the world inhabited by human beings, at the Ocean, the great sea beyond the world, east of the land of Nod, that place in which dwelt Adam, head and chief of all the families of the world. (RevMagi 2:4)

Shir is mentioned in other ancient sources.  It seems to be connected with China and the silk trade.  See Landau (2008) pp.  261-2.  On the other hand, that Adam dwelt in China is clearly mythical.  The Armenian Smbat the Constable journeyed to the great Mongol court at Karakorum in the mid-thirteenth century.  In a letter in 1248 to King Henry I of Cyrprus, Smbat wrote that the magi (Three Kings) had come from Tanchat (Western Xia, present-day China) and that there are “many Christians scattered over the East, and many fine churches.” Although Smbat was correct about the presence of Christians in central Asia and China, most ancient commentators thought that the Magi came from Persia. In ancient western Eurasia, frankincense and myrrh were found in what is now Yemen, Oman, and Ethiopia.

Landau, Brent Christopher. 2008. The sages and the Star-Child: an introduction to the Revelation of the Magi, an ancient Christian apocryphon. Thesis (Ph.D.)–Harvard University, 2008.

11 thoughts on “earth’s a square, heaven a circle”