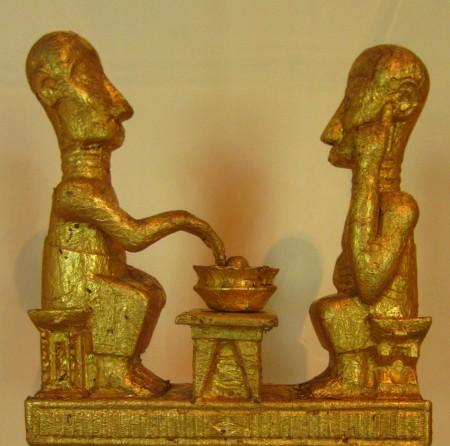 Many bureaucrats dread meeting with first-level management, to say nothing of meeting with second, third, fourth, fifth, and so on levels of higher management.  In actual meeting practice, any level of management means a person filling a position.  In other words, the boss is probably a human being.  And also a bureaucrat just like you.

In other bureaucratic issues this month, Mark Cuban, despite his appalling lack of bureaucratic credentials, provides an incisive analysis of facebook’s business:

Its a time waster. That’s not to say we don’t engage, we do. We click, share and comment because it’s mindless and easy. But for some reason FB {facebook} doesn’t seem to want to accept that it’s best purpose in life is as a huge time suck platform that we use to keep up with friends, interests and stuff. I think that they are over thinking what their network is all about.

In other words, wasting time creates billions of dollars in business value, over-thinking is a major strategic danger, and facebook shouldn’t try to change what it does.  These lessons are not just for facebook’s business planning department.  They are for everyone.

Neal Stephenson at the World Policy Institute offers some encouraging news about the slowing of innovation.  He observes:

Most people who work in corporations or academia have witnessed something like the following: A number of engineers are sitting together in a room, bouncing ideas off each other. Out of the discussion emerges a new concept that seems promising. Then some laptop-wielding person in the corner, having performed a quick Google search, announces that this “new” idea is, in fact, an old one—or at least vaguely similar—and has already been tried. Either it failed, or it succeeded. If it failed, then no manager who wants to keep his or her job will approve spending money trying to revive it. If it succeeded, then it’s patented and entry to the market is presumed to be unattainable, since the first people who thought of it will have “first-mover advantage” and will have created “barriers to entry.” The number of seemingly promising ideas that have been crushed in this way must number in the millions.

In the era before Google (BG), “Been Tried Before” (BTB) could be used to help stop new ideas, but often BTB was not considered credible. For example, in 74 BG the company C-T-R changed its name to IBM. C-T-R had a distinguished bureaucratic record that included developing a time clock that recorded a worker’s arrival and departure time on a paper tape.  IBM in the BG era went on to develop personal computers that have tended to devalue bureaucratic hierarchies. In the era after Google (AG), IBM bureaucrats can much more effectively assert BTB to stop products like the PC.

Judy Sims reports that newspaper executives aren’t supporting innovation.  That’s probably because they have heard the news that innovation is slowing. You can see an example of this slowing of innovation at the Bangor Daily News (Maine), where two anchors made a weighty on-air resignation (“Take this job and shove it: Fed-up Bangor TV anchors quit on air”) before they had a chance to sit in the new anchor stage set designed for the news station.

One thought on “COB-77: meeting with management”