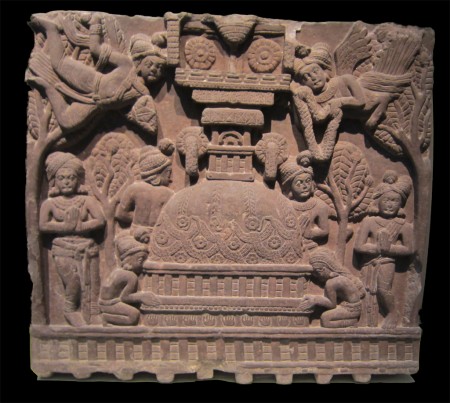 Apsara that appear in Indian Buddhist sculpture from about 2200 years ago are similar to iconography found across Eurasia for millennia.  The image above shows two Buddhist devotees (in time-series representations) circumambulating and venerating a domed reliquary.  Two apsara symmetrically hover above, embracing a holy object.  The sculpture is from the Bharhut stupa from Madhya Pradesh, India, early in the second century BGC.

Flying gods symmetrically supporting or embracing objects also existed in Graeco-Roman sculpture.  For example, sets of winged figures support wreaths and figurative spaces are on an undated Roman sarcophagus in the Museo Pio-Clementino of the Vatican Museums. 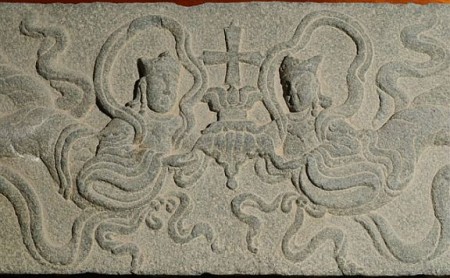 Similar iconography existed across Eurasia from no later than the fourth century. Christian sarcophagi from fourth and fifth century Constantinople (Istanbul) depict flying angels symmetrically supporting a chi-rho within a wreath.  The Luoyang Jingjiao pillar dated 829 shows similar Christian iconography in central China.  So too do fourteenth-century Christian tombstones from Zayton (Quanzhou) on the southeastern coast of China.  From the fourth to the fourteenth centuries similar iconography existed in the Caucasus, Afghanistan, Central Asia, and China in places such as Hadda, Kizil, Kucha, and Dunhuang.[*]

Distinguishing communication of iconography from independent common patterns of human imagination — symmetry, celestial honor, and celestial harmony — is difficult.  Tracing iconographic pedigree faces huge problems of selective survival of artifacts.  But look at the three images.  This much is clear: the peoples of Eurasia a millennia ago had commonalities at high levels of culture.

Images:  The first image above is my photograph (with background blackening) of “One face of a fence-rail from Bharhut: Worship at a Stupa” (F1932.26) on display at the Freer Gallery in Washington, DC.  To make this image more accessible to others, I’ve uploaded it to Wikimedia Commons and made it available with a permissive CC-AT license.  The second photo above is a detail from a photo of a Roman sarcophagus in the Museo Pio-Clementino of the Vatican Museums.  The source photo Jean-Paul Grandmont generously contributed to Wikimedia Commons.  The third photo is used, with permission, from Sam Lieu and Ken Parry’s Macquarie University webpage, Manichaean and (Nestorian) Christian Remains in Zayton (Quanzhou, South China)  See Fig. 28 Relief of angels with cross on a lotus flower symbol (B31, photo M. Wilson 2004).  That page  includes photos of similar iconography on other tombstones at Zayton.  See also Zhu Yanke’s tombstone from fourteenth-century Zayton.  Andrew West of Babelstone, who has analyzed Christian tombstones at Zayton, generously contributed it to Wikimedia Commons.

Note [*]: For discussion and references, see Parry, Ken. 2012. “11. The Art of the Christian Remains at Quanzhou.” In Lieu, Samuel N.C. 2012. Medieval Christian and Manichaean remains from Quanzhou (Zayton). Turnhout: Brepols.