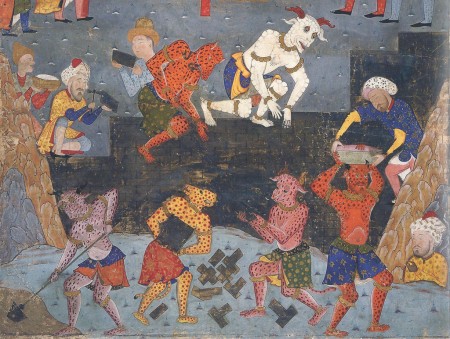 The Book of Ezekiel describes Gog like a Mongol leader.  Early Jewish and Christian references to Gog and Magog variously refer to them as individuals, peoples, and lands.  In the Book of Ezekiel, Gog is from Magog.  Prophesying about 2600 years ago, Ezekiel declared that Gog from Magog will come with many peoples, “out of the remotest parts of the north, … all of them riding on horses, a great horde, a mighty army.”  Gog from Magog attacks quiet peoples living in unwalled “waste places” and carries off plunder.  Those people seem like migrants to the great expanses of Eurasia.  Ezekiel prophesies that Gog from Magog will attack the people of Israel.  The people of Israel have walled and gated cities.  However, the decisive defense of Israel in Ezekiel’s prophecy comes from God showing his power to the world.[1]

No later than 630, the stories of Gog and Magog and Alexander’s wall came together among Syrian Christians in northern Mesopotamia.  Legends about Alexander the Great probably became popular soon after his death in 323 BGC.  An Alexander Romance written in Greek is known to have existed from no later than the third century GC.[3]  A Syrian Christian author in 630 wrote a text that described itself thus:

An exploit of Alexander the son of Philip the Macedonian, how he went forth to the ends of the world, and made a gate of iron, and shut it in the face of the North wind, that the Huns {variously also called the Scythians} might not come forth to spoil the countries [4]

This text identified the Huns as Gog and Magog.  A Syriac poem written about this time described itself as “Poem on the pious king Alexander and on the gate which he built against Gog and Magog.”[5]  The Islamic conquest of Syria in the mid-seventh century provided additional impetus to Syrian Christian apocalyptic writing.  The Syrian Apocalypse of Pseudo-Methodius, probably composed in the last decade of the seventh century, describes Alexander constructing a wall against Gog and Magog.  The Apocalypse of Pseudo-Methodius circulated widely and was well-known across western Eurasia from the eight century.  It popularized the story of Alexander the Great walling off Gog and Magog.[6]

By the mid-ninth century, learned men believed that Alexander’s wall against Gog and Magog was in northwestern China.  The influential early-ninth-century Persian astronomer, geographer, and mathematician al-Khwārizmī placed Alexander’s wall in northwestern China.[7]  In 842, Caliph al-Wathiq sent Sallām at-Turjumānī, who was highly proficient in languages, on a mission to determine whether Gog and Magog had broken through Alexander’s wall.  Sallām traveled to Tiflis (Tbilisi) in the Georgian Caucasus and plausibly passed through the Darial Pass.  Some accounts of Alexander’s feats suggested that he had walled off the Darial Pass.  Evidently what Sallām saw in the Caucasus was not compelling.  He headed east, traveling 3200 miles to northwestern China.  Sallām ultimately reported to Caliph al-Wathiq that he found Alexander’s wall in China about 300 miles from Igu (present-day Hami), probably at Yumenguan.  Assuaging the Caliph’s anxiety, Sallām declared that this wall against Gog and Magog was intact.[8]  That comforting report probably depended on identifying Alexander’s wall with what has become known as the Great Wall of China.  Eastern Christian stories of Alexander’s wall indicated that the wall was in the Caucasus.[9]  But a location in China had supporters in the Islamic world.[10]  That location also had the advantage of corresponding to the location of an actual, enduring, great wall.

Possible effects of communication are boundless.  The circulation of claims and stories about Gog and Magog, Alexander building a wall, and a great wall in China coalesced in an official report to Abbasid Caliph al-Wathiq, one of the most powerful and learned ninth-century leaders on earth.  The report, and similar accounts of Alexander’s wall in China, annihilated the 3200-mile-wide space from the Caucasus to northwestern China.  The most amazing communication technology has always been human minds and human networks.

[image] Bottom half of image, Alexander Builds a Wall against Gog and Magog; from the dispersed Falnama, Iran, Safavid period, mid-1550s to early 1560s.  Held in the Chester Beatty Library, Dublin, MS 395.  The Qur’an describes a story of Dhū’l-Qarnayn’s wall against Gog and Magog. Dhū’l-Qarnayn (the two-horned one) probably represents Alexander the Great. Dhū’l-Qarnayn met an uncivilized people (people who could scarcely understand his words; Qur’an 18:93) who offered to pay him tribute for building a protective wall.  Dhū’l-Qarnayn refused to accept tribute, but asked the people to help in constructing the wall (Qur’an 18:95).  The creatures working on the wall in the above painting may indicate those uncivilized people. The depiction of two of them as dog-headed seems to reflect descriptions of persons associated with Gog and Magog in the Alexander stories.  See Doufikar-Aerts (2011) pp. 44-46.  The creatures carrying cauldrons is consistent with a reference to molten metal in Qur’an 18:96. The creature on top of the wall has two horns. That depiction creates an additional dimension in the relationship between Dhū’l-Qarnayn and Alexander the Great.

[2] Josephus, War of the Jews, Bk. 7, Ch. 7, Sec. 4.  Alexander the Great did not attack Jerusalem and is well-regarded in ancient Jewish literature.

[3] Stoneman (1991) is a recent English translation of texts associated with the Greek Alexander Romance.

[6] Id. p. 26 describes the Syrian Apocalypse of Pseudo-Methodius.  An account of Alexander walling off unclean nations exists in the γ recension of the Greek Alexander Romance.  The account specifies 22 nations and names 16 nations, led off by “Goth, Magoth, ….”  These were “unclean nations” in the sense of ritual purity and practices considered savage, evil, and disgusting:

They used to eat worms and foul things that were not real food at all — dogs, flies, snakes, aborted foetuses, dead bodies and unformed human embryos; and they ate not only animals but the corpses of humans as well.

[8] Donzel, Schmidt & Ott (2009) Ch. 7, 10-12.  Id. provides an English translation of the text from Ibn Khurradadhbih, and compares other sources. Id. argues with detailed analysis that Sallam actually took the trip from Samarra to western China.  Id., p. 233, gives routes and mileages.  Sallam reportedly traveled from 842-845.  Ducène (2012) maintains that the trip was fictive.  Even if it was fictive, it seems to have been believable.

[9] Eastern Christian sources located Alexander’s Wall at the Caucasian Gates, the Caspian Gates, the Derbent Pass (in present-day Daghestan), and the Darial Pass (on the border of present-day Russian and Georgia).  In these sources, the story includes Alexander praying for two mountains to move together to close off the unclean nations.  Thus the most consistent location in the Eastern Christian sources is the Darial Pass. Islamic tradition located Alexander’s wall similarly.  Donzel, Schmidt & Ott (2009) pp. 51-6, 81.  In Arabic literature Gog and Magog are called Yājūj and Mājūj.

Doufikar-Aerts, Faustina.  2011.  “Dogfaces, Snake-tongues, and the Wall against Gog and Magog.” Pp. 37-52 in Asghar A. Seyed-Gohrab, Faustina Doufikar-Aerts and Sen McGlinn (eds.). Embodiments of Evil: Gog and Magog. Interdisciplinary Studies of the ‘Other’ in Literature & Internet Texts. Leiden University Press (apparently a re-issue of Gog and Magog: the clans of chaos in world literature (2007)).