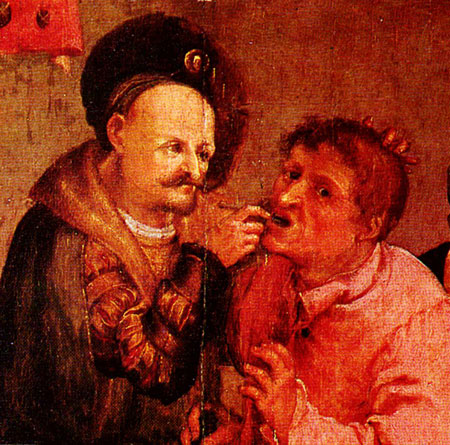 In my leisurely reading of back issues of the Journal of Dental History, I’ve discovered that the history of bad breath has been sadly neglected.  The history of bad breath is fascinating and of considerable world-historical importance.  In Ferdowsi’s Shahnameh, a Persian epic that is among the greatest works of world literature, bad breath plays a decisive role in placing Alexander the Great at the head of a Greek army.  Alexander’s Greek army conquered and reshaped the ancient world from North Africa to Afghanistan.

The Shahnameh’s story begins with King Darab invading Greece and defeating King Filqus about 2400 years ago.  Darab was the King of Persia.  Filqus (Philip II of Macedon) was the King of Macedon.  Darab’s staff urged him to take as booty Filqus’s daughter Nahid (Olympias):

{She is} elegant as a cypress tree, her face as fresh as springtime.  No one has ever seen any idol in China as lovely as she is, she outshines all others in her beauty.  If the king sees her, she will please him: this cypress would be well placed in his garden. [1]

Filqus gladly complied and sent Nahid to Darab in a way befitting a princess:

There were ten camels carrying Greek brocade embroidered with jewels and gold, together with three hundred camel loads of carpets and necessities for the journey.  The princess remained in her {golden} litter, guided by a bishop and a monk.  Behind her came sixty maidservants, each of them adorned with a diadem and earrings and carrying a golden goblet filled with jewels.

Darab joyfully received Nahid, placed a crown on her head, and began living with her in his royal palace at the Persian capital in Pars.

Darab and Nahid did not live happily ever after.  The problem was bad breath:

One night this lovely moon, arrayed in jewels and scents, lay sleeping beside the king.  Suddenly she sighed deeply, and the king turned his head away, offended by the smell of her breath.  This bad odor sickened him, and he frowned, wondering what could be done about it.

The origin of medicine has long been a subject of rhetorical dispute.  At a practical level, physicians were closely associated with rulers in the ancient world. Darab, like most ancient rulers, had ready access to the most respected physicians of his time:

He sent knowledgeable doctors to her; one who was especially expert was able to find a remedy.  There is a herb that burns the palate, which they call “Sekandar” in Greece, and he rubbed this against the roof of her mouth.  She wept a few tears and her face turned as red as brocade, because it burned her mouth, but the ugly smell was gone.

But although this beautiful woman’s breath was now as sweet as musk, the king no longer felt any love for her.  His heart had grown cold toward his bride, and he sent her back to Filqus.  The princess grieved, because she was pregnant, but she told no one of this.

The importance of Nahid’s bad breath is consistent with ancient concern about bad breath.  The biblical book of Genesis reports that traders traveling from Gilead to Egypt led camels carrying labdanum, a resin used for breath-freshening in the ancient world.[2]  Within the Hippocratic Corpus, a treatise On the Diseases of Women includes prescriptions for mouthwash to eliminate bad breath.[3]  Rufus of Ephesus, a leading medical scholar of the first century, wrote a treatise On Foul Breath.[4]  Pliny the Elder’s Natural History, also from the first century, advises, “it is a good plan to rinse the mouth with undiluted wine, before going to sleep, for the purpose of sweetening the breath.”[5]  Nearly a century earlier, Ovid advised women “never to neglect to keep your teeth white and to rinse your mouth out every morning with clean water.”[6]

She had complained also of foul breath, about which she was informed by one of her intimates, adding that this was worse than death for her.  My father made her fast until evening, then forcibly fed her a macerated salt fish and had her drink the sediment of wine made of inferior dates.  She felt sick and vomited. He repeated this treatment for three days and then told her: ‘Exhale in the face of whoever had informed you of it, and ask this person if indeed it has gone.’ [7]

In the mid-eighth-century, Isā ibn Mūsā, a leading court figure within the first two Abbasid caliphates, reportedly used bad breath as a rhetorical ploy to cover up his erectile difficulty.  After enjoying many women,  Isā ibn Mūsā retired to a life of abstinence.  His abstemious life was interrupted by the sight of a slave girl “enchanting, with a firm and shapely body as white as palm core and gleaming like a silver bough.”[8]  Positioned to fulfill his newly recovered desire, Isā ibn Mūsā went limp.  To avoid embarrassment, he turned on the girl and accused her of bad breath.  He said to her:

You come on to me but you’ve got bad breath, you won’t relax your thighs, you’re unresponsive and you won’t even help yourself. …  If you were a Persian princess, your master would consider you the perfect mate, since all the men there like doing it with women with bad breath! [9]

The Shahnameh, which Ferdowsi wrote between 980 and 1010, celebrates the Persian greatness of pre-Islamic Iran.  Within the early Islamic world, tension existed between Persians and Arabs.  The claim that Persian men like to have sex with women who have bad breath is a national insult.  Ferdowsi, in the Shahnameh’s story of Darab’s rejection of Nahid, showed the fine sensibility of a Persian man, at least with respect to bad breath.

[2] Genesis 37:25.  Other translations of the relevant Hebrew word are resin and myrrh.  Here’s more on labdanum.

[3] Bk 2.  Guerini (1909), pp. 50-1, translates the relevant text.  On the Disease of Women reports that one of the mouthwashes is “known under the name of Indian medicament.”  Al-Jahiz, an Islamic scholar in Baghdad early in the ninth century, reported that Indians use toothpicks and toothbrushes.  Al-Jahiz, Kitab fakhr al-sudan ‘ala al-bidan, trans Colville (2002) p. 49 (The Superiority of Blacks to Whites).  Here’s relevant background on views of India from the ancient Islamic world.

[9] Id.  Arab physician Nafi al-Harith ibn Kalada of Thaqif advised the Persian King Khosrau I to avoid sex with an old woman: “Her water is deadly poison and her breath speedy death.”  Al-Harith counseled having sex with a young woman: “her mouth is cool, her saliva sweet and her breath fragrant.” HP p. 212.

Guerini, Vincenzo. 1909. A History of dentistry from the most ancient times until the end of the eigthteenth century. Philadelphia: Lea & Febiger.