A fictitious dialogue between the Arab physician Nafi al-Harith ibn Kalada of Thaqif, who died in 670, and the famous Persian King Khosrau I, who reigned from 531 to 579, seems intended to elevate the status of Bedouin Arabs in the eyes of Persian elites.  The Sassanid Empire under King Khosrau I represented an ancient and highly cultured Persian civilization.  Khosrau I was known in Persian as Anushirwan, which means “immortal soul.”  United under Islam, Bedouin Arabs conquered Persia in the middle of the seventh century.  Al-Harith became chief physician and professor at the Academy of Gundishapur in Persia.  Al-Harith was thus a Bedouin Arab working within the elite cultural sphere in seventh-century Persia.

Right at its beginning, the dialogue highlights status tension between al-Harith and Anushirwan.  The account begins:

On arriving at the court of the Persian King Anushirwan, {al-Harith} was admitted to his presence and, standing erect before the King, was asked by him:

I am al-Harith ibn Kalada of Thaqif.

What is your profession?

Are you a Bedouin Arab?

Yes, I am, and of purest Arab stock, from a tribe that lives in the heart of Arabia.

What need do the ignorant, stupid, ill-fed Arabs have of a physician?

O King, if this description of them is correct, they are all the more in need of someone to remedy their ignorance, compensate their deficiencies and teach them the proper diet.  A person with a well-developed mind knows what to do himself; he discerns what is wrong with himself and preserves his health by taking good care of himself.

The “standing erect before the King” invokes a contrast with bodily postures of status deference, e.g. bowing.  In the dialogue, the King tests al-Harith’s wisdom.  The dialogue makes clear the King’s contempt for Bedouin Arabs and al-Harith’s intellectual superiority over the King.

Al-Harith’s verbal domination of the King does not occur merely through reason.  Al-Harith’s description of a woman’s beauty captivates the King.  Among the King’s questions to al-Harith:

What kind of woman draws the heart most and is most pleasant to behold?

She is — if you can find such a one — a woman of tall and imposing stature, with a broad forehead, a retroussé nose, black eyes, red lips, pale soft cheeks, a generous torso, a graceful neck, eyebrows grown together, swelling breasts, a narrow waist and dainty feet, white skin, thick, curly hair and a fresh and mild complexion, one whom you would fancy, in the dark, to be the shining moon; when laughing, she shows teeth white as camomile and a mouth red as purple; she is like an egg lovingly protected in the nest, softer than fresh butter, sweeter than honey, more exquisite than Paradise and Eternal Life.  Her fragrance is more delightful than that of jasmine and roses; you will enjoy her company and delight to be alone with her.

These words cause the King to laugh so heartily that his shoulders twitched. But he went on to ask:

What is the best time for sexual intercourse?

The latter part of the night, when the belly is emptier, the breath more even, the heart more eager and the womb warmer.  If you choose to enjoy her in the daytime, your eye will feast upon the beauty of her face, your mouth will gather the fruits of her grace, your ear will capture her pleasant strains, and all your limbs will feel relaxed through her presence.

How wonderful a Bedouin you are!  You have been favored with knowledge and endowed with intelligence and understanding.

The King then presented al-Harith with fine gifts and ordered his words to be put down in writing.

A woman’s beauty, even just represented in words, can trump the achievements of an ancient civilization and a king’s rule. 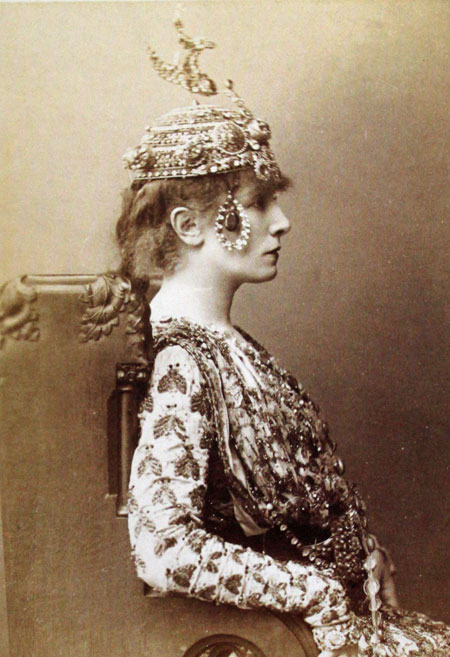 The dialogue account is from HP, p. 212.  Al-Harith initially wins the King’s favor with elegant, formulaic praise of Bedouin Arabs.  The King then interrogates al-Harith with a lengthy set of medical questions.  The questions and responses about women and sex, presented in the context of medical questions, conclude the dialogue.  Ibn Abi Usaibia reports this dialogue from ibn Juljul.  However, ibn Abi Usaibia also reports that al-Harith wrote a “Dialogue on Medical Matters” between himself and King Anushirwan.  HP, p. 215.  Certain medical opinions of Tayādūq (also known as Baradiq) seem to have been influenced by al-Harith’s dialogue, as reported in HP.  See the sexual allure of old women, note [1].  Tayādūq died in 708.  Hence the dialogue reported in HP probably is ultimately from al-Harith.

A beautiful women’s face being like the shining moon and her teeth being lustrous white in an enduring image of female beauty.  For example, a leading physician in twelfth-century Damascus, Rashīd al-Dīn Abū Hulaiqa, wrote this love poem:

O my two companions, I find no sleep
Because I am in love; my heart is captured and chained
By love for a girl whose face outshines the full moon,
Especially through its contrast with her black hair.
I am confused by her, who equals the new moon in beauty,
How strange it is that the moon should lead astray instead of guiding!
She has teeth like a string of pearls,
And her speech is like pearls when scattered.

2 thoughts on “controlling words about a woman's attractiveness”