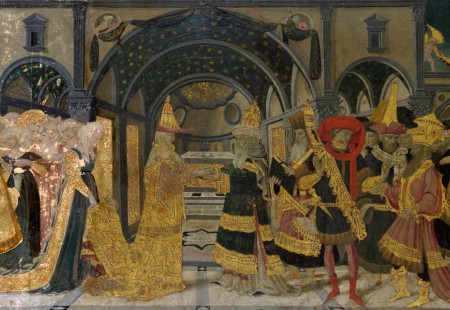 While the Queen of Sheba’s hard questions don’t appear in the biblical account of her visit to King Solomon, ancient rabbinic literature told of specific riddles and challenges. The Midrash Mishle (Midrash on Proverbs), probably written sometime from the eight century to the first half of the eleventh century, records two riddles and two challenges:

Other additional riddles concern specific knowledge of Hebrew scripture. Rabbis might pose such riddles to each other. They don’t indicate contrasting authority in ruling and knowing.

Early thirteen-century Armenian translations of the twelfth-century Chronicle of Syrian Patriarch Michael the Great includes riddles of a rather different sort. The context is the visit of Queen Nessa to King Solomon:

To {King Solomon} came Nessa, the queen of a southern realm, {who was} said to be descended from the line of Noah’s daughter, Aster. {She came} from a place in the south where, to this day, women descended from the patriarch Noah rule. {Solomon}’s reputation for wisdom attracted her and she tested him with enigmatic questions, some of which we have provided here. [4]

Queen Nessa seems to be variant name for the Queen of Sheba.[5] The first three riddles of Queen Nessa have similar themes to the first two additional riddles in the Midrash ha-hefez. But then come two much different riddles:

The reasoning in the first question above, applied to the second question. would make the Indian man potent: he is hot and dry, consistent with the hot and dry country of India. The answers to these riddles are themselves a riddle.

The riddle of Indians’ procreative difficulties seems to be political. The qualitative scheme of cold/hot and wet/dry was used in ancient Greek medicine. Under Caliph Harun al-Rashid in Baghdad late in the eighth century, Yahya ibn Khalid of the Indian Barmakid family became vizier. Yahya had Indian medical works translated into Arabic. One of the translated Indian works was “a book on topics on which India and Rome have differed concerning the hot and the cold.”[7] Proponents of Indian medical knowledge and proponents of Greek medical knowledge competed aggressively within al-Rashid’s court. Syriac Patriarch Michael the Great’s sources are much more likely to be aligned with Greek knowledge than with Indian knowledge. Other of Queen Nessa’s riddles emphasize monotheism and hostility to foreign gods. The two riddles on Indians probably ridiculed ancient Indian medical reasoning about hot and cold. The most obvious evidence for that slant is that both riddles present impotent Indians.

The Queen of Sheba’s encounter with King Solomon wasn’t just a story. Like Marcolf’s encounter with Solomon, the story participates in disputes about knowledge. Story-telling was an aspect of knowledge competition.

When there are prophets among you,
I the Lord make myself
known to them in visions;
I speak to them in dreams.
Not so with my servant Moses;
he is entrusted with all my house.
With him I speak face to face —
clearly, not in riddles ;
and he beholds the form of the Lord.

[3] Midrash ha-Hefez, trans. id. pp. 163-5. Schechter (1890), which transliterates the text as Midrash Hachephez, provides the Hebrew text and a similar English translation (with the answers). The riddles probably came from written rabbinic sources from long before 1430. Ahmad ibn Muhammad al-Tha’labi, an eleventh-century Islamic scholar, recorded in his work Lives of the Prophets that the Queen of Sheba (Bilqis) presented this riddle to Solomon: “I wish to ask you about {drinking} water which is neither in the ground nor in the skies.” Solomon’s sensational answer, “the sweat of horses.” The Queen of Sheba pronounced that answer correct. Trans. Lassner (1993) p. 200.

[4] Chronicle of Michael the Great, Armenian version, trans. Bedrosian (2013) p. 28. Neither this text nor the riddles are in the sole surviving Syriac manuscript of Michael’s Chronicle.

[5] The surviving Syriac manuscript of the Chronicle includes information about the kingdom of Saba (Sheba):

a certain Egyptian named Sanos waged war against the Cushites. He was surnamed Athanophos that is, the Cushite. He became the third leader and ruled for 60 years. He allied himself to the Libyans, waged war against Saba, and killed him. His daughter, called Saba after her father’s name, succeeded him. She ruled for 40 years. Aristocholos mentioned that she engaged in many wars and triumphed. Therefore, women became accustomed to rule and lead armies into war there.

From Syriac trans Moosa (2014) p. 41. The Armenian version doesn’t include that history. It seems meant to explain the existence of the Queen of Sheba. The pre-Islamic Arabic texts Kitab al-Magall and the Cave of Treasures similarly note a dynasty of women rulers in Saba. In the Syriac version of the Cave of Treasures, see Budge (1927) p. 136 (the fourth thousand years).

[7] HP p. 601, from Ibn Abi Usaybi’ah entry for Sanjahal, who was “among the finest Indian medical experts and astrologers.” HP p. 600. Al-Razi drew upon this work. Another Indian medical work translated into Arabic was “a book on the treatment of pregnant women in India.” Id.

Budge, E.A. Wallis, trans. 1927. The Book of the Cave of Treasures. London: The Religous Tract Society.

Bedrosian, Robert. 2013. The Chronicle of Michael the Great, Patriarch of the Syrians. Long Branch, NJ: Sources of the Armenian Tradition, online at rbedrosian.com

Lassner, Jacob. 1993. Demonizing the Queen of Sheba: boundaries of gender and culture in postbiblical Judaism and medieval Islam. Chicago: University of Chicago Press.