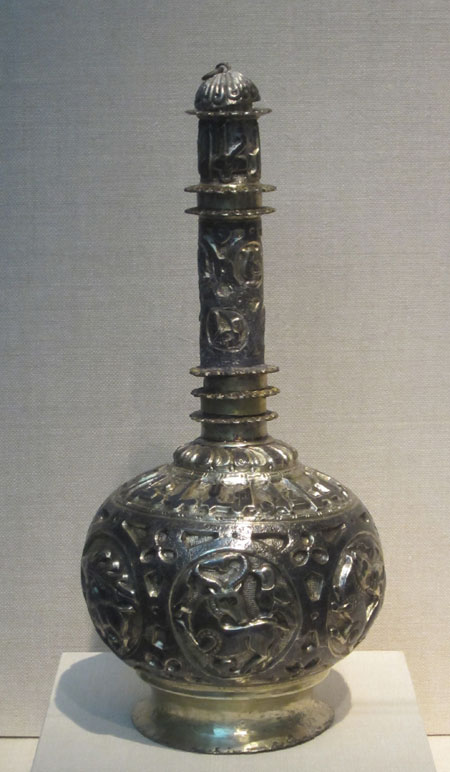 In the Indian-Persian-Arabic-Greek-Egyptian tales of The Thousand and One Nights, rosewater is a luxurious perfume that revives the limp and is associated with love.  Here’s an example of rosewater described in the context of luxurious objects:

they brought him {the caliph} liqueur flavoured with fruit, and sweet spices in goblets of gold, silver and crystal.  Two pages, lovely as moons, wearing gold-embroidered Alexandrian robes, brought this in, carrying in front of them trays with crystal jugs of rosewater scented with musk. [1]

Lines of beautiful singing girls subsequently entertain the caliph.  In another example, the merchant ‘Ali Shar is brought before his beloved slave girl, Zumurrud, who is disguised as a king:

{‘Ali Shar said,} “I am here to look for a slave girl whom I have lost.  She was dearer to me than my hearing and my sight, and, although I have lost her, she still holds my soul.  This is my story.”  He then wept until he fainted.  Zumurrud ordered rosewater to be sprinkled on his face and this was done until he had recovered his senses. [2]

That night ‘Ali Shar had passionate sex with Zumurrud.  Rosewater also appears in the story of Zain, a woman so beautiful that men who see her fall deathly in love with her.  Zain served her lover Masrur in her home when her husband was thought to be away:

Zain took a wine cup and brought it to Masrur, having flavoured it with rosewater and crushed musk.  He got up and went to meet her, saying: “By God, your saliva is sweeter than this.”  She started pouring wine for him and he poured it for her, after which she sprinkled him from top to toe with rosewater until the whole room was perfumed.  Her husband, {secretly} watching all this, was astonished by the strength of their mutual affection, and the sight filled him with furious anger and passionate jealousy. [3]

Rosewater appears in many other similar contexts in the tales of The Thousand and One Nights.

Roses have long been highly valued in Eurasia.  Roses were widely cultivated in China no later than 1600 years ago.  In early ninth-century Baghdad, a physician to the caliph al-Māʾmūn reportedly did not use any medicinal treatments that had not been established for at least two hundred years:

He did not use Oxymel and preserved rose unless it was preserved in honey.  Nor did he use rose water unless it was extracted from a rose which had been boiled in hot water, but never made with sugar.  On the whole he did not use anything which the ancients did not know. [4]

One night, when {one of the Sultan’s wives} was well again and the Sultan was sleeping with her, as the night was ending, she pretended to be frightened, clutched at her heart and kept shivering and crying. The Sultan, who loved her dearly, noticed it and said: “What is the matter with you?” But she did not reply. He then ordered some apple juice to be brought and had her drink some, sprinkled her face with rose water and said: “Will you not tell me what has happened to you, why you are so upset?” [5]

An ornate silver rosewater bottle has survived from the early twelfth-century Islamic world.  It is inscribed in Arabic with a generic blessing:

The rosewater bottle offers these blessings with a form evoking male sexual vitality.

The physician admitted the Caliph to a large square room, whose ceiling was all covered with openings to give light. It was hung entirely with brocaded cloth, which showed under it gum-wood dyed with rose water, sandal and camphor wood. When the Caliph lay down to sleep, he suddenly smelled the most exquisite odors; he could not understand what they were, for he did not see in that room any perfumes, fruits or flowers, neither did he find any fragrant herbs behind the cloth nor any place where they could be put. He was greatly astonished and ordered al-Fath ibn Khāqān to trace the source of these smells. Al-Fath went searching and found around the room, from the outside and all its sides and corners, fine chinks filled with sweet-smelling herbs, crammed with all kinds of aromatic plants, fruits, perfumes and scents; among these were mandrake, the skins of watermelons filled with wild thyme, sweet basil from Yemen, prepared with rose water, yellow saffron perfume, camphor, old wine, saffron and curcuma.

[5] HP p. 905.  The sultan was Ayyubid al-Adil.  Ibn Abi Usaybi’ah heard the story from his father, who was a physician in the sultan’s court.

[6] Translation from the label for the rosewater bottle, on display in the Freer Gallery.