A doctor walking along the sea shore sees a coffin floating in the waves.  The doctor orders his servants to retrieve the coffin and take it to his house.  There, the doctor opens the coffin and finds “a very beautiful girl adorned with royal ornaments and lying in a state of apparent death.”  Inside the coffin is also twenty thousand gold coins.  An accompanying note awards half of those coins to the finder and asks that the other half be spent on a funeral for the girl.  The doctor, swearing to spend more than half the money on a funeral, orders his servants to construct immediately a pyre.

But while the pyre was being carefully and expertly constructed and assembled, a medical student of youthful appearance but mature judgment arrived.  When he saw the corpse of the beautiful girl being placed on the pyre, he looked at his teacher and said, “What is the cause of this recent death?”  The teacher said: “Your arrival is timely; the situation requires your presence.  Take a jar of unguent and pour it over the body of the girl to satisfy the last rites.”[1]

The above fragment is part of a text known as The Story of Apollonius King of Tyre.  The Apollonius text was highly popular in Europe during the Middle Ages.[2]  It has been, however, generically troublesome for modern critics.  The Apollonius text seems formally between New Comedy of post-Alexandrian Macedonian-ruled Greece, and Greek novels thought to have been most prevalent in the Roman Empire about the second and third centuries.[3]  Scholars have surmised that The Story of Apollonius King of Tyre is a summary of an earlier, more coherent narrative.[4]  Substantial seams like the one above are thus understood as artifacts of the summary text. 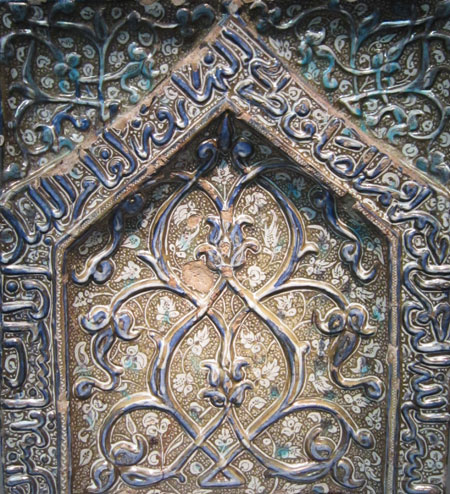 Seams in The Story of Apollonius King of Tyre are better understood as a fundamental characteristic of the text.  Agon amidst the chaotic actions of humans and Gods; story journey, most paradigmatically from slavery in Egypt to freedom in covenant with God in the promised land; and wonder at  the marvels of God’s creation are three artistic keys with great imaginative force in Greek, Judeo-Christian, and Islamic art, respectively.  The third key is associated with intricately patterned art.

The text known in Europe as the Arabian Nights exemplifies the third key.  Its unifying frame narrative is relatively uninteresting.  Its art is in wonderful patterns of events recounted and juxtaposed within the text.[5]  While the Apollonius text and the Arabian Nights probably had their main origins in much different times, places, and genres, they both developed through literary processes and literary cultures that had much in common.[6]  The third key helps to open greater artistic appreciation of a text misunderstood as only a story, The Story of Apollonius King of Tyre.

Please, doctor, do not touch me in any way other than it is proper to touch the wife of a king and the daughter of a king.

Contemporary critics in high academic chairs will recognize that rape has occurred. They will denounce the medical student’s actions and insist that he be ran out of the story and locked up.  Men who don’t get it will wonder why the girl isn’t grateful.  The teacher, an instructional businessman lacking a modern education, praises the medical student’s expertise.  Disposing of the medical student like an extraordinarily well-paid common prostitute, the teacher pays him ten thousand gold coins.  The medical student then disappears from the story.[9]

The ending part of the sexual-healing account sounds additional notes on the Apollonius text’s themes of fidelity and licentiousness.  After the medical student is paid for his services and disappears, the teacher-doctor takes over treatment of the beautiful girl.  The doctor prescribes for her a nourishing diet and a regime of warm compresses.  A regime of warm compresses echoes the medical student’s erotic treatment.  In contrast, the medical student apparently didn’t tell the doctor of the beautiful girl’s royal stature.  After a few days, the doctor learns of the girl’s royal descent.  He then decides to adopt her as a daughter.  That choice seems only to highlight carnal interests mixed with familial relations, a motif that plays repeatedly in the text.  However, echoing virtuous regulation of sexuality across the text, the ideal of virginity prevails:

When she {the beautiful girl} tearfully pleaded that she not be touched by any man, he {the teacher-doctor} granted her wish and placed her within the cloistered confines of the priestesses of the goddess Diana, where all the virgins were able to preserve their chastity.

The girl already had a daughter with Apollonius.  Being touched by the medical-student man apparently shouldn’t be counted since she was then dead.  In the temple of Diana, the girl gains recognition as the most beautiful and most chaste virgin.  She becomes a figure like the Christian sense of the Virgin Mary, but in the temple of Diana.[10]

I have found The Story of Apollonius King of Tyre difficult to translate, the major problem being the abrupt stylistic changes, the wild fluctuations from simple, almost primitive narrative to stylized and elaborate forms of expression.  It has been hard to resist the temptation to correct deficiencies such as repetition, parataxis, and the failure to subordinate one idea or event to another, or even to differentiate between distinct periods of time. [12]

Limiting appreciation of the Apollonius text to a story — The Story — is a historical literary problem.  The Judeo-Christian heritage of Europe has elevated the importance of story in literary interpretation.  But the third key — wonder at patterned creation — unlocks art of the Apollonius text.[14]  That text differs from surviving Greek novels not just in the asymmetry of its intersexual relationships, but also in its marvelously varied patterning of intersexual relationships.[15]  Its relational texture includes romantic love (in the sense of the Greek novels), covenant love (the Judeo-Christian ideal), bare carnal desire (the motive to use a prostitute), and licentious desire most shocking (father-daughter incest).  The affair of the medical student with the beautiful girl’s corpse is an outrageous, highly entertaining focal point in that relational texture.

[1] Apollonius, ch. 26, trans. Sandy (1989) p. 753.  Previous quote is from id.  All subsequent quoted Apollonius text is from that translation, unless otherwise noted.

[2]  The Apollonius text has survived in at least 114 Latin manuscripts written before the eighteenth century and in many vernacular manuscripts written all across medieval Europe.  Numerous references and allusions to it further indicate its popularity.  Archibald (1991) p. 3 & Ch. 3-4. Within the widely disseminated late thirteenth-century work Gesta Romanorum, the Apollonius text is Tale 153, from Latin trans. Swan & Hooper (1976) pp. 259-99.

[6] The prevailing scholarly opinion is that the earliest surviving recension of the Apollonius text is from the late fifth or early sixth centuries. That recension is thought to have developed from a Greek or Latin original from the second or third century.  The earliest surviving Apollonius text is from the ninth century.  A stable text has survived from ninth century, although many minor variations were also produced.  A stable text probably also existed from the sixth century, although the evidence is less compelling.  See Archibald (1991) Ch. 3.  In pondering the relation of Islamic culture to the theme of courtly love in European troubadour lyrics, Grunebaum (1952), p. 238 observed:

The interaction between East and West in the Middle Ages will never be correctly diagnosed or correctly assessed and appraised unless their fundamental cultural unity is realized and taken into consideration. It is that essential kinship of East and West that will account both for Europe’s receptiveness to Arabic thought and to the (more or less) independent growth in the Occident of ideas and attitudes that on first sight appear too closely akin to their oriental counterparts not to be attributed to mere borrowing.

Those observations may also apply a millennium earlier.  A text created through a process of aggregation and redaction, within the common cultural sphere that gave rise to Islam, might well exemplify the same imaginative key as Islamic art more generally.  The Appollonius text is a “carefully patterned and symmetrical story,” and it is “probably the result of an accumulation of oral and literary motifs and garbled historical memories.”  Archibald (1991) pp. 12, 44.  Konstan (2012) fruitfully compares the structure of the Apollonius text to that of the folktale “Hansel and Gretel.”

[7] How the girl got into the medical student’s bedroom is a crux in the Latin text.  Sandy (1989) translates: “With some assistance he took the girl to his bedroom, placed her on his bed, … .” Archibald (1991), in contrast, has: “Taking equipment with him, he brought the girl into his own room and placed her on the bed.”  See Kortekaas (2007) for a philological analysis of the crux.  Id. favors the former sense in translation.  But the overall tone of the section seems to me to favor strongly the latter, improved with explicit use of the terms “his bedroom” and “his bed.”

[8] Sexual stimulation as cure for frozen humors is also a feature in a story of the eminent physician Jibra’īl ibn Bakhtīshū curing a woman who had her arms frozen, outstretched above her head.

[9] While ten thousand gold coins would be a huge fee for a common prostitute, in context that’s not a large reward.  Ten thousand gold coins is the amount of found money directed to the funeral.  The teacher-doctor pocketed a corresponding amount as the finder’s reward.  Moreover, the teacher-doctor declared that he would spend more than the directed amount on the funeral.  Yet when the medical student brought the girl back to life, the teacher-doctor didn’t reward the student with any more money than the directed amount for the funeral.  In the ancient world, reviving the dead was a celebrated feat of the consummate physician.

[10] An Old English Apollonius text has survived in an eleventh-century manuscript amidst Christian legal and homiletic works of Archbishop Wulfstan.  A large middle section of text, including the medical-student section, is missing.  Perhaps that section was too outrageous for a churchman to include.

the wording of G comprises a “third language,” neither purely colloquial nor exclusively literary, in which both fushā {classical literary Arabic} and colloquial are employed in the presentation of each tale.

[13] For example, in the medical-student section of the Apollonius text, the word “touched” is repeated in three important positions.  Word foreshadowing occurs when Apollonius’ tearful wife pleads to go to sea with Apollonius: “Let’s sail together, … let’s live or die together.” The reference to die foreshadows her fate at sea.  Similarly, Apollonius orders that his wife’s coffin have its joints sealed with pitch and covered with sheets of lead before the coffin is thrown into the sea. Those details make sense only in terms of subsequently finding the coffin and reviving the apparently dead wife.  On general techniques of story-telling in the Arabian Nights, see Pinault (1992) pp. 16-30.

[15] On the contrast between symmetry and asymmetry in Greek novels and the Apollonius text, see Konstan (1994).

Archibald, Elizabeth. 1991. Apollonius of Tyre: medieval and Renaissance themes and variations: including the text of the Historia Apollonii Regis Tyri with an English translation. Cambridge: D.S. Brewer.

Konstan, David. 2011. “Apollonius King of Tyre: Between Novel and New Comedy.” Paper presented at 5th Trends in Classics International Conference on Latin Genre, 27-29 May 2011 at the Archaeological Museum of Thessaloniki.

Kortekaas, G. A. A. 2004. The story of Apollonius, King of Tyre a study of its Greek origin and an edition of the two oldest Latin recensions. Leiden: Brill.

Kortekaas, G. A. A. 2007. Commentary on the Historia Apollonii Regis Tyri. Leiden: Brill.