The story of Aziz and Aziza from the Arabian Nights outrageously re-arranges the romance of Daphnis and Chloe from an ancient Greek novel.  The lovers Chloe and Daphnis present a pastoral ideal of love in a wholesome, rustic world.  Through the narrative, Daphnis and Chloe’s faithful love for each other repels outside threats, receives an education in natural sexual skills, and is consummated in marriage.  The story of Aziz and Aziza occurs within the well-established social conventions and interests of an urban, cultured civilization.  It splits the love of Chloe and Daphnis into an ethereal literary ideal and animalistic physical desire.  The story of Aziz and Aziza ends in emasculation and death.[1] 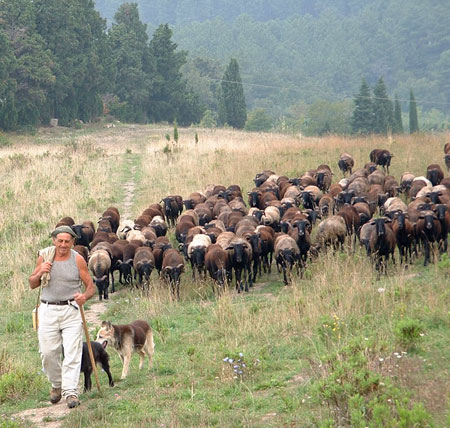 Daphnis and Chloe are young neighbors living in a remote agricultural area.  They fall in love suddenly as adolescents working next to each other as a goatherd and shepherd, respectively.  Love happens to them and bewilders them.  They frequently weep.  They consciously understand the fullness of love only through the course of the third-person narrative that ends with a wedding-night consummation.

Aziz and Aziza are young cousins in a large, wealthy city.  From their early childhood their fathers agree that they would marry.  They grow up in the same house and sleep together without consciousness of love.  As soon as they reach adulthood, their parents draw up a wedding contract and prepare a wedding feast for them.  Aziz, the narrator of the story, makes no mention of love between them as they sleep together right up to the date of their wedding.  Love, with much weeping, becomes a theme of Aziz and Aziza’s story only with the aborting of their wedding.

Chloe and Daphnis are far more similar than are Aziz and Aziza.  While Daphnis and Chloe retain distinct sexual identities, neither dominates the other in virtue, knowledge, or authority.  They behave similarly in love with each other.  In that sense their love is sexually symmetric.[2]  The similarity of Aziz and Aziza’s names and their early arranged marriage contrasts with stark dissimilarity in person.  Aziz observes at their story’s beginning that Aziza is “better informed and more knowledgeable” than he.[3]  A high Victorian Orientalist judged more severely: “Azizah, despite her wearisome weeping, is a girl of high intelligence and Aziz is a vicious zany, weak as water and willful as wind.”[4] Other than both frequently weeping, Aziz and Aziza behave much differently in love.

Aziza loves Aziz with love misplaced from literature like A Pastoral Story of Daphnis and Chloe.  As their love develops, Chloe and Daphnis are not satisfied with swearing oaths merely of fidelity to each other.  Chloe implores Daphnis:

Swear to me, by this herd of goats and the she-goat that suckled you, not to abandon Chloe as long as she remains faithful to you.  But if she does wrong to you, and to the Nymphs, avoid her, hate her, and kill her like a wolf.

Daphnis, pleased with Chloe’s request, swears the oath with a reflexive re-interpretation of Chloe’s claim to self-sacrifice:

Standing in the middle of the herd, holding a she-goat with one hand and a he-goat with the other, he swore to love Chloe while she loved him.  And if she ever preferred another man to Daphnis, he swore to kill himself instead of her. [5]

Aziz is struck lovesick for another on the very day of his and Aziza’s wedding.  He neglects to appear while the officials and guests are gathered for the wedding feast.  Aziza, later weeping in hearing from Aziz why he did not arrive for their long-arranged marriage, recites verses:

If someone says: “Love starts with choice,” tell them:
‘That is a lie; it all comes from necessity.”
Necessity is not followed by shame,
A point whose truth is shown by histories. [6]

That literary claim vibrates with uninterpretable irony as Aziza goes on to interpret for Aziz obscure signs from his new beloved.  Aziza, who as a woman in an Islamic society cannot freely leave her home, laments with a figure of a mighty God: “were I able to come and go, it would not take me long to bring you {Aziz and his new beloved} together and shelter the two of you under my wing.”[7] The story of Daphnis and Chloe, created to “cure the sick, comfort the distressed, stir the memory of those who have loved, and educate those who haven’t,” itself contains love stories.  Aziza similarly tells Aziz love stories to console him.[8]  Chloe first feels love for Daphnis when she bathes him.  Aziza expresses selfless love in bathing Aziz:

my cousin {Aziza} got up, heated water for me and bathed me, after which she dressed me in my clothes.  “Go to her,” she said, “and may God fulfill your need and allow you to get what you want from your beloved.” [9]

Misinterpreting Aziza to be mocking him with her selfless prayer for his sexual fulfillment with his new beloved, Aziz kicks Aziza and gives her a bloody head wound.  This flow of blood recalls with maiden-headly symbolism loss of virginity.  A virgin’s flow of blood is a natural fact that checks Daphnis’ sexual initiative with Chloe.[10]  After Aziza has successfully united Aziz with his new beloved, Aziza dies.  She dies faithfully in love with Aziz and seeking his good.  Her love, like that of Daphnis and Chloe, is a literary ideal.

Natural models of sexual love comically point to harmony in the charmed primal world of Chloe and Daphnis and to human degradation in the civilization of Aziz and Aziza.  Seeking to express physically his love for her, Daphnis asks Chloe to lie naked with him and let him do “What the rams do to the ewes and the he-goats to the she-goats.”  Chloe points out that rams and he-goats mount the sheep and she-goats while standing.  Daphnis and Chloe unsuccessfully attempt this sexual position.[11]  In a parody of such pastoral comedy, Aziz is instructed by the woman who kidnapped him and made him her husband: “All I want you to do with me is what the cock does.”  Within the urban setting of the story, Aziz, who is consistently duller than the women in the story, doesn’t understand:

“What is it that the cock does?” I asked.  She clapped her hands and laughed so much that she fell over backwards.  Then she sat up, smiled and said: “Light of my eyes, do you really not know what the cock does?”  “No, by God, I don’t,” I replied.  “His business is eating, drinking and copulating.” she said.  I was embarrassed by this and said: “Is that really so?” “Yes,” she replied, “and I want you to gird yourself, strengthen your resolve and copulate as hard as you can.” [12]

Aziz never needs to learn how to copulate urbanely.  He does it successfully and repeatedly.[13]  Eventually, however, another woman, with the help of her slave girls, pulls off his testicles and slices off his penis because of his infidelity.  For Daphnis and Chloe, animal sexual desire instructs human desire within natural harmony between humans and animals.  In the story of Aziz and Aziza, animal sexual desire is associated with human degradation.  It points to brutalization and emasculation.

The stories of Aziz and Aziza and Daphnis and Chloe are both highly conscious of love’s forms.  Scholars regard the story of Chloe and Daphnis as sophisticated literature of third-century Greek culture.  The story of Aziz and Aziza is associated with folk literature from the Arabic world.  It has a sure pedigree traced no earlier than the early nineteenth century.  Across wide and uncertain spans of space, time, and genre, communication happens.[14]  These two stories are meant for each other.  They belong together.

[1] The story of Aziz and Aziza fills nights 111-128 of the Macnaghten edition (Calcutta II) of the Arabian Nights.  Richard Burton’s English translation (1885) is available online.  Lyon (2008) is a good, recent English translation from the Arabic.  The Galland Syrian manuscript of the Thousand and One Nights (Arabian Nights) doesn’t include the story of Aziz and Aziza.  Longus’ Greek novel of Daphnis and Chloe has been titled Daphnis and Chloe.  However, some advanced classics scholars now prefer the title Chloe and Daphnis and suggest that Longus, like George Eliot, was actually the name of a woman author.  Gill (1989) is a good recent English translation and the source for the relevant quotations above.

[2] Chloe is primarily associated with sheep and the Nymphs, while Daphnis is primarily associated with goats and Pan.  Their work and spirits are thus gender-typed.  Daphnis and Chloe do not seek sexually symmetric love as if they were political functionaries striving to make their politics personal.  Nonetheless, relative to other important literature depicting intimate relationships, Chloe and Daphnis’ relationship is distinctively symmetric.  See Konstan (1994).

The phenomenon (not rare in life) is explained by the couplet:—

The class of men that Burton considered stupid may have been similar to those that fellow Victorian Henry Mayhew regarded as low brutes.

So I spent the days sitting at home, neither going out nor coming in and neither eating nor drinking.  I put my head in my cousin’s {Aziza’s} lap and she kept consoling me and telling me to be determined, resolute and of good heart.

She came to me, clasped me to her breast and kissed me.  I kissed her and, when she sucked my lower lip, I kissed her lower lip.  I stretched out my hand to her waist and squeezed it and we both came to the ground at the same time.  She undid her drawers, which slipped down to her anklets.  We started our love play , with embraces, coquetry, soft words, bites, twining of legs, and a circumambulation of the House and its corners.

Aziz summarized the night in a four-line poem that concludes:

[14] Grunebaum described the Greek romance pattern as “wanderings of a loving couple, persecuted by fate” and perceives this pattern in nine stories from the Arabian Nights.  Grunebaum (1942), pp. 281-2.  He also described as having a common source Plautus’ Miles Gloriosus and the Arabian Nights story of Qamar al-Zaman and the jeweler’s wife (nights 964-978). Grunebaum (1953), pp. 296-7. , Hamori identified a verse Aziza’s recites “ma halla qattu qalba nadhlin waghdi” (“{love} Never alighting in the heart of a base man,” from her first poetic lines, night 113, trans. Lyons (2008) p. 492) with “al cor gentil rempaira sempre amore” (“love always seeks to dwell in the noble heart”). Hamori (1976), p. 80.  The latter Latin text is from the Italian poet Guido Guinizzelli’s poem from the second half of the thirteenth century.  Guinizzelli was an important influence on Dante and appears in Dante’s Comedia.  More generally, Islamic literature influenced Dante’s Comedia.