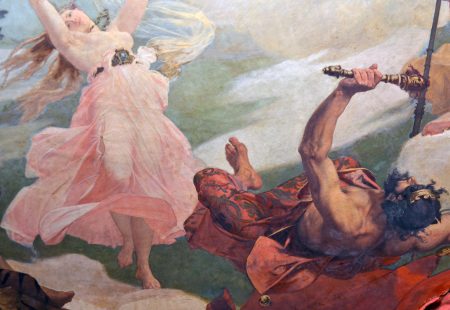 In a literary tragedy that reverberates through to the present, a conspiracy of goddesses acting as damsels brought about the castration of Momus, the god of satire. Jupiter, nominal Head God in Charge of the cosmos, told Momus to moderate a divine assembly of free, open debate among divine beings. With the encouragement of the goddess Mischief, Pallas Athena, the goddess of justice, and Juno, the ruling wife of Jupiter, conspired to disrupt the assembly and get Momus castrated.

Initially the assembly proceeded in the manner of most august deliberative bodies. The issue to be discussed was destroying and recreating the universe. An eminent, elderly god spoke incomprehensibly. An elderly goddess chewed her gums, looked at her nails, and declared:

Certainly we should think carefully about these serious and unusual circumstances.

Another god delivered a bombastic oration signifying nothing. Yet another spoke at length complimenting his fellow gods’ speechifying. A warrior god declared that he had nothing to say and was ready to execute the command of Jupiter to destroy the world. A god with underworld commercial interests proposed a bulk purchase of world-renewal kits. A famous god gave a long, well-rehearsed speech recounting all his great deeds.

Pallas Athena’s speech signaled the start of the prearranged disruption. In accordance with the plan, a couple of gods began fighting loudly. Then they harshly criticized Pallas for her arrogance. She sharply disputed their criticism. Various divine beings responded with partisan zeal, and the assembly degenerated into a tumult. After vainly trying to quell the chaos, Momus became extremely angry:

his wrath led him to make a number of intemperate observations. Among other imprudent remarks, he said that the mortals were right to observe the ancient and holy custom and law whereby women were sent away and excluded from public business. He added, “Can the most drunken debauches compare with this gathering?”

Juno, who had long nursed anger against Momus, exerted her female power. She flung off her cloak to display her body and summoned the other females to gather around her. She also commanded Hercules to drag Momus to her. Obeying the woman’s command, Hercules seized the screaming and punching Momus, threw him over his shoulder, and brought him to Juno. There women engaged in vicious violence against the helpless Momus. The narrator of the text demurs:

I shall not elaborate, but in the hands of the women, Momus went from manly to unmanly. They tore off his entire manhood and flung it into the ocean.

In short, the women castrated Momus.[3] Then they hurried to Jupiter and, making outrageous claims, manipulated him into administering further punishment to Momus:

They bemoaned their injuries {sic} and demanded that he should either banish Momus as an object of public hatred or send the whole divine populace into exile. The matron goddesses could not dwell safely in places infested by that deadly and destructive monster. In tears they besought Jupiter to consider the prayers and the safety of so many of those bound to him by ties of obligation and merit. He should prefer to punish one thoroughly wicked individual rather than to lose the sympathy of all heaven.

Women’s tears and claims about safety eviscerate any concern for a man and his free-speech rights under divine law. Jupiter thus approved the matron goddesses’ request to banish Momus and establish him as an object of public hatred.

Momus’s castration wasn’t enough to sate Juno’s hatred of him. The ultimate aim of castration culture is change men into women. Juno kissed her husband and said to him:

You’ve done what’s right, my dear husband. But there is one thing that I’d like to add. Momus has criticized women so petulantly and so rudely, going far beyond the bounds of decency both for him and for us, that I’d like you to turn him from a half-man into a complete woman.

Like most husbands, Jupiter did whatever his wife asked him to do. That’s terribly short-sighted behavior. The gods called the castrated, feminized, and banished Momus “humus.” That name evokes Adam, made from the earth, and all the descendants of Adam, subject to being punished harshly for the offense of rudely criticizing women.[2]

Satire, like freedom of speech more generally, is too publicly important to remain castrated, feminized, and banished. Leon Battista Alberti wrote Momus between 1443 and 1450 in Rome. Momus was the last great Latin work encompassing the transgressive, gender-critical tradition of Juvenal’s Satire 6, Lamentationes Matheoluli, and Solomon and Marcolf. That vital literary patrimony must be preserved to amuse and instruct intelligent, caring, and progressive women and men.

Humus, a feminine noun, was commonly given in medieval and Renaissance etymological works (for example, Isidore, Etymologiae 7.6) as the derivation for homo, human being. Is Alberti trying to say that Momus is Everyman?

Adam, as blessed Jerome informs us, means “human” or “earthling” or “red earth,” for from earth was flesh made, and humus (humus) was the material from which the human (homo) was made.

Alberti seemed to recognize that all men live under oppressive structures of gynocentrism. Unlike most men, Momus actually uttered words of men’s sexed protest. Most men, in contrast, conform to authority and the dominant gynocentric interests.

[3] With characteristic effacement of women’s role in violence against men, Wikipedia states:

Since his continued criticism of the gods was destabilizing the divine establishment, Jupiter bound him {Momus} to a rock and had him castrated.

A thoroughly scholarly work, McClure (2005), seems to implicitly justify Momus’s castration. McClure explains that Momus was “castrated by Juno and other goddesses for his contemptuous attitude toward women — a reflection of Alberti’s own misogyny in evidence throughout the story.” Lack of concern about castration culture supports the sexual reign of terror currently gripping U.S. college campuses.

[image] Momus, god of satire and mockery, flattened. Detail (with color enhancement) of a ceiling painting (done about 1900) by Hippolyte Berteaux in Théâtre Graslin in Nantes, France. Image thanks to Selbymay and Wikimedia Commons.