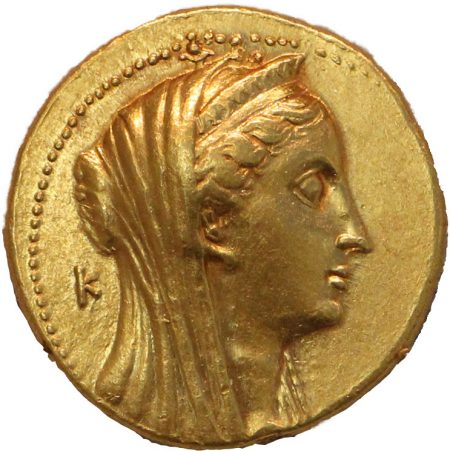 Just as it is today, men criticizing women in the ancient world was dangerous. Whether it was the foolish lad Ascalabus criticizing the goddess Demeter for boozing, or the high official Telesphorus criticizing King Lysimachus’s wife Arsinoe for vomiting, the results were the same: disaster for the man.

The goddess Demeter threw her drink onto Ascalabus’s face when he criticized her. She had come thirsty to his mother’s house. His mother generously gave her a potent drink. Ascalabus laughed at Demeter for drinking so eagerly. He may have called her greedy. He may have sarcastically offered to give her a full cask to drink. Whatever words he said, she got offended and threw her drink into his face. The results were cataclysmic:

His skin, absorbing it, became spotted, and where he had once had arms, he now had legs. A tail was added to his altered limbs, and he shrank to a little shape, so that he has no great power to harm. He is like a lesser lizard, a newt, of tiny size. [1]

Ascalabus’s mother wept as her son, turned into lizard, scampered away. Mothers must teach their sons that a man’s life matters no more than a tiny newt when a woman gets offended.

Telesphorus was tortured and killed for witty criticism of King Lysimachus’s wife Arsinoe. At a party, Arsinoe was forcing herself to vomit so that she could drink more. Telesphorus made fun of Arsinoe with a quip to the persons who came with her:

You are causing trouble by bringing in this vomiting woman [2]

That line adapted the first line from Euripides’s couplet:

You are causing trouble by bringing in this Muse,
idle, lover of wine, careless of money.

Telesphorus didn’t explicitly call Arsinoe a boozer or a drunkard, even though that’s what she apparently was. Lysimachus responded brutally to Telesphorus’s witty words:

He mutilated his own friend, Telesphorus the Rhodian, cutting off his nose and ears. He kept him for a long while in a den, like some new and strange animal, after which the hideousness of his hacked and disfigured face, assisted by starvation and the squalid filth of a body left to wallow in its own dung, made him no longer appear to be human! Besides this, his hands and knees, which the narrowness of his abode forced him to use instead of his feet, became hard and callous, while his sides were covered with sores by rubbing against the walls. His appearance was no less shocking than frightful. His punishment turned him into so monstrous a creature that he was not even pitied. [3]

Historically, men who consensually “got a woman pregnant” were castrated for their loving effort. If not outright violence against men, men’s criticism of women tends to produce quickly defenses of women and apologies to women.

In addition to being a drunkard, Arsinoe was a violent, vicious woman who bedded her brother. She reportedly killed a step-son of King Lysimachus in order to ensure that her children would inherit the throne. When Lysimachus died, she married her half-brother. That marriage failed after she conspired against him. She then fled to the household of her full brother, Ptolemy II, in Egypt. There she instigated the exile of her brother’s wife and then married her brother. The poet Sotades warned Ptolemy II:

You’re thrusting your poker into an unholy slot [4]

For that frank warning, Ptolemy had one of his generals administer an early form of cement shoes to Sotades:

{the general} stuck his feet in a jar full of lead, took him out to sea, and drowned him.

A caring friend might consider warning a man against his plans to marrry. But even warning a man about marrying his vicious, alcoholic sister can be dangerous.

Given the realities of gynocentric society, Arsinoe was soon deified. She was worshiped in cult shrines from Alexandria to Athens. Her face was imprinted on gold coins issued over 2200 years ago. Ptolemy II named various streets in Alexandria with her name and honorary epithets for her, such as “the Queen,” “the Consoler,” “of Victory,” “the Saving One,” and “she who brings things to completion.” Arsinoe, of course, in recent writing has been rapturously celebrated as a powerful woman ruler.[5]

Men’s deaths matter relatively little in gynocentric society. Men should squarely recognize that reality before they dare to criticize women.

Demeter in anger poured over him what was left of her drink. He was changed bodily into a multi-coloured gecko {askalabos} which is hated by gods and mankind. He passes his life along ditches. Whoever kills him is cherished by Demeter.

Those who love insulting jokes are dangerous perhaps because they often unveil truths that must be kept covered for the sake of kings, rulers, politicians and rich individuals.

Milanezi (2000) p. 410. The most fundamental aspect of the dominant social order is gynocentrism. Mockery and sarcasm are threats to gynocentrism. Thus those who engage in such verbal expression are labeled “the incarnation of disorder.” Id. p. 411. For another example, Stratonicus the Athenian, as described in Athenaeus, Learned Banqueters 8.352.

his fine noble spouse, who makes him a better wife than ever clasped bridegroom under any roof, seeing that she loves with her whole heart brother and husband in one.

Celoria, Francis, trans. 1992. The Metamorphoses of Antoninus Liberalis: a translation with a commentary. London: Routledge.

4 thoughts on “Telesphorus tortured & killed for witty criticism of Arsinoe”