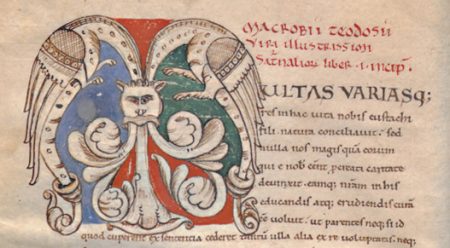 In Rome about the year 431, the Right Honorable and Illustrious Macrobius Ambrosius Theodosius wrote a series of books for his son. With these books,  father offered son “a fund of knowledge {scientiae supellex},” an “accumulation of things worth knowing” {noscendorum congerium pollicetur}.” Macrobius didn’t merely heap together bits of ancient knowledge. He subtly ordered them, blended them, and digested them so that they would provide zest in learning and harmony of understanding.[1] Such transmission of knowledge was vitally important for men in fifth-century Rome, just as it is for men today.

For dessert after a banquet of knowledge, Macrobius arranged a series of jests. Macrobius’s concern for verecundia (modesty, discretion, and decorum) prevented him from discussing directly important aspects of gender under gynocentric society.[2] Jests provide an opportunity for communicating aspects of reality not otherwise discussable.

A man visiting Rome from a province attracted crowds because he appeared as if he were Caesar Augustus’s brother. Caesar summoned him and asked, “Was your mother ever in Rome?” The man answered, “No, but my father was many times.”[3]

Nonetheless, women in ancient Rome were less subject to social control than men were. Julia, the daughter of Caesar Augustus, wore extravagant and provocative clothes. She was known for licentiousness. Caesar himself behaved more modestly. When asked why she didn’t behave soberly as her father did, Julia saucily replied, “He forgets that he is Caesar, but I remember that I am Caesar’s daughter.”[4] Julia ignored her political responsibility to model normative behavior. Unlike Caesar, she acted as her privilege allowed. From the most privileged to the least privileged groups of men and women, men are more constrained in the exercise of privilege.

The cultural construction of gender forces men to struggle to be virtuous and to be recognized as men. Men are commonly disparaged as pigs, or accused of behaving like dogs. Macrobius recorded for his son a jest that Julia made:

When people aware of her outrageous behavior expressed surprise that her sons looked just like Agrippa {her husband}, though she had been so free in letting others enjoy her charms, she said, “I take on a passenger only when the ship’s hold is full.” [5]

The point of this jest isn’t merely Julia’s shrewd and heartless technique of birth control. The narrator immediately instructs the reader:

Compare the mot of Marcus Popillius’ daughter: when someone wondered why other animals sought a mate of the species only when they wished to become pregnant, she replied, “Because they’re animals.”

Immediately following the women’s jests about being promiscuous while pregnant, Macrobius placed a jest about public contempt for a man. Vatinus was stoned for not offering the public a sufficiently entertaining gladiatorial show. Roman officials subsequently issued a decree that only fruit could be thrown in the arena. When an official was asked if a pine cone was a fruit, he ruled:

If a person is going to throw it at Vatinus, it’s a fruit.

Throwing stones at men, or at boys, like joking about men getting raped, doesn’t violate decorum in gynocentric society. Publicly criticizing women, in contrast, is extremely dangerous.

Men’s subordinate social status generates tighter constraints on men’s sexuality than on women’s. The dessert discussion session ends with an uninvited guest, the aristocratic, bullying Evangelus, urging the men to “act like men”:

As in battle, then, we have to square up to the enemy — pleasures and indulgence in wine — and fight them at close quarters, so that we fortify ourselves against them not by flight or evasion, but by relying on mental exertion, unswerving resolution, and moderate indulgence to preserve our balance and self-restraint.

Unlike women, men must respect norms to be socially recognized as different from animals:

We understand that the two pleasures of taste and touch — that is, food and sex — are the only ones that human beings share with the beasts, and that’s why anyone wholly in the grip of these pleasures is counted among the animals of the fields and the wilds; all other pleasures, which derive from the three remaining senses, are peculiar to human beings. … Will anyone with a shred of human decency, then, exult in these two pleasures, of sexual intercourse and gluttony, which human beings share with swine and asses? [6]

Women can and do exult in those pleasures. Julia and another elite woman were examples that Macrobius recounted under the cover of jests. Men, in contrast, face more social pressure to uphold verecundia and the gynocentric construction of virtue. Macrobius’s son probably would have understood the lesson better than most modern readers have.

Today, men’s sexuality is broadly criminalized, men have no reproductive rights, and cuckolding of men is institutionalized in official paternity establishment procedures. Today, with freedom of expression more constrained in Western countries than it was in the early Islamic caliphates or in medieval Europe, few dare to discuss men’s significant social and political disadvantages. Macrobius points to the importance of men getting together in men-only environments and jesting.

[1] Saturnalia, Preface, pp. 3-9. The quotes are from p. 5. The discussion reportedly offered “plenty of applications for the conduct of life.” Saturnalia 1.2.8, p. 17. The dating of the Saturnalia to 431 GC is based on the work of Alan Cameron. For discussion, id. pp. xiv-xvii.

[3] I’ve lightly paraphrased the jest from Macrobius, Saturnalia 2.4.19-20, from Latin trans. Kaster (2011) p. 353. All subsequent page references to the Saturnalia are in id. Bill Thayer has commendably made the Latin text of the Saturnalia available online.

A similar resemblance jest is recorded in Valerius Maximus, Memorable Deeds and Sayings 9.14.3. Valerius wrote that work about 30 GC. The jest, with minor variations, has occurred in a variety of contexts through to the present.

when he saw his crowd of grandchildren and their resemblance to Agrippa {Julia’s husband}, he was ashamed of doubting his daughter’s fidelity. And so Augustus deluded himself with the thought that his daughter’s high spirits gave the appearance of license but were innocent in fact

he began to speak about Julia in these terms: ‘She was thirty-seven, a point in life when — if you have any sense left — you know you’re no longer young, but she was abusing her standing as fortune’s darling, and her father’s.

Saturnalia 2.5.1-2, p. 361. When Julia was thirty-seven, Augustus exiled her for adultery. He ultimately refused to allow her to be buried with him in his Mausoleum. Long (2000) pp. 348-9. Saturnalia never mentions Julia’s exile, but surely Macrobius was aware of it. Macrobius’s point was women’s license, not the unusual punishment of Julia.

One thing that we almost entirely miss in Rome is the tradition of subversive female laughter — what we call giggling — that is a distinctive strand in modern Western culture and can be glimpsed as far back as Geoffrey Chaucer. … this form of laughter, including its cultural and literary construction, is almost exclusively associated with women and “girls”; in its strongest form, it is, in Angela Carter’s words, “the innocent glee with which women humiliate men.”

I am referring here not just to moments when a woman laughs (or women laugh) at a man (or men) but when she laughs, in a gendered role, as a woman, at a man (which is what, in its powerful and positive valuation, the giggle signifies).

Id. p. 259, p. 5. Men should weep that such work stands on the commanding heights of intellectual life today.

Women had a kind of license to admit sexuality. Julia and Populia joke acknowledging desire, whereas Avienus {a man banqueter in Macrobius’s Saturnalia} is squashed for an ambiguous hint about after-dinner music.