In La Saineresse, an Old French fabliau from the twelfth or thirteenth century, a man had the temerity to challenge women’s superiority in guile.  The man boasted that no woman could deceive him.  That boast annoyed his wife.  The husband’s boast was just transgressive words, but the wife rehashed those words to herself and became deeply offended.[1]  The wife resolved to put her husband in his (properly subservient) place. 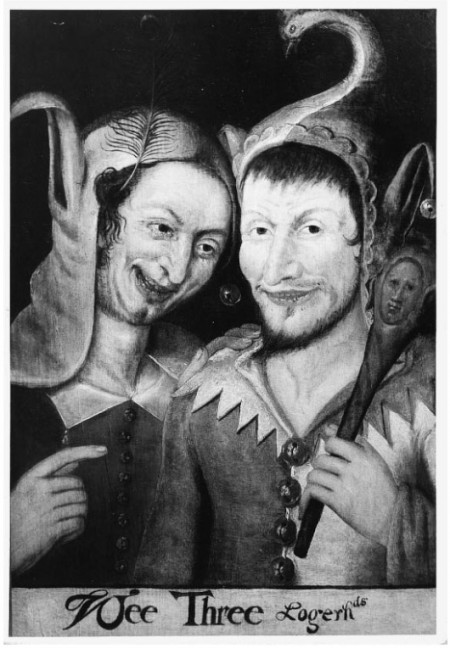 One day a rogue dressed as a woman and pretending to be a doctor arrived at the home.  The wife, who had summoned the doctor, evidently was in on the ruse.  The doctor asked the wife, “tell me your pleasure.”[2]  The wife asked to the doctor to come upstairs with her for awhile, for she needed “professional assistance.”  Upstairs, the wife and the doctor had sex.  Then:

When they’d had all the fun they wished,
Screwed, embraced, and hugged, and kissed,
They rose and went downstairs again. [3]

The husband, oblivious to the nature of the doctor’s treatment, urged his wife to pay the doctor well.  Evidently she controlled their purse.  The wife sharply told her husband to mind his own business.  The false doctor then left without the wife paying him.

The wife’s malice toward her husband went further than cuckolding him.  She also ingeniously described to her husband in intimate detail her having sex with the doctor.  The wife’s purported problem was with her kidneys, and the doctor’s pretextual treatment was the common ancient medical practice of bleeding the patient.[4]  The wife’s trick was to use equivocal language that her husband lacked the wit to understand fully:

I strained as hard as a woman could.
A hundred strokes. It did no good.
I couldn’t bleed. She thumped me till
My flesh was as soft as dough, and still
I didn’t bleed a single drop.
Three times she took me, and atop
My loins she placed two heavy tools
And struck me blows so long and cruel
I felt the pangs of martyrdom,
But not a drop of blood would come.

The account climaxed with the application of an ointment:

When all the hammerings had ceased,
This easeful ointment she applied
Upon my wounds both deep and wide
Until it cured me of my ache.
This medicine was good to take.

Adding to her description of the erect penis as a tool of welcomed violence, the wife also described it as ugly and crude:

This ointment issued from a dropper
Down through a pinhole in a stopper
That was grotesque and dark and rude.
But glory be, the salve felt good! [5]

The husband responded ignorantly and sympathetically: “My dear, I fear you must have almost died.”  The wife delighted in gulling him sexually and verbally.  Male and female scholars explicating this fabliau have found similar delight.[6]

Not merely the matter of a fabliau, malice toward cuckolded men is a deep feature of human social life.  That some women and men behave with malice towards others is widely known through personal experience.  That some men and women are utter dupes is also widely known.  Less commonly recognized is that the force of law has long imposed legal fictions of paternity on cuckolded men.  If the wife gives birth to a child from having sex with someone other than her husband, the husband is often still responsible legally for the child.  Law-based cuckolding of men has been extended to impose financial obligations on unmarried men who falsely believe a woman’s claim of sexual fidelity.  The legal system of malice toward cuckolded men shows the extent to which women’s interests socially dominate men’s.

[1] In La Saineresse, ll. 5-6, the wife “en parla priveement & en jura .i. serement…” DuVal & Eichmann (1992), The Lady Leech, p. 60, translates those lines as “The more she pondered it, the more / she was annoyed.  At last she swore….”  Dubin (2013), The Healer, p. 525, translates these lines as she “spoke about it on the sly, / swearing an oath….”  The wife’s “private” discussion of her husband’s boasting and the wife’s “swearing an oath” seem to me best interpreted as internal, figurative acts.  They suggest her inner disturbance at her husband’s boasting.  DuVal & Eichmann’s translation better captures that sense.  The French text is available online in Barbazan & Méon (1808), v. 3, pp. 451-4.

[4] The title of the fabliau, La Saineresse, means in context a female member of the medical bleeding profession, or more humorously, a “lady leech.”  The saineresse (doctor) arrived equipped with “a kit of tubes and bleeding cups.”  The kidneys in medieval understanding were a source of sexual desire.  The wife told the doctor that she suffered from “goute es rains mout merveillouse.”  That’s literally sickness (gout) in the kidneys.  The meaning of the phrase “goute es rains” covers a lower-back ache and sexual yearning.  A more direct term for the later is the closely related term “goute en l’aine” (itchy loins).  Levy (2000) p. 223, p. 230, n. 46.

[5] The fabliau Le Peschor de Pont-Sur-Seine (The Fisherman of Pont-Sur-Seine) similarly explores a wife’s contradictory feelings and actions in relation to her husband’s genitals.  The wife describes her husband’s genitals as repugnant: “your little hanging bit of bowel.  There’s nothing else I find more foul.”  Trans. Dubin (2013) p. 443.  Most literary scholars seem to interpret such an attitude toward male genitals as natural.  At the same time, they describe the fabliaux as a celebration of the phallus, marred by occasional antifeminism.

[6] The wife’s treatment of her husband is “deserved punishment.” DuVal & Eichmann (1992), prefatory note, p. 60.  A leading scholar of fabliaux has declared:

The story is funny enough in itself, though crude, but placed in the courtly context it gains a third level of reference that makes it even more witty.

Nykrog (1974) p. 68.  According to another leading scholar of fabliaux, the wife’s description of her experience with the doctor, including her description of the man’s penis, “catches something of the quintessence of fabliau humor.”  Pearcy (1974) p. 180. A newly minted literature Ph.D. described that passage as “so delicious.”  Regarding the wife’s delight in energetic extra-pair sex, the new literature doctor diagnosed:

This overabundance of frustration is obviously due to the fact that the bourgeois {her husband} is not fulfilling his husbandly duties. … She has obviously exercised some restraint in not cheating on him before.

Nykrog, Per. 1974. “Courtliness and the Townspeople: The Fabliaux as a Courtly Burlesque.” Pp. 59-74 in Thomas Darlington Cooke and Benjamin L. Honeycutt, eds. 1974. The humor of the fabliaux: a collection of critical essays. Columbia: University of Missouri Press.

Pearcy, Roy J. 1974. “Modes of Signification and the Humor of Obscene Diction in the Fabliaux.” Pp. 163-196 in Thomas Darlington Cooke and Benjamin L. Honeycutt, eds. 1974. The humor of the fabliaux: a collection of critical essays. Columbia: University of Missouri Press.