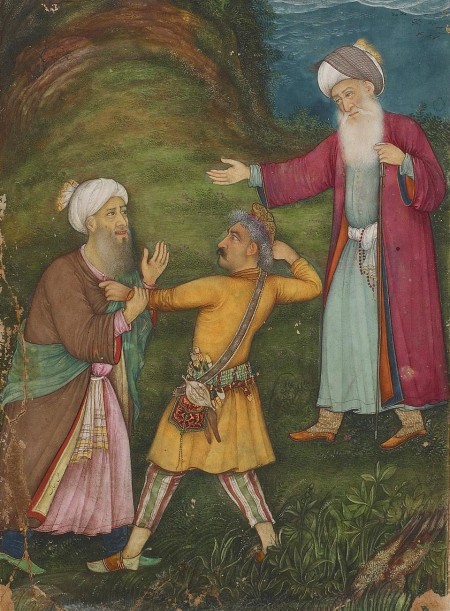 Western societies today sternly condemn verbal expression labeled abusive, harassing, hateful, racist, sexist, homophobic, or otherwise popularly recognized to be repugnant. The lines defining such expression are far from clear. The chilling effects on public discussion are obvious. Yet particularly if the matter is publicly framed as men attacking women, democratic ideals, basic principles of fairness, and law are easily trampled in publicly applauded crusades to control and punish. A leading medieval scholar has suggested that medieval Europe repressed obscenity less than Western countries do today.[1] Both obscenity and abusive expression surely were less repressed in the ancient Islamic world than in the United States today.

Because claims that men are committing sexual violence against women is a potent tool for inciting men to anger and action, such claims function effectively as tools of abuse. Late in the first century of Islam (the seventh century in the Gregorian calendar), the eminent Arabic poet Jarīr attacked the eminent poet al-Farazdaq. Jarīr publicly claimed that al-Farazdaq had failed to protect his sister Jiʿthin from being raped. Jarīr declared in the poetic public sphere:

Al-Farazdaq’s sister, daughter of his father and mother,
spent the night going along in a fast gallop.
The cowards surely knew that their girl
was being trodden upon like a main road.
Will you not be angry with the heroes of Muqāʿis,
when they hurried to bring humiliation upon you?
I have been told that Jiʿthin defended herself against them with her arse,
since she did not find anyone from Mujāshiʿ to defend her. [2]

Jarīr repeated his rape claim in many poems and elaborated on it in various ways. In invective against al-Farazdaq, Jarīr wrote:

Did you not see Jiʿthin among the men of Saʿd,
called ‘the broad’ after her virginity?
She wiggled her rump when he went beyond her knees
and shook towards her a mighty dong, which subsequently disappeared.
When the girl of the Banū Tamīm coughs,
the gate of her perineum is fed with dust.
One can see a white leprous spot where her labia are joined,
like the tuft of hair on al-Farazdaq’s lower lip when it is grey. [3]

There’s no question that Jarīr’s claims of rape were lies: “Jarīr was obviously lying in his verse on Jiʿthin and everyone knew it.”[4] The point wasn’t the truth of the rape claims, but Jarīr’s poetic skill in publicly humiliating al-Farazdaq. Jarīr’s verbal abuse of al-Farazdaq drew admiration from the literary elite. They studied this poetry and anthologized it. Jarīr’s obscene, abusive verses became part of the corpus of classical Arabic poetry.

Invective (hijāʾ) was a well-recognized genre of classical Arabic poetry. An Arabic poet of the pre-Islamic period verbally attacked a well-known, noble man to gain social status. The poet explained, “I wanted to put my poetry in its proper place.”[5] Similarly, a young poet verbally attacked the eminent poet Jarīr, evidently hoping to draw a counterattack and engagement at a high poetic level. Jarīr, however, ignored the attack. The young poet lamented, “If he had answered, I would have been a great poet.”[6] Another famous poet of Jarīr’s era observed:

How many an ignoble one would like me to abuse him,
even though my abuse on him should be as {bitter as} colocynth!
But generously refraining from abusing an ignoble one
harms him more than abuse when he is abused. [7]

Far from being condemned, harsh verbal attacks were a conventional way to attract attention, demonstrate poetic skill, and make a name for oneself.

Rather than seeking authoritative means to punish Jarīr for his verbal abuse, al-Farazdaq responded with skilled poetic abuse of Jarīr. For example, al-Farazdaq claimed to have raped Jarīr’s mother:

They brought Ḥiqqa {Jarīr’s mother}, having stuffed her perineum,
while a hireling, saddler of beasts, was singing to make the she-ass go.
She stopped to scold me but I said to her, ‘On your knees,
Ḥiqqa, you and your collected works will be underneath!’
And I bared my prick to her. She cowered,
just as a she-ass in heat cowers.
She found someone with a hard-on, who had changed into easy clothes;
and someone who does scandalous things will change into easy clothes.
And I left your mother, Jarīr, as if she were,
kneeling, for the people a well-trodden road. [8]

Al-Farazdaq then went on to claim that Jarīr got pregnant and had an unusual daughter:

Ḥiqqa, I have never heard about a man with
two testicles who got pregnant, except al-Marāgha’s son {Jarīr}.
He drank the sperm and in his belly there grew
an uncircumcised woman whose clitoris is itching at the end. [9]

This isn’t a dirty tale told by peasants lounging in the barnyard. Al-Farazdaq was an acclaimed, widely anthologized, classical Arabic poet. He contributed to establishing the language of classical Arabic literature.

Al-Farazdaq himself incorporated appreciation for an eminent classical Arabic poetic form in a line of invective. Al-Farazdaq wrote of Jarīr:

He is crying on the dungheaps of the abandoned campsites, while his mother, on the tips of the slaves’ penises, is going up and down. [10]

In this poetic line, al-Farazdaq conflates two section of the classical Arabic qasīda. The qasīda begins with a section, called the nasīb, in which the man poet weeps nostalgically at the abandoned campsite of his beloved. In the second section of the qasīda, the rahīl, the man poet journeys on a she-camel to a new place. Al-Farazdaq mocks the elegiac tone of the nasīb with the smell of dungheaps. He transforms the rahīl into Jarīr’s mother riding up and down on slaves’ penises at the same campsite at which Jarīr is weeping. Tweeting something like al-Farazdaq’s venerated line of classical Arabic poetry would probably get a person banned from Twitter, at least if such invective were directed at a woman.

Words of individuals are much less dangerous than acts of totalitarian institutions. Failure to appreciate the difference between an individual’s words and acts of powerful institutions is an ominous sign.[11] Obscene, abusive words, preserved for centuries as classical Arabic literature, can open minds and open societies if those words are heard.

[2] From Arabic trans. van Gelder (2015) p. 179. “Trodden upon” is an disparaging metaphor for a man having sex with a woman. Jarīr ibn ʿAṭiyya (died c. 728) was a “giant of Arabic literary history … universally lauded as a poet excelling in delicate love lyrics.” Id. p. 176. Hammam ibn Ghalib, Abu Firas, known as al-Farazdaq (died c. 729) was a “famous poet … one of the great poets of the Umayyad period.” Id. p. 175. Al-Farazdaq wrote a sophisticated critique of the famous muʻallaqah of Imruʼ al-Qays.

[3] From Arabic trans. id. p. 181. The last two lines above (a single line of Arabic verse) was “often quoted by the critics and anthologists … they mention it for its ‘wonderful comparison.’” Id.

[7] Al-Muʾammal Ibn Umayl (died c. 806), from Arabic trans id. This is an early statement of what has now become known as the Streisand effect. A similar effect concerns legal remedies. Law addresses rights and obligations, while invective concerns honor and shame. An invective target who seeks legal recourse can increase his shame through public acknowledgement of harm and personal weakness. Id. p. 130.  That effect is likely to be much stronger for men targets of invective than for women targets.

[11] Solterer (1995) illustrates well gynocentric scholarship making absurdly broad claims about men “verbally injuring” women in medieval Europe. In the U.S. today, four times more men than women are victims of fatal physical violence. Ten times more men than women are being forcefully held in the violent circumstances of prisons and jails. Those life-breaking gender inequalities are much easier to understand than any aspects of medieval discourse. They are also much more important, and largely ignored.

[image] Galen watching a dispute, detail of folio from a Gulistan (Rose Garden), illumination from early 16th century, Mughal dynasty.  Freer Gallery of Art and Arthur M. Sackler Gallery, F1998.5.60, Gift of the Art and History Trust in honor of Ezzat-Malek Soudavar. Thanks to the Freer | Sackler for making its art widely accessible on the web. Galen was a pugnacious physician and scholar in second-century Rome.