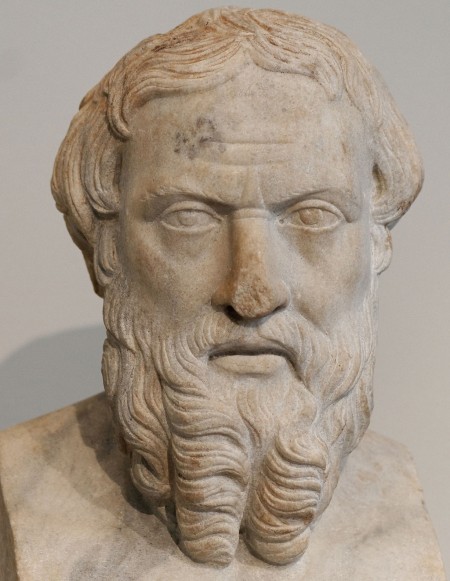 His wife at first kept this a secret, but then, perhaps under questioning, perhaps not, she told her mother. Her mother told Megacles. He was exceedingly angry about the dishonor Peisistratus had done to him. Megacles made up his quarrel with his political adversaries. When Peisistratus learned of the moves being made against him, he immediately fled the city. [1]

If some male equivalent to female birth control pills had been available to Peisistratus, he could have avoided this major political setback and dangerous situation.

The medieval Latin poem Amor habet superos plausibly presents a man like Peisistratus having heterosexual intercourse while taking care to avoid an unintended pregnancy. The man, probably a cleric, may have been “hot with flaming desire for an outstanding maiden.”[2] The refrain of the poem sings:

In love’s consolation,
I play the virgin with a virgin;
I plow without sowing,
I sin without committing a crime.

The poem has been interpreted as praising “qualified continence” with restraint from sexual intercourse. The poem has also been interpreted as reducing “purity to a fetish,” with the refrain providing a “leering undertone.”[3] These over-all interpretations efface inconsistencies across the stanzas and the refrain. In the two manuscripts in which the poem survives, the refrain is missing in one, the stanzas are variously ordered, and an additional stanza occurs in one of the instances. Moreover, within medieval Christian belief, lust for a particular maiden is morally equivalent to having sex with her.[4] The surface assertions of other stanzas in the canonical construction of the poem don’t foreclose more specific meaning for this refrain.

The refrain’s distinction between sinning and committing a crime is best understood to distinguish between having sex and creating an illicit pregnancy. Worldly authorities cannot punish sexual sins known only to the couple and God. An illicit pregnancy brings sexual sin to the attention of worldly authorities for criminal punishment.[5] Men burning with desire thus seek to “plow without sowing,” i.e. have sex without producing children. In enjoying “love’s consolations,” the linguistic game of defining what having sex means allows lovers to “play the virgin with a virgin” while engaging in genital intercourse.[6]

Men in colonial America used birth-control techniques to avoid the burdens imposed on them from having children. Men choosing to control their reproductive capacity was controversial:

in 1710, for instance, Abigail Emery of Newbury accused her husband of Onan’s “abominable” sin, which he practiced, she claimed, because “he feared the charge of children.” Russell Knight stopped sleeping with his wife Mary because of her ill treatment, and told her that he would not risk producing “a Parcel of young Children more to make him a Slave as long as he lived when she {Mary} would not do anything to help him.” [7]

Some men in colonial America regularly practiced withdrawal before ejaculation. In Britain between the 1920s and 1950s, husbands had primary responsibility for birth control within married couples. Withdrawal before ejaculation, along with abstinence from sexual intercourse of reproductive type, were common practices of birth control among married couples.[8]

Forces of oppression, ignorance, and superstition today propagate the myth that men don’t care about birth control. That is ludicrous. Under current U.S. “child support” laws, men have good reason to be acutely concerned about birth control. A man who contributes sperm to a pregnancy that he didn’t intend may for no additional reason be legally deprived of about 30% of his income for the next eighteen years of his life or longer. That financial imposition occurs through required “child support” payments under state-imposed forced financial fatherhood.[9] While men now are more effectively and comprehensively denied reproductive freedom than ever before, men throughout history have been concerned about birth control and unintended pregnancies. New birth control technologies for men are likely to have a huge market if they can overcome sexual-political interests opposing reproductive choice for men.

A court case that came before the thirteenth-century Byzantine bishop and judge Demetrios Chomatenos who suffered physical abuse because she refused to allow her husband to sodomize her:

The jurist recognized that the law did not permit the dissolution of marriage for this reason but, as the woman was threatening to kill herself, he granted the divorce “so that the one evil {sodomy} would not be augmented by an even greater one {suicide}, and so that inexperienced judges, cleaving to the letter of the law, do not provoke a death rather than lead {the people involved} to salvation.”

Chomatenos, Decision 17, from medieval Greek trans. Messis & Kaldellis (2016) p. 25. Whether the husband sought to engage in sodomy in order to have sex without reproductive risk isn’t clear.

[2] Carmina Burana 88 (Amor habet superos) 4.1-2, from Latin trans. Walsh (1993) p. 95. Here’s a full Latin text, with a slightly different construction of the stanzas than Walsh provides. For the translation of the refrain, I’ve adapted Walsh’s translation to reflect my sense of the Latin.

[4] In the Carmina Burana, Amor habet superos doesn’t have a refrain. Moreover, its text is conflated with the next poem and the order of stanzas is “hopelessly confused.” Walsh (1993) p. 96. The poem also survives in the manuscript Florenc Laur. Edili 197. That version includes a stanza that Walsh describes as “a clearly spurious supplement, defective in rhyme and irrelevant in context.” Walsh thus omits it. Id. On the conjunction of textual and literary criticism for the Carmina Burana, Dronke (1975).

The canonical construction of the poem has literary problems. St. 6 gives the maiden’s name for the first time (Cecilia) and refers to her in the third person. St. 9, however, is directly addressed to “dear maiden.” St. 4-5 suggest no interest in continence or restraint. St. 8, however, sets out the medieval convention of the five stages of love (quinqua lineae amoris). The first four are enumerated — “to gaze, talk face to face, to touch, and finally to kiss” — and of the fifth (intercourse), the poet declares “you must not suspect.” On Christian teaching on lust, see, e.g. Matthew 5:27-8.

[5] Carmina Burana 126 (Huc usque, me miseram) expresses, from the viewpoint of a woman carrying an illicit pregnancy, the social stigma she feels. In the last three stanzas of the poem, the women acknowledges the greater punishment imposed on her lover and the pain that punishment causes her:

What compounds my grief is that my boyfriend is in exile, just because of this pecadillo.

He has retired to the furthest borders of France because my father dealt with him harshly.

His absence is the cause of my melancholy and increases my pain.

From Latin trans. Walsh (1993) p. 158. Here’s the full Latin text. Huc usque, me miseram has survived only in the Carmina Burana. The canonical Latin text of the poem excludes an initial stanza and a refrain Eya / qualia / sunt amoris gaudia (“Eya, such are love’s delights”). In the context of the poem, the refrain makes sense only ironically. For discussion of the textual issues, Parlett (1986) p. 224.

[6] Ex ungue primo teneram, a Latin lyric from before 1210, presents a form of sexual restraint with respect to a girl mistakenly thought to be a virgin. The girl in that poem is only seven-years old. The poem’s narrator complains:

I remember ordering my weapon to stay outside, not to hurt a little girl by going in too deep —

But that impudent little creature thought she’d like far bigger spear-thrusts — though so small, she got all that a woman desires.

From Latin trans. Dronke (1965) v. 2, p. 379, with a minor adaptation for a more literal translation. A man actually having sex with a pre-pubescent girl would be regarded as viciously criminal in medieval Europe, as in most other societies throughout history. Men in medieval Europe were castrated merely for having consensual non-marital sex with a mature woman.

At a poetic level, Ex ungue primo teneram has none of the literary merit of Lolita. The penis is a vitally important, life-seeding part of a man’s body. Weapons are intended to do harm and kill. The poem’s figuring of penis as weapon sickeningly disparages men’s humanity and men’s sexuality. Other medieval Latin poetry protested women’s insistence on alternate use of a man’s penis. Overall, while indicating alternatives for genital intercourse, Ex ungue primo teneram is deeply misandristic.

[9] If the man ordered to make “child support” payments experiences a financial setback, such as unemployment, he can be incarcerated, without the benefit of counsel, for being unable to produce the mandated payments. Of course, opportunities for an incarcerated man to provide child support of any sort are greatly constrained. Moreover, mandated child-support financial obligations continue to accrue for incarcerated persons.

[image] Marble sculpture of Herodotus. 2nd-century Roman copy of a Greek bronze from the first half of the 4th century BGC. Now held at Metropolitan Museum of Art (New York) Department of Greek and Roman Art, Gallery 162, accession no. 91.8. Detail of photo thanks to Marie-Lan Nguyen and Wikimedia Commons.