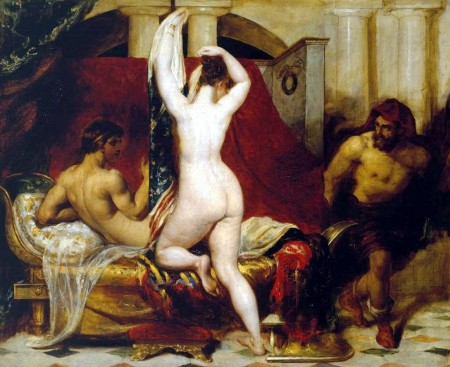 “When a woman takes off her clothes, she takes off her modesty.” That was an old saying in Greece about 2,500 years ago.[1] Ancient authors discussed it with respect to wives’ behavior in the marital bedroom. Yet in its context in the ancient Greek story of Gyges and Candaules, that aphorism concerned controlling men’s strong, visually stimulated sexual desire and seductive power.

A man seeing naked a woman other than his wife was primarily a violation of the social order. In the story of Gyges and Candaules, King Candaules arranged for his favorite bodyguard Gyges to see his queen naked in their bedroom at night. When that occurred, the queen sensed Gyges covertly looking at her. According to an ancient Greek tragedy, the next morning the queen woke the king early and sent him out to provide law for the people. She simultaneously rationalized presenting Gyges with a murderous ultimatum:

when arose the brilliant star, forerunner of the dawn of the first gleam of day, I roused {King} Candaules from bed and sent him forth to deliver law to his people. Ready on my lips was persuasion’s tale, the one that forbids a king, the guardian of his people, to sleep the whole night through. And summoners {have gone to call} Gyges to my presence [2]

She told Gyges to either kill Candaules, seize the throne, and marry her, or be himself killed. Since she proposed that Gyges marry her, the queen wasn’t horrified by the act itself of Gyges seeing her naked. Her concern, like concern about men having sex without being subject to forced financial fatherhood, was that Gyges saw her naked without being married to her. Her concern was to uphold the law controlling men’s sexuality.

Another ancient Greek account of Gyges and Candaules similarly concerns control of men’s sexuality. In Plato’s Republic, an ancestor of Gyges acquired a golden ring of invisibility.[3] He then subverted the sexual-political order:

he immediately contrived to be one of the messengers to the king. When he arrived, he committed adultery with the king’s wife and, along with her, set upon the king and killed him. And so he took over the rule. [4]

Plato undoubtedly knew the story of Gyges seeing the queen naked. The implicit story in Plato’s account is that the ancestor of Gyges saw the queen naked, desired her, and seduced her. Control of what men can see is presented as necessary to control men’s sexuality.[5]

Fear of men’s sexuality informs the aphorism about women’s clothing in Herodotus’s story of Gyges and Candaules. According to Herodotus, an ancient Greek reporter-historian, Candaules continually praised the beauty of his wife’s body. He wanted Gyges to know without doubt the truth of that beauty. Candaules thus urged Gyges to contrive to see her naked. Gyges protested:

Master, what a sick word you have spoken, in bidding me to look upon my lady-lord naked! When a woman takes off her clothes, she takes off her modesty. Men of old discovered many fine things, and among them this one, that each should look upon his own, only. Indeed I believe that your wife is the most beautiful of all women, and I beg of you not to demand of me what is unlawful. [6]

Other authors interpreted the saying about a woman taking off her clothes to be about women’s behavior. Writing in the third century of the Roman Empire, Plutarch, a biographer of Greek philosophers, declared:

Herodotus was not right in saying that a woman lays aside her modesty along with her undergarment. On the contrary, a virtuous woman puts on modesty in its stead, and husband and wife bring into their mutual relations the greatest modesty as a token of the greatest love. [7]

Yet Diogenes Laertius, an influential Greek historian writing in the early years of the Roman Empire, presented a much different judgment. To the wife of Pythagoras, a leading Greek thinker who preceded Herodotus by about a century, Diogenes Laertius attributed contrasting advice:

Within the story of Gyges and Candaules, the issue isn’t the behavior of a woman. Gyges and Candaules expected that Candaules’s wife wouldn’t perceive that Gyges viewed her naked. In that context, the aphorism about a woman taking off her clothes must relate to a man illicitly and covertly seeing a woman naked. Plato’s account points to a plausible concern. If a man illicitly and covertly sees a naked woman, he will desire her, seduce her, and overturn the sexual-political order. Gyges was self-conscious of his own potential weakness.

In Herodotus’s story, the queen validated legal control of men’s sexuality. Perceiving that Gyges had seen her naked, she responded with emotionless concern for punishment:

though she was so shamed, she raised no outcry nor let on to have understood, having in mind to take punishment on Candaules. [9]

Delivering her murderous ultimatum to Gyges, she declared:

either he that contrived this must die, or you, who have viewed me naked and done what is not lawful {must die}.

The queen could have sought to have both Gyges and Candaules killed. Such vengeance would have detracted from the structure of Greek law controlling men’s sexuality. In ancient Greek understanding, Candaules being killed is the natural result of Gyges seeing Candaules’s wife naked. If law is to prevent that killing, Gyges must be killed.

Although scarcely recognized, social and legal control of men’s sexuality has been harshly oppressive. Men throughout history have been highly vulnerable to charges of rape. Punishment of men for illicit sex has historically been brutal and even included castration. Criminalizing men seducing women has encompassed behaviors far beyond any reasonable understanding of violent threats and acts. Current “child support” laws force enormously oppressive financial fatherhood on men who explicitly consent to nothing more than consensual sex. Broad trends point to even more oppressive social and legal control of men’s sexuality. That will affect significantly the course of human history.

[1] The saying about a woman taking off her clothes occurs within Herodotus’s story of Gyges and Candaules, Histories 1.8.3-4. For detailed philological analysis of that saying, Cairns (1996). My translation of the saying is consistent with a variety of highly knowledgeable translations.

Herodotus describes the saying as one of the fine things that men of old discovered. Id. 1.8.5. Herodotus wrote his Histories in the mid-fifth century BGC. The saying, and the story of Gyges and Candaules, subsequently becoming a common text in Roman rhetorical schools. Smith (1920). For the relation of the story of Gyges and Candaules to folktale motifs, Cohen (2004).

[2] P.Oxy. XXIII 2382, from Greek trans. Page (1951) p. 3. I’ve made insubstantial changes to lessen the awkwardness of dangling phrases. The text is on a re-used papyrus dating to 200 BGC. An alternative translation:

When the radiant dawn arrived
the courier of the day’s first glimmer,
I woke him and from the bedchamber sent him,
to judge the people’s affairs — I had a plan
worthy of consideration, which would not allow
the king to sleep the entire [night …
[to] Gyges’ herald …

Kotlinska-Toma (2015) p. 127, which also provides the Greek text. The translation “I had a plan / worthy of consideration, which would not allow / the king to sleep the entire {night}” seems to me less plausible than “Persuasion’s tale was ready on my lips, the one that forbids a king, the guardian of his people, to sleep the whole night through.” The latter is the verbatim relevant translated text from Page (1951) p. 3. Page’s translation makes sense in the context of the queen waking the king and sending him out to judge the people’s affairs. It also provides a rationalization for the queen having the king killed. In Kotlinska-Toma’s translation, the queen describes to herself obliquely her plan to have the king killed. That seems inconsistent with the queen’s emotional turmoil and her strong actions.

[3] Plato, The Republic Bk. II, 360a-b. The ancestor of Gyges took the golden ring from the finger of a naked corpse lying inside a hollow bronze horse revealed through a thunderstorm and earthquake. Corpse-stripping in the context of these ominous portents suggests a bad man and ill fortune. Plato’s story seems to paint with ill fortune Gyges’s similar, but externally motivated acts.

[5] Nicolas of Damascus, perhaps conveying a report from the fifth-century historian Xanthus of Lydia, provides another version of the story of Gyges and Candaules. In Nicolas’s version, Gyges goes to fetch the bride of King Adyattes (King Candaules). The bride is Toudo, daughter of Arnossus, king of the Mysians:

Gyges fell in love with Toudo, lost his head, and tried to force his attentions on her. She declined his advances, threatened him, and told all when she reached the king’s presence.

Nicolas of Damascus, FGRHist 90 F 47, from Greek epitomized in Pedley (1972) p. 16 (no. 35). Candaules then resolved to kill Gyges. But with the help of a female slave in love with him, Gyges killed Candaules in his bedchamber before Candaules could kill Gyges. Gyges then became king, married Toudo, and thus made her his queen.

While Nicolas of Damascus’s version of the story of Gyges and Candaules doesn’t involve a man seeing a woman naked, it does involve a man sexually desiring a young woman after seeing her. Seeing her prompts him to attempt to seduce her. Ultimately, his actions overturn the sexual-political order.

In Xenophon’s Cyropaedia 5.1, Cyrus avoids gazing upon a beautiful woman so as not to be induced to neglect his duties. In Greek myth, men illicitly seeing females naked suffered harsh punishments, e.g. Teiresias blinded for seeing Athena naked, Actaeon tore apart by his hounds for seeing Artemis bathing, Erymanthos blinded for seeing Aphrodite having sex with Adonis. Cohen (2004) Appendix.

[6] Herodotus, Histories 1.8, from Greek trans. adapted from Grene (1987) p. 36. Other translations of the story of Gyges and Candaules (including the above quote) are available here and here.

For among the Lydians and indeed among the generality of the barbarians, for even a man to be seen naked is an occasion of great shame.

1.10.3, trans. id. In Greece, men were commonly naked in public baths and gymnasiums. The queen responds to being seen naked not with passion, but with a rational plan consistent with the law controlling men’s sexuality.

In Herodotus’s Histories, the Persians are generally associated with externalized values — countable objects. Internal values of honor, shame, and culture drive the Greeks. Konstan (1987). Yet men illicitly seeing naked women seems for the Greeks to be primarily a rational matter of maintaining the visual-political order.