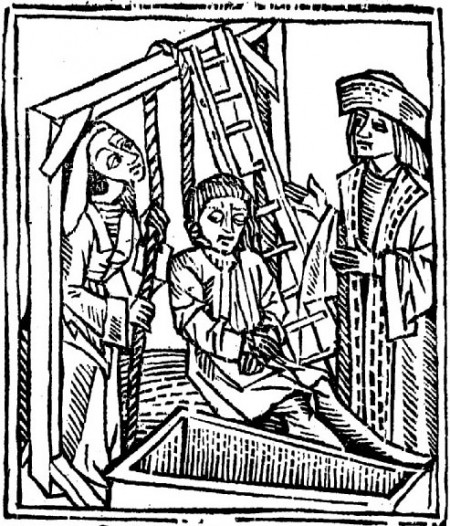 Combining sex, crime, and outrage, the widow of Ephesus story has been at the sweet spot of communicative attention for at least two millennia. The widow of Ephesus mourned her husband in continual vigil at his grave. One day, she encountered there a soldier. He had been given responsibility for guarding the dead bodies of criminals hanging crucified. The widow and the soldier fell in love. They began having sex in her husband’s sepulcher. While the soldier was engaged with the widow, someone stole a criminal’s body from a cross. The soldier faced charges of neglect of duty. The widow rescued the soldier by having her husband’s body raised on the cross to replace the lost body of the criminal. Like rape and poisoning on a college campus, this sort of story makes news.

Among fables attributed to Phaedrus from about two millennia ago, the widow of Ephesus story warned of the madness of carnal passion. The Phaedrus retelling described the soldier falling madly in love after a glimpse of the widow within her husband’s sepulcher:

The soldier espied through the slightly open
Door a lady, a dream of loveliness.
Immediately, the man became madly enamored,
Possessed by a passion impossible to control. [1]

When the soldier found a criminal’s body missing, he was fearful and despondent. The widow, his lover, responded calmly and dispassionately:

And this paragon of wives said, “There’s one way
To save you. Don’t be afraid.” And she gave him
Her husband’s corpse to hoist on the cross,
So rescuing him from the penalty due for his default.

The fable of the widow of Ephesus ends with an epimythium describing moral disorder:

Rather than continuing her praiseworthy grieving for her husband, the widow of Ephesus entered a dishonorable relationship with the soldier and treated her husband’s body dishonorably.

In Lamentationes Matheoluli, a thirteenth-century masterpiece of men’s sexed protest, Matheolus’s anger at his abusive wife strongly colored his retelling of the widow of Ephesus story. In Matheolus’s version, a knight merely offered the widow words of consolation within the philosophical tradition of consolation.[3] After the criminal’s body had been stolen, the widow propositioned the desperate knight. She offered to rescue him in exchange for his promising to marry her. The knight agreed. The widow then dragged her husband’s corpse from the grave and hung it on the cross. When the knight pointed out that her husband’s head lacked the two wounds that were on the criminal’s head, the wife bashed her husband’s head to create similar wounds. The knight, outraged, reneged on his promise to marry the widow. He declared:

I’d rather lose my skin than be married to you. For what you did, in justice, you deserve to be burned. [4]

In the Satyricon, probably from the first century, the widow of Ephesus story is sophisticated literary entertainment. The soldier in the Satyricon version seduced the widow. Facing charges for neglect of duty, he prepared to commit suicide:

But the woman’s sense of pity matched her chastity. “The gods must not allow me,” she said, “to gaze on the two corpses of the men I hold most dear. I would rather surrender the dead than slay the living. She followed up this declaration with an instruction to remove her husband’s corpse from the coffin, and to have it fastened to the vacant cross. The soldier took advantage of the ingenious idea of this most thoughtful of women, and the next day the locals speculated on how a dead man had managed to mount the cross. [5]

To appreciate the sophistication, consider carefully: “the widow’s sense of pity matched her chastity.” The widow lacked chastity. She similarly lacked pity for her husband’s dead body. But is pity relevant to a dead body? The widow had pity on the soldier facing punishment for dereliction. That’s meaningful pity. The claim that the widow’s pity matched her chastity has multiple levels of irony.

The ending of the story is also ironic. The locals, speculating on how a dead man had mounted the cross, apparently recognized the body of the widow’s husband. That means the corpse substitution failed to obscure the soldier’s dereliction. The “ingenious idea of this most thoughtful of women” appears laughably foolish. A stolen, crucified body leading to a miraculous mounting of a cross also suggests parody of the Christian gospel:

Those who passed by derided him, shaking their heads and saying, “… come down from the cross.” … {after Jesus’s death and burial} some of the guard went into the city and told the chief priests everything that had happened. After the priests had assembled with the elders, they devised a plan to give a large sum of money to the soldiers, telling them, “You must say, ‘His disciples came by night and stole him away while we were asleep.’ If this comes to the governor’s ears, we will satisfy him and keep you out of trouble.” [6]

The widow of Ephesus story in the Satyricon emphasizes public spectacle. The story itself is a virtuoso display of rhetorical skill.

The widow of Ephesus story shows the imperatives of the living trumping respect for the dead. The exacting science of philology works to provide accurate transmission and understanding of texts. Philology deserves respect. Yet philology isn’t sufficient for lively humanities. Retelling stories in one’s own interests propagates life in literature.[7]

[1] Phaedrus, “The Widow and the Soldier,” Perotti’s Appendix, No. 15, from Latin trans. Widdows (1992) pp. 151. The subsequent quote is from id., p. 152. Here’s the Latin text with an alternate prose translation into English. Konstan (2015) documents that in ancient Greece, beauty (kállos) was associated with sexual desire.

[7] Other retellings of the widow of Ephesus story have survived. Moretti (2013) interprets the story of Drusiana in the Apocryphal Acts of the apostle John as a response to stories like that of the widow of Ephesus. Hrotsvit drew on the story of Drusiana for her work Drusiana and Calimachus. The fabliau Celle qui se fist foutre sur la fosse de son mari (La femme au tombeau) is a variant of the seduction portion of the widow of Ephesus story. Ibn Zabara included a variant in the Book of Delight, written in Hebrew about 1200. For an English translation, Abrahams (1894) pp. 516-7. More generally, the story is Arne-Thompson type 1510 and motif K2213.1 in the Stith-Thompson categorization. For other related stories, see D.L. Ashliman, “Widows in (short-lived) mourning.”

A collection of Aesop’s fables put into Latin elegiac verses by Gualterus Anglicus {Walter of England} in the second half of the twelfth century includes a version of the tale of the widow of Ephesus. This version ends with a strong, general statement of men’s sexed protest:

Gualterus Anglicus, De viro et uxore {Of the husband and wife}, Fable 48, Latin text from Aesopica, English trans. Pepin (1999) p. 204. Since Gualterus Anglicus’s Aesop collection became one of the Auctores octo {Eight authors} of the medieval school curriculum, it was widely disseminated and read in the late Middle Ages.

One thought on “widow of Ephesus story in three retellings”