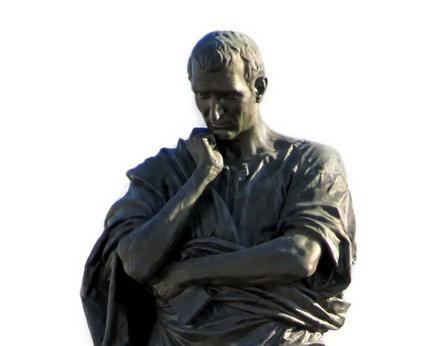 The literary genius Ovid instructed men about the folly of being sexually desperate for a woman. Many men failed to learn what Ovid taught. In Old Saxony about the year 960, Hrotsvit of Gandersheim, a noble, learned, and compassionate nun, buttressed Ovid’s teaching with new exempla. Hrotsvit instructed men in love with a sparkling play about Calimachus and Drusiana. Hrotsvit, a supersubtle author, obscures in her prefaces both the extent of her classical interests and her loving concern for men’s weakness and hardships.[1]

Hrotsvit’s Calimachus models the lover in Roman love elegy. The play begins with Calimachus telling his friends that he loves Lord Andronicus’ wife Drusiana. Calimachus tells his friend this natural, passionate yearning through progressively refined answers in a comically prolix dialogue. Calimachus declares his determination to make her fall in love with him. His friends caution about the difficulty of that task. They note that Drusiana through religious devotion has ceased to sleep with her husband. Calimachus, lacking Ovidian learning, speaks and understands only crude straight-forwardness:

Calimachus {to his friends}: I have sought your consolation, / but you drive me to desperation.

Friends: He who pretends, deceives; and he who flatters, sells truth.

Calimachus: Since you refuse me your help, I’ll go to her myself and try to seduce her with love blandishments.

Friends: You will fail entirely. [2]

Calimachus refers to the examples of many daring lovers. Ovidian daring is the making of pretenses, deceptions, and illusions. Offering desperate love blandishments, in contrast, characterizes the conventional elegiac poet.

Calimachus attempts to seduce Drusiana without any seductive art. He opens: “I would like to speak with you, Drusiana, love of my heart.” Men love beautiful women. Calimachus tells Drusiana that her beauty compels him to love her. This approach naturally leads to Drusiana’s response: “I feel no reaction except for disgust.” Calimachus brings his seductive failure to a climax with an unself-conscious self-mocking vow to Drusiana:

By God I swear: if you don’t yield to me, I will not rest, / I will not desist from pursuing my quest / until I entrap you with clever guiles.

Drusiana is the antithesis of the cruel beloved of conventional Roman elegy. To her womanly self-dramatization and her power to impose her own passionate imagination is added extraordinary Christian concern for Calimachus:

Alas, my Lord Jesus Christ, what is the good of the vow of chastity I swore / if this madman is crazed on my beauty’s score? / Oh, Lord, look upon my fear, / look upon the pain I bear! / I don’t know what to do; if I denounce him, there will be public scandal on my account, I’m afraid; / if I keep it secret, I cannot avoid falling into these devilish snare without Thy aid. / Help me, O Christ, therefore, with my plan / and permit me to die so that I won’t become the ruin of that charming young man.[3]

Calimachus’ subsequent actions show that he lacks both charm and Christian virtue. Apparently suffering from extraordinary oneitis, Calimachus goes to Drusiana’s tomb. To gain access to her dead body, he bribes the tomb guard Fortunatus. Before Calimachus can engage in sexual intercourse with Drusiana’s dead body, a snake kills both Fortunatus and him. A snake is a Christian symbol of seduction. Having a snake kill Calimachus while he pursues necrophilia comically emphasizes his seductive failure.

Resurrected through the grace of God, Calimachus subsequently makes clear that his Christian fault is much broader than his failure in the ways of love. Calimachus acknowledges his madness and his will to necrophilia. He nonetheless blames for his sin “Fortunatus’ fraudulent guile.” Calimachus declares that Fortunatus was “the kindler of my evil, the inspiration of my sin.” Calimachus’ claims are crude lies. Calimachus compounds his gross falsity by arguing against mercy for Fortunatus:

Apostle of Christ, do not deem that traitor, that evildoer, worthy of regaining his breath / of absolving him from the chains of death, / him who deceived me, who seduced me, who prompted me to attempt that horrible deed!

Calimachus, far from being a “charming young man,” shows contempt for truth and mercy. Hrotsvit had keen insight into human passion and greatly appreciated men. She positions Calimachus as a woman betraying Christian mercy in blaming her lover for desired sexual seduction.

Living in myth, men in Hrotsvit’s works are vulnerable to love madness. Drusiana’s husband describes Calimachus as a “madman,” “blinded by carnal desire.” In Hrotsvit’s Basilius, the servant is possessed by the unholy god Amor:

So sharply was the unhappy wretch pricked by the arrows of love, that the more his infatuation increased, the more did he languish.[4]

Hirena: Look, the fool, the madman base / he thinks he is enjoying our embrace./

Agape: What is he doing?

Hirena: Into his lap he pulls the {kitchen} utensils, / he embraces the pots and pans, giving them tender kisses. /

The virgins describe Dulcitius as possessed by the Devil. Just after the virgins are presented to him as captives, Dulcitius declares, “I am captivated by their beauty.”[6] Hrotsvit, with appreciation for Ovid, understood that eros can dominate and transform men not dedicated to the true god.

[1] Dronke (1984), p. 83, refers to Hrotsvit as a “supersubtle” literary genius. Hrotsvit herself addresses the issue of subtlety in The Resurrection of Drusiana and Calimachus. In that work, Saint John says:

With what exact discernment the Supreme Judge weights all that is done, and how equitably He balances the merits of every one, is not obvious to man nor can it be easily explained / because the subtlety of the Divine Judge far surpasses the human brain.

Andronicus: Alas, my Lord, I am weary of my life./

John: What happened to you, what strife./

John: Did she expire?/

A more passionately attached husband probably would have said “Drusiana, my wife” rather than “Drusiana, your disciple.” In addition, Andronicus first requests of Saint John the resurrection of Calimachus, not Drusiana.

[5] Hrotsvit of Gandersheim, The Martyrdom of the Holy Virgins Agape, Chionia, and Hirena, from Latin trans. Wilson (1998) p. 48.

[6] Hrotsvit forthrightly recognizes that women’s beauty is highly significant to men. In her play The Martyrdom of the Holy Virgins Fides, Spes, and Karitas, Hadrian, upon seeing these virgins, declares, “The beauty of every one of them stuns my senses.” Trans. Wilson (1998) p. 83.