Before the scientific advances of sexual selection field reports, men in love lived in ignorant self-abasement.  Many men still do.[1]  Empirical science alone cannot produce loving enlightenment.  To move beyond the dark ages of chivalric self-abasement, men must understand the stories of William, Nastagio, and Federigo.

William, said to be a bright, young man, desired his master’s wife.  She was beautiful:

She was exceeding beautiful.
The wild flowers blooming on the hill,
The lily flower, the rose of May —
She was more beautiful than they.

The narrator, undoubtedly like William, let her bodily beauty lead to where a beautiful women’s beauty naturally leads men:

For when her hair was left untied,
It shone so bright that anyone
Who saw would swear that it was spun
From purest gold.  Her forehead shone
Like finely cut and polished stone,
Her eyebrows brown and widely spread,
Her eyes were laughing in her head,
…
{continuing down through nose, mouth, chin, throat}
Her breast were round as little apples,
Firm and small with little nipples,
There’s nothing more for me to say:
To lead men’s hearts and minds astray [2]

Men who aspire to be more than beasts understand and respect their own sexuality.  Appreciating a young, beautiful woman’s physical attractiveness doesn’t require a man to be subjugated by it.

William was both stupid and timid.  He stayed in his beloved’s household for seven years, pining away in love for her, never saying a word to her.  Finally he accosted her:

William looked long and longingly
Upon her, then he said, “Hello.”

No, no, no.  “Lady, go make me a sandwich” would have been better.  Even worse, William then deployed a stock tactic of a lovestruck adolescent:

Lady, I beg of you, pay heed
To what I ask of you.  I need
Your counsel.  Tell me what you’d say ….”
— “Of course I’ll give it.  Ask away.”
— “If clerk, or knight of high degree,
Or someone from the bourgeoisie
Should fall in love — or even a squire —
…
What would your opinion be
If he has loved her seven years
And kept it hidden and he fears
Still to tell her anything —
What martyrdom he’s suffering —
And yet he still could tell his love
If only he were brave enough
And the occasion would appear
To open up his heart to her,
And what I really wish I knew
Is what you think he ought to do
And whether he does right or wrong
To keep his love from her so long.”

She declared that the hypothetical lover should bravely tell his love.  She also said of the beloved:

She’d have to pity the poor man.
It would be very foolish of her
Not to accept the love he’s offered
And one day wish to God she had. [3]

William moaned and sighed and then said, “Lady, behold the man.”[4] The lady asked if he were joking and then told him to shut up and get out.  The lady was false to her counsel.  She was true to human nature.  Women naturally don’t desire sexually pathetic men.

Kill me and get it over with.
Listen, I asked for your love.
I beg a gift, and I will prove
My need for it.  I will not eat
Until the day that you see fit. [5]

Since pathetically abasing himself didn’t work to stir the lady’s love, William resolved to abase himself even further.  He refused to eat until the lady acknowledged his love.  That’s not a rational response to the lesson of experience.  Only within the conventions of chivalric fiction is such a tactic ever successful.  So it was here.  The lady and his master implored William to eat.  Without acknowledgement of his love, William resolutely refused to eat, sweating and trembling, with every limb filled with pain, potentially facing death at the hand of his master for desiring his wife should she acknowledge his love.  His suffering and bravery stirred the lady’s sexual desire. 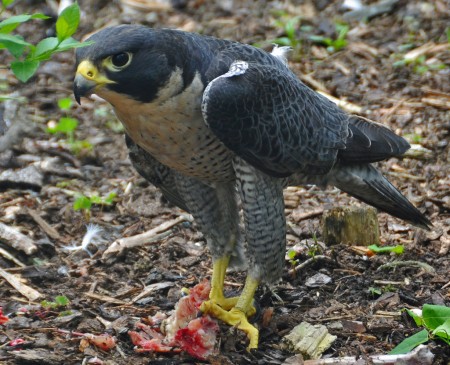 Boccaccio, who was keenly concerned about men in love, seems to have responded to William of the Falcon with two adjacent stories in the Decameron.  In Decameron 5.8, Nastagio degli Onesti nearly squandered his fortune unsuccessfully seeking the love of a beautiful, young woman.  At times Nastagio was so filled with despair about his unrequited love that he wanted to commit suicide.  Lost in a pine forest, Nastagio had a Dantesque vision of a beautiful, young women, completely naked, running from two ferocious dogs and a knight.  Nastagio intervened to defend the woman.  The knight explained that both he and the woman were spirits undergoing God-ordained punishments:

I, who once loved her so dearly, was to pursue her as my mortal enemy rather than the woman I once loved.  And every time I catch up to her, I kill her with this same sword with which I slew myself {in love suicide}. Then I rip open her back, and as you are about to see for yourself, I tear from her body that cold, hard heart of hers, which neither love nor pity could ever penetrate, and together with the rest of her inner organs, I give it to these dogs to eat.  In a short space of time, as the justice and power of God ordain, she rises up as if she never died and begins her woeful flight all over again, with the dogs and me in pursuit. [6]

Nastagio, although full of pity and fear from the vision, realized that it could be useful to him.  He arranged to have the woman he loved see the vision.  Realizing the lady’s words to William in William of the Falcon, the lady in Boccaccio’s story understood:

She’d have to pity the poor man.
It would be very foolish of her
Not to accept the love he’s offered
And one day wish to God she had. [7]

She thus agreed to marry Nastagio.  They lived happily ever after.  In William of the Falcon, the bravery of a man enduring extreme, self-imposed suffering stirred the lady to sexual desire.  In Boccaccio’s more humane story, the lady’s vision of her own future suffering from rejecting a man’s love stirred her to accept his love.

In the subsequent story in the Decameron, the man in love gives up his falcon but gets the false cunt.  Filomena, who narrates this story, declares that it “partly resembles the preceding one.”  Like Nastagio, Federigo was a rich young man profligately and futilely courting a beautiful woman.  Federigo was in love with Monna Giovanna, who was married to a rich man.  Federigo’s courtship left him with nothing but a falcon:

As Federigo continued to spend money well beyond his means, while acquiring nothing from his lady in return, he went through his entire fortune, as can easily happen, and wound up a poor man, left with nothing except a tiny little farm, the income from which was just enough for him to live very frugally, and a single falcon, which was among the finest in the world. … There he would go hunting with his falcon, whenever he could, and without asking assistance from anyone, he bore his poverty with patience. [8]

Monna Giovanna’s husband died.  While spending the summer at their country estate, her son became acquainted with Federigo and his falcon.  The boy happened to fall ill.  He told his mother that he would get better if she would get for him Federigo’s falcon.  Monna Giovanna had never paid any attention to Federigo’s love for her.  But now that she needed a falcon, she decided to visit him personally, invite herself to have dinner with him, and ask him for his falcon.

Federigo responded to Monna Giovanna’s visit with self-abasement and extravagance.  Surprised and delighted by her visit and her self-invitation to dinner, Federigo wanted to “honor the noble lady” with a worthy meal.  But he had nothing suitable, except for his falcon.  He cooked his falcon and served it as dinner for the lady.  That extravagant charity is as false to reason and nature as the rich lady’s surprise visit and self-invitation to dinner at her spurned lover’s poor home.  It’s as false to reason and nature as the son’s claim that getting Federigo’s falcon would cure his illness.

The story ends with intimations of falsity.  Having failed to acquire Federigo’s falcon other than as a piece of dead, cooked meat, Monna Giovanna returned “utterly despondent” to her son.  Her son then died.  That actually was in Monna Giovanna’s material interests, for when her rich husband died:

he left his entire estate to his son, who was still a growing boy, and since he also loved his wife very dearly, he made her his heir in the case that he son would die without lawful issue. [9]

Monna Giovanna wanted to remain a rich widow.  But her brothers pressured her to remarry.  Mona Giovanna recalled “Federigo’s great worth and his last act of generosity, that is his having killed such a splendid falcon in her honor.”  She might more realistically have recalled Federigo as a foolish, self-abasing man who had caused her utter despair.  Monna Giovanna and Federigo married.  Federigo reportedly lived happily ever after:

Federigo, finding himself not just married to the great lady he had loved so dearly, but a very rich man to boot {through his share in Monna Giovanna’s inherited wealth}, managed his fortune more prudently than he had before and lived with her happily to the end of his days. [10]

A profligate man doesn’t plausibly become prudent by marrying a rich widow.  Monna Giovanna treated Federigo selfishly and instrumentally.  Read against William of the Falcon, Monna Giovanna seems like the false cunt, and Federigo, the foolish, self-abasing man.  That doesn’t suggest a happy end for Federigo.

[1] Societies have always required men to sacrifice their lives in group-structured men-on-men violence (war).  That discourse colonizes men’s personal lives.  Men come to believe that they must desperately fight for love, rather than be loved for who they are.

[4] Cf. John 19:5. That parallel suggests that William feels he isn’t guilty of any offense.  He is guilty of fearing to give offense.

[10] Id. p. 458. The Bustan of Saadi (written in Persian in 1257) includes a story with some similar features.  The Sultan of Turkey decides to ask Hatim Tai, an Arab renowned for generosity, for his fabulous horse.  But before the messenger conveyed the Sultan of Turkey’s request, Hatim slaughtered his horse because it was all he had to provide a meal for the messenger.  Trans. Edwards (1911) Ch. II (Concerning Benevolence), “Story of Hatim Taei.”  The additional context of courtly love in the Decameron‘s story of Federigo degli Alberighi highlights the sexed structure of self-abasement in generosity.