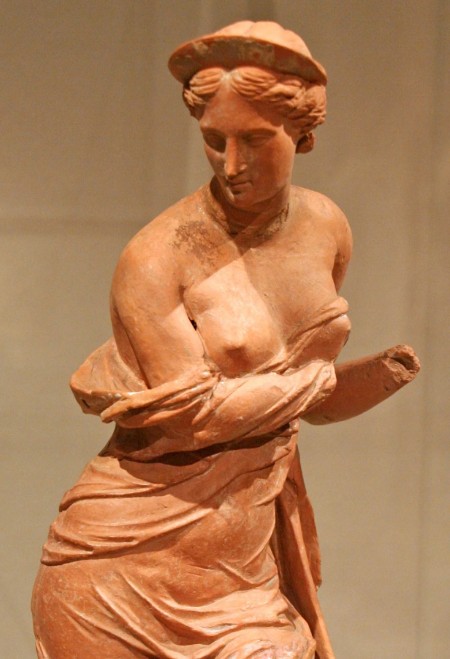 Saint Pelagia, the leading actress-dancer of Antioch, rode by Bishop Nonnus and other bishops.  Bare of head, shoulder, and limb, she was wearing only gold, pearls and precious stones.  She smelled of sweet perfume.  Accompanying her was a train of sumptuously dressed young men and women.  The other bishops groaned and turned their heads away.  But Nonnus did not:

the most blessed Nonnus did long and most intently regard her: and after she had passed by still he gazed and still his eyes went after her.  Then, turning his head, he looked upon the bishops sitting round him.  “Did not,” said he, “the sight of her great beauty delight you?” [1]

Nonnus perceived a guide to holiness within men’s typical response to a beautiful woman.  After the other bishops refused twice to answer his question about Pelagia’s beauty, Nonnus declared:

it greatly delighted me, and well pleased was I with her beauty. God shall set her in presence of His high and terrible seat, in judgment of ourselves and our episcopate. [2]

He explained that Pelagia made herself beautiful for men who loved her for only one night.  He grieved that he and his fellow bishops made much less effort to make their souls beautiful for God, the Immortal Lover.  Nonnus’s natural response to Pelagia’s beauty thus provided instruction in loving God.

The holy bishop Nonnos {Nonnus}, however, observed her carefully in his mind, filled with wonder.  Once she had passed in front of them, he turned away his face, placed his head between his knees, and wept with great feeling, so much that his lap was filled with tears.

Lamenting greatly for her, the holy bishop Nonnos sighed and said to his fellow bishops, “To be honest, fathers, did not the beauty of this prostitute who passed in front of us astonish you?”  They kept silent and did not answer a word. [3]

Even the most pious Christian reader would likely snort in derision at this response to a beautiful women: Nonnus “observed her carefully in his mind, filled with wonder” and then, after she passed, wept “with great feeling.”  Then, without any plausible motivation, Nonnus combined “beauty,” “prostitute,” and “astonish” into an emotionally incoherent question for his fellow bishops.  The narrative subsequently turns even further away from men’s real human nature:

Having wept a great deal, he said to his fellow bishops, “I beg you, my brothers, tell me, did you lust in your minds after the beauty of that prostitute who passed in front of us?  And did you suffer for her?  I myself was greatly astonished at her beauty and I suffered because of her ornaments, which were a baited snare for all who beheld her, a stumbling block leading to perdition.  In my weakness I beseech and supplicate God to turn her to a life of truth and to let her stand chastely before the awful throne of his majesty. [4]

Confronted with men’s distinctive human nature, remaining silent or shifting focus to women devalues men.  The shocking honesty of Nonnus in the Latin version of the Life of Saint Pelagia the Harlot is not just good, ancient, literary art.  It’s inspiration for women and men to appreciate men’s human nature more fully and joyfully today.

[1] From the Latin version (in Vitae Patrum) of The Life of Saint Pelagia the Harlot, trans. Waddell (1936) p. 269.  Until otherwise noted, subsequent quotes are from id.  Here’s an alternate online translation.  John Chrysostom, writing in Greek probably late in the fourth century, described a harlot woman-of-the-stage who became a model of godliness (Homily LXVII).  That may have been the kernel of the life of Pelagia.  In any case, the original of the Life of Saint Pelagia was in Greek, probably from a mid-fifth-century Syro-Palestinian milieu.  The Life of Pelagia was highly popular in medieval Europe.  At least 31 Greek manuscripts of the Life, dating from the tenth to the seventeenth centuries, have survived.  Among 175 surviving Latin manuscripts of the Life, a word-for-word Latin translation of what’s thought to be the original Greek text has survived in a twelfth/thirteenth-century Italian manuscript.  Medieval versions of the Life exists in a wide variety of languages, including Arabic, Armenian, Georgian, Slavonic, and Syriac.  On the manuscript history of the Life, see Petitmengin (1984).

[2]  While Pelagia’s beauty delighted Nonnus, the Life also depicts Nonnus as recognizing the problem of temptation.  After receiving a letter from Pelagia asking to meet with him, Nonnus wrote her:

seek not to tempt my weakness, for I am a man that is a sinner, serving God.  If in very deed thou hast a desire after divine things and a longing for goodness and faith, and dost wish to see me, there are other bishops with me: come, and thou shalt see me in their presence: for thou shalt not see me alone.

[4] Within this text are added references to Matthew 5:28 (“everyone who looks at a woman with lust has already committed adultery with her in his heart”) and the biblical figure of a “stumbling block,” e.g. Ezekiel 14:4.  In the Latin version, Nonnus’s delight in Pelagia’s great beauty is not necessarily equivalent to lust in its scriptural context of hyperbolic amplification.  Pelagia’s great beauty explicitly functions for Nonnus not as a stumbling block but as a sign for spiritual adornment.

Waddell, Helen. 1936. The desert fathers; translations from the Latin with an introduction. London: Constable.