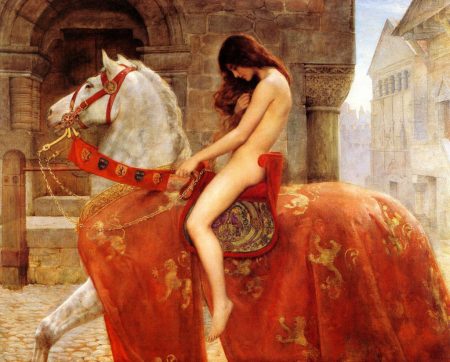 In ancient Greece, men’s sexuality was much more harshly regulated than women’s sexuality was. Today, in most jurisdictions, men have no reproductive rights whatsoever. Moreover, totalitarian laws attempt to suppress reproductive coercion in conjunction with strong, formal legal support for women’s reproductive choice. Rather than addressing such grotesque gender inequalities, scholars serving dominant ideology have constructed baroque theories of the male gaze oppressing women. The development of the popular legend of Lady Godiva and Peeping Tom from the Middle Ages to the present illustrates the gender bias that disparages, devalues, and criminalizes men’s sexuality.

The historical Lady Godiva was a wealthy, powerful woman who died in Coventry in 1067. Her name was Godgifu in the Anglo-Saxon England of her birth. She was a devout Christian who greatly venerated Mary, the mother of Jesus. After being the widow of an earl, she married another earl, Earl Leofric of Mercia. Godgifu held a large amount of land in her own name. In particular, she owned the land of the small farming village of Coventry. The sixty-nine men peasants in Coventry were completely subservient to the wealthy, aristocratic woman Godgifu. She determined how much goods and/or money her peasants were required to deliver regularly to her household.[1] Godgifu had a position of extraordinary social privilege relative to almost all men throughout the world.

Gynocentric society constructs women as both vulnerable damsels and strong, independent heroes. That sort of myth-making occurred with respect to Godgifu no later than 1236. According to the chronicler Roger of Wendover, who died in 1236, Godgifu was a hero who saved Coventry’s peasants from her husband’s oppressive taxation. Roger anachronistically called Godgifu “the noble countess Godiva.” Here’s Roger’s account:

Leofric, Earl of Chester, a man of praiseworthy life, died on the thirty-first of August in the same year {1057}. He was buried in the monastery which he had founded at Coventry. Having founded this monastery by the advice of his wife the noble countess Godiva, at the prayer of a religious woman he placed monks within it. He so enriched them with lands, woods, and ornaments, that in all England there wasn’t a monastery with such abundance of gold, silver, gems, and costly garments.

The countess Godiva, a great lover of God’s mother, longed to free the town of Coventry from the oppression of a heavy toll. Often with urgent prayers she begged her husband that, with honor to Jesus Christ and his mother, he would free the town from this toll and all other heavy burdens. The earl sharply rebuked her for foolishly asking what was so much to his disadvantage. He forbade her ever again to speak to him on the subject. She, on the other hand, with a woman’s pertinacity, never ceased to exasperate her husband on that matter.

He at last responded,  “Mount your horse and ride naked before all the people, through the market of the town, from one end to the other. On your return, you shall have your request.” Godiva replied, “But will you give me permission, if I am willing to do it?” “I will,” said he.

The countess, beloved of God, then loosened her hair and let down her tresses. Her hair covered her whole body like a veil. Then she mounted her horse. Attended by two knights, she rode through the market-place, without being seen, except for her beautiful white legs.

Having completed her journey, she returned with gladness to her astonished husband. She obtained from him what she had asked: Earl Leofric freed the town of Coventry and its inhabitants from the toll. He confirmed that action by a charter. Earl Leofric, also at the instigation of his countess, munificently enriched with lands, buildings, and various ornaments the churches of Worcester, St. Mary of Stone, and St. Wereburg, along with the monasteries of Evesham, Wenloc, and Lenton. [2]

Like recent claims about violence against women, the myth of Lady Godiva rests on falsehoods. Since she herself owned the land of Coventry, Godiva didn’t need her husband’s permission to abolish rents on peasants living there. Moreover, she didn’t need her husband’s permission to ride naked through the town, just as she wouldn’t need her husband’s permission to have sex with another man. Roger’s account insistently credits Godiva and other women for whatever good deeds Leofric did. Wives today are also commonly credited for their husbands’ achievements. (“I owe all my success to my wonderful wife.” Audience nods and claps approvingly.) On the other hand, the husband is socially constructed as a villain, without any credit to women for his viciousness. In short, the myth of Lady Godiva displays characteristic features of gynocentric social constructions.

In Roger of Wendover’s early version of the myth, the two knights who escorted Godiva surely saw her, as did all who looked on her and saw only her beautiful white legs.[3] Repression of men’s gaze was a latter development. The Peeping Tom figure in the Lady Godiva myth apparently dates from the mid-seventeenth century. An account from 1723 presents Godiva as a tyrant like present-day administrators of college sex codes:

{Godiva commanded} all persons to keep within doors and from their windows, on pain of death. Notwithstanding this severe penalty, there was one, who could not forbear giving a look, out of curiosity, but it cost him his life. In memory of this event, there is a statue of a man, looking out of a window, always kept in a certain house of Coventry. [4]

Later accounts of Peeping Tom’s crime omit Godiva imposing a death penalty on anyone looking at her while she rode naked through town. These accounts claim that Peeping Tom died without any earthly cause, or similarly became blind. One eighteenth-century account suggests that the villagers rallied in support of their naked woman overlord and blinded Peeping Tom.[5] That’s about as humane as current practices of incarcerating men too poor to pay government-imposed sex taxes (“child support obligations”).

In support of the dominant gynocentric order, a nineteenth-century English lord wrote a poem celebrating Godiva. The lord’s poem naturalized brutal punishment of Peeping Tom for his crime of looking at a naked woman riding through town. Baron Alfred Lord Tennyson, Poet Laureate of Great Britain and Ireland under Queen Victoria, imagined:

And one low churl, compact of thankless earth,
The fatal byword of all years to come,
Boring a little auger-hole in fear,
Peep’d – but his eyes, before they had their will,
Were shrivell’d into darkness in his head,
And dropt before him. So the Powers, who wait
On noble deeds, cancell’d a sense misused [6]

No one today would write such poetry about a young man who kissed a woman without first asking for affirmative consent. Instead, college bureaucrat would conduct a show trial and then summarily kick him out of college.

Gynocentric society strongly controls what men can licitly see and say. Claims about crimes of the male gaze and verbal violence against women are social constructions much like the myth of Lady Godiva and Peeping Tom.[7] Peasant men must confront their overlords and insist on their liberty of sight and speech, even in relation to women.

[1] Godgifu’s death is dated September 10, 1067 in the thirteenth-century statute book for Coventry Priory. French (1992) p. 4. According to the Liber Eliensis, a chronicle written in the 1170s, Godgifu was the widow of an earl before she married Earl Leofric. Fairweather (2005) p. 177. On Godgifu’s possessions and authority in Coventry, Donoghue (2003) pp. 37-8. Id. p. 22 notes that women commonly held the key to the household chest for valuables and money.

[2] Entry for the year 1057, from Latin trans. Giles (1849) vol. 1, pp. 314-5. I’ve modernized the English and non-substantially adapted it for readability. I’ve also made a correction based on the Latin. In Anglo-Saxon England, the wife of an earl would not be called a countess. Charters referred to Godgifu as “the earl’s wife Godgifu” and “his bed-partner.” Donoghue (2003) p. 16.

[3] Hartland observes with respect to Roger of Wendover’s version, “Peeping Tom is an impossibility in this version of the tale.” Hartland (1890) p. 217.

one, whose name has not survived, looked forth upon her, and was stricken blind, as some affirm, by the vengeance of Heaven; or, according to others, was deprived of sight by the inhabitants.

Rede appended to his article a long doggerel poem in which the Peeping Tom figure proclaims his life-long love for Lady Godiva. One stanza:

I cannot rend thee from my dying thought,
So closely art thou with my being wrought,
That life and dreams of thee must ebb away,
But when my soul has flown and I am clay.

[7] The scholarly literature lacks critical awareness of men’s social position and merely echoes dominant ideology. French (1992) is a resolutely gynocentric study of the sort that gynocentric academia values highly. In service to dominant ideology, Donoghue (2003) displays what academics regard as impressive cant:

The Godiva legend is about many things, but it always concerns the dynamics of the voyeuristic gaze — its eroticism, the position of the woman’s body in a public space, and the transgressive nature of the gazing.

Id. p. 127. Donoghue follows authorities who reduce all of cinema to the male gaze:

Film criticism has shown that the medium functions through the imposition of the same male gaze articulated by the Godiva legend. … The perspective of the viewer, the position of the idealized woman’s body in a contrived public space, and other affinities between the medium of cinema and the plot of the legend have made the film adaptations more than just a retelling of a quaint medieval story. … In the most general sense, the medium constructs the perspective of the film viewer as voyeur and idealizes the display of a woman’s body as the object of the gaze. The construction is not a function of any particular film or even the aggregate of all, but rather of the medium itself. Any legend would have trouble competing against such a powerful and ubiquitous institution. The cultural work the legend once did on a modest scale is now overwhelmed by the very medium of a world-wide industry.

Id. pp. 6, 127. The world-wide industry most relevant to the Godiva legend is better understood to be the prison-industrial complex. Men are vastly disproportionately imprisoned. In the U.S., imprisonment has grown to extraordinary relevance with an utterly broken criminal justice system. Demonization and criminalization of men is the most relevant context for understanding the development of the myth of Lady Godiva and Peeping Tom.

Draeger (2011) shows the effects on moral practice of uncritical reception of the myth of Lady Godiva and Peeping Tom. In the mode of a teacher in the Jim Crow South counseling blacks not to be uppity, Draeger explains:

male looks evoke a troubling history and men need to know that looking is often synonymous with the devaluing of women even when they are not intended that way. … Gender asymmetries accelerate the troublesome nature of such looks because they tap into attitudes that devalue woman. … Gazing into a woman’s eyes is appropriate, while talking to her chest typically is not. Conventional norms vary, but showing respect for others requires properly navigating them. Some women might welcome lewd looks and might even be disappointed if they are not forthcoming.

Id. pp. 47-8. Such practical advice shows no awareness of the historical injustices of criminalizing men seducing women and the continuing effects of anti-men criminal bias today.

Fairweather, Janet, trans. 2005. Liber Eliensis: a history of the Isle of Ely from the seventh century to the twelfth. Woodbridge: Boydell.

Giles, J.A., trans. 1849. Roger of Wendover’s Flowers of history, Comprising the history of England from the descent of the Saxons to A.D. 1235; formerly ascribed to Matthew Paris. London: H.G. Bohn. (Latin text).