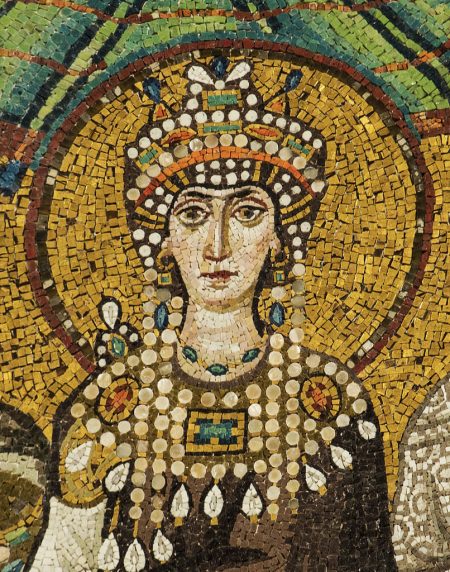 The King was away on business, fighting enemies abroad. His eunuch counselors wrote to him:

The lamentations, the suffering, the agony, the bewilderment, the restless petulance, and the terrible anxiety which you saw in our queen and mistress are at an end. They have settled, receded and passed away. Now come days of joy and happiness. Tears have stopped, grief is banished, and in their place come ease and freedom.

What seemed to have cheered Queen Chrysorroi was solitude in a curtained pavilion in the royal garden. In fact, what cured her misery was trysts with a laborer, an assistant gardener:

There she found the laborer and she played with him. He alone had won the queen’s love and they embraced with frequent kisses. The garden became the bridal chamber of Aphrodite, the mirror of the Graces and the dwelling place of Love. They spent the day in much happiness. The night returned with all its sweetness. On its arrival, winged Love again took the laborer and with every joy of desire brought him to the queen.

The laborer, who spent much time “digging in the garden,” was actually Queen Chrysorroi’s former and never-forgotten boyfriend Kallimachos.

After rescuing Chrysorroi from a dragon, Kallimachos had managed, with considerable effort, to persuade her to have sex with him. Their affair didn’t begin with a drunken hook-up or a casual Tinder bang:

After some time, after many days, they formed the wish to unite their souls and they joined their hearts in indissoluble links, duly binding their love with most terrible oaths. Love, the king, was present at their words, received their oaths himself and wrote the contracts; contracts for which he stood between them as guarantor.

Christian marriage requires publicly witnessed vows. No one witnessed the pseudo-marriage of Chrysorroi and Kallimachos. Love the king in the above text is a personification and a moral rationalization. Many persons today engage in similar conceptual strategies, but with rather less literary sophistication.

Chrysorroi and Kallimachos found great pleasure from successful seduction. They went to a private pool and bathed together:

Only the tongue of Aphrodite could describe the pleasure and charms of their bathing. … He {Kallimachos} looked at her and, as he looked, he reaped the sweet fruits of pleasure. I mean something sweeter than everything sweetest. Time alone saw the remarkable sight, the pleasure beyond words, which they enjoyed in the pool.

After bathing together, they enjoyed delights together on a couch near the pool. They subsequently lived a life of amorous passion and bliss in Dragon Castle.

An inadvertent sighting and a witch’s spells destroyed the happiness of Kallimachos and Chrysorroi. One day a king saw Chrysorroi and Kallimachos leaning over the wall of Dragon Castle and enjoying the wonderful view. The King was immediately struck with love for the beautiful Chrysorroi. Beautiful women have incredible power over men. The King became desperately lovesick. He was willing to try anything to gain the love of Chrysorroi. A witch offered him her services. She conjured a scene of a damsel in distress. Kallimachos foolishly rushed to rescue the damsel in distress. Then, with a magic apple, the witch put Kallimachos into a death-like state. When Chrysorroi came to mourn over Kallimachos’s body, the King abducted her to be his queen.

I have seen her deceitful little game. The gardener’s laborer, the one who does the digging — she is embracing him, she is sleeping with him! I watched all this last night and I saw her playing  with him, kissing him, sleeping with him. O what a wicked and unnatural deed! But if you want to see the horror yourselves, spend this coming night in the garden. We shall sit together and wait. You will learn the tricks of this little whore.

The eunuchs hid themselves with the maid and saw Chrysorroi having sex with Kallimachos. They were horrified. The eunuchs reported their finding to the King. Chrysorroi and Kallimachos potentially faced severe punishment merely for resuming their passionate affair.

The lady was completely alluring. She inspired love. Her charms were beyond description, and her graces outdid those of the Graces themselves. Her hair flowed down in rivers of lovely curls and shone on her head with a gleam which surpassed the golden rays of the sun. Her body, which was whiter than crystal, beguiled the sight with its beauty as it seemed to blend the charms of roses with its color. Just the sight of her face alone shook your entire soul, your entire heart. Indeed, the lady seemed to be the image of Aphrodite and of every other beauty that the mind can conceive. But why prattle on? Why describe at length the beauty of her body? A few words would suffice to define it. All the women that the world has produced, whether before or after her — or her contemporaries — can only be compared to her charms as one might compare a monkey to Aphrodite.

Kallimachos and Chrysorroi l. 805ff, trans. Betts (1995) p. 53. That concluding comparison probably risked offending contemporary female auditors or readers. But Byzantium arguably had a more tolerant society than those in which the male gaze is disparaged, penalized, or criminalized.

Kallimachos’s bathing with Chrysorroi draws upon literary figures from the Greek Anthology. That bathing is not only pleasurable, but also therapeutic. Agapitos (1990).