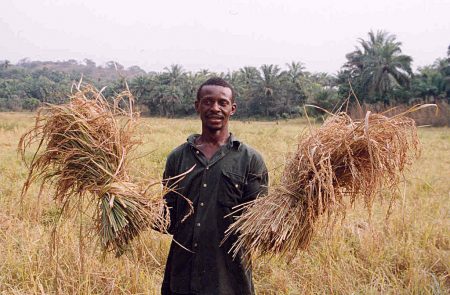 In the fourteenth-century Byzantine romance Kallimachos and Chrysorroi, a maid and three royal eunuchs caught Queen Chrysorroi having sex in the garden with her dragon-killing lover Kallimachos. Eventually Chrysorroi and Kallimachos came before the King for judgment and punishment. Kallimachos telling the story of his strenuous effort to gain the love of Chrysorroi saved them from being executed for adultery. The underlying romantic ideal is that men, but not women, earn love through their labor.

Chrysorroi, a strong, smart woman, led the case for the defense. She used the well-established rhetoric of setting out a hypothetical case (declamation) and questioning the judge (anacoenosis):

A man plants a vine with his own hands, hoes it, prunes it, puts a fence around it, weeds it carefully, tends it, spends the whole day with a sling frightening away birds who wish to destroy it, walks around by night to guard it. He suffers hardship and agony. At harvest time another man comes and seizes possession of it for himself. He harvests it and eats its fruit. As for the previous owner who planted the vine  and labored over it, the second man wants to kill him. Do you consider this just, or do you consider that the first owner should enjoy the fruits of his labor? [1]

I judge that the previous owner should enjoy the fruit of his toil and that the evil robber and thief should be beheaded to frighten others who might wish to do wrong or steal.

The audience applauded the King’s judgment and “praised the beauty of justice.” Chrysorroi then identified Kallimachos as a king analogous to the laborer in her hypothetical story. She analogized herself as the vine that he tended. The King hearing the case was the new owner of the vine, that is of his Queen Chrysorroi.[2] But she declared Kallimachos’s right to enjoy the fruit of his labor:

This {Kallimachos} is the king whom the witch rendered a corpse with her spells. This is the king who rescued me from my woes, who killed the dragon, who is my true lord. Whom did he wrong in enjoying the fruit of his labor?

The King was silent and shuddered in amazement. He asked about Kallimachos’s story. Having heard it, he generously disposed of Kallimachos:

The King then freed Kallimachos from his chains and gave him to Chrysorroi. The King, I think, felt pity because of Fortune’s cruelty and, bestowing on them a not undeserved favor, he ordered a detachment of the army to escort them wherever they wished.

While Kallimachos earned the right to love Chyrsorroi, she wasn’t given to him as property that he acquired through labor.[3] The King gave Kallimachos to Chrysorroi as if he were property. Men earning love doesn’t necessarily raise men’s social status.

The moral economy of love in Kallimachos and Chrysorroi parallels that of virtue. Virtue has as a root the Latin term for man, vir. Yet men aren’t naturally credited with being virtuous. Men must perform acts according to socially sanctioned criteria to be credited with virtue. For Kallimachos and his two brothers, virtue determined who would inherit their father’s kingdom. Their father said to them:

The one who shows great military valor, strength, intelligence, and proper wisdom, the one who acts the most kingly way, and gains a great trophy with his mighty exploits, to him shall I give the command of the empire, him shall I crown and make king in my place. [4]

Men must develop a sense of entitlement. Only very few persons can be a king or queen. But every man is entitled to love as a human being. Support men’s entitlement to love!

The Greek text (Καλλίμαχος καὶ Xρυσορρόη) is written in unrhymed political verse. External evidence indicates that Andronikos Komninos Vranas Doukas Angelos Palaeologos (Andronikos Palaeologos), a nephew of the Byzantine Emperor Michael VIII, wrote it between 1320 and 1340. Kallimachos and Chrysorroi has survived in only one early sixteenth-century manuscript. Kallimachos and Chrysorroi engages in sophisticated intertextuality with Chariton’s Chaereas and Callirhoe and is now appreciated as a “highly learned text.” Van Steen (1998); Agapitos (2015) p. 77.

The figure of a woman as a vine or garden has biblical roots. See e.g. Song of Songs 4:12-15. James 2:2-4 provides an example of a hypothetical case and ensuing question. Judicial rhetoric was a major field of study in Byzantium. Angelo (2010) p. 304.

[2] Merely from the sight of her, the King was struck with terrible lovesickness for Chrysorroi. With the help of a witch’s tricks, the King abducted Chrysorroi. He then made Chrysorroi his queen.

[3] The idea that women have been men’s property up until recent decades of liberation is a misandristic myth. Wilson & Daly (1992) has been influential work in such myth-making. See note [4] to my post on Sexual Coercion in Primates and Humans.

[4] Kallimachos’s two brothers turned back from attempting to confront serpents at Dragon Castle. The second brother prudently and comically observed:

I too shall flee these serpents. Unnecessary fighting with wild beasts is forbidden by both convention and good strategy.