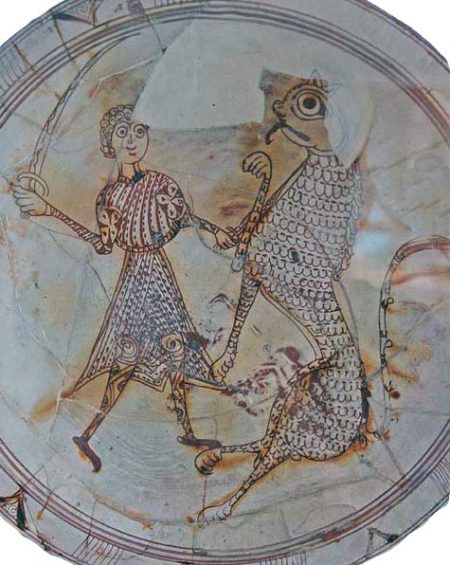 Dragon Castle was filled with gold, precious stones, and sumptuous furnishings. Yet the place seemed to be bereft of human beings. Amid all the splendor, Kallimachos felt lonely.

He entered a room made of gold. The gold and pearls of its ceiling depicted the heavens; the ruler Chronos, the father of castration culture; and the white planet of Zeus, Chronos’s son who would depose him. The star of Aphrodite glowed alluringly. The figure of Ares seemed to be frolicking with her. Athena, the goddess of wisdom, also appeared in the ceiling. Her figure apparently prompted the narrator only then to notice a solitary girl hanging from the ceiling by her hair.

After surveying the ceiling and upon seeing the girl hanging from her hair, Kallimachos froze in place like a stone. He was like a person viewing art:

He simply set his eyes on her and he stood there looking. He told himself that she too was one of the paintings. Such is the power of beauty to uproot the soul, to bewitch the tongue and voice, and to overwhelm the heart. Kallimachos stood gazing intently at the woman, at the many graces and great beauty of the maiden. His heart was wrenched. Saying nothing, he stood gazing at her with conflicting feelings. He was amazed at her beauty but he pitied her grief. In his shattered soul, he could only groan.

The girl hanging from her hair didn’t berate Kallimachos for the crime of the male gaze. She offered him practical, life-saving instruction:

This is the house, the abode of a man-eating dragon. Don’t you hear the thunder? Don’t you see the lighting? He’s coming! Go now, hide yourself. He is a dragon and he is strong. He is the offspring of a man-eater. If you conceal yourself in a hiding place and take care, with luck you will live. Look, you see the silver vessel lying there? Get down and crawl underneath it. Perhaps you may escape the dragon’s boundless strength. Go! Get down! Hide and keep quiet! He’s coming now!

As men generally do, Kallimachos followed the girl’s directions. From his hiding place, Kallimachos observed a fearsome dragon enter the room. The dragon flogged the girl from head to toe, ate a large, sumptuous meal, and then fell asleep.

Once the dragon was completely asleep, the damsel gave the hero further instructions. She spoke to the still-hiding Kallimachos:

Sir, are you still alive in your fear or are you dead? Do not be afraid! Show more courage! Come out. Abandon your fear if by chance you have survived the sight of my many tortures and the terror of the dragon. Come out now and quickly slay the beast.

The terrified Kallimachos emerged from his hiding place. He was silent and passive. The lady said to him:

Show no cowardice. This is your chance to kill the beast while it sleeps. and, for a start, to save your body and soul. You are wearing a sword. Draw it and strike the man-eater. Slay in your turn the one who has slain many human lives. Slay the bane of my entire heart.

Kallimachos stood up, sighed, and with a noble gesture valiantly raised his sword. He smote the sleeping dragon with all his might but the blow did not even wake him.

The maiden sighed disdainfully at the performance of Kallimachos’s sword. Then she gave him further instruction:

Throw away that wooden sword of yours or we’ll be slaughtered. Take the key on the pillow. You see the dragon’s cupboard there? Open it. You’ll find his sword. It has a magnificent ruby hilt. If you have the strength to draw it, if you do not tremble from fear but stand and strike with it, you will cut the monster in two.

Channeling his inner Odysseus, Kallimachos succeeding in drawing the dragon’s sword.[2] He struck the dragon with it and cut him in two. Kallimachos then freed the damsel hanging from her hair.

Kallimachos subsequently spent considerable time trying to chat up the girl. She, who was nude, was tearful and off-putting. Finally the lady said to him:

You see my poor body naked. First bring some of the clothes which the dragon hung up inside and kept after receiving them from my parents, and cover me with them. And carry out the greedy creature’s body as I hate to see its corpse even in death. Light a fire, turn it into fine ash, and then you will learn of my family, of my land and where I was born.

An enduring structure of gender oppression is requiring men to take out the trash, as if men as a gender are essentially connected to trash. Kallimachos lacked meninist consciousness. He thus followed the lady’s orders without a word of protest. With some additional seductive labor, Kallimachos eventually won the love of that damsel, the lady Chrysorroi.

The romance of Kallimachos and Chrysorroi probably was written in Constantinople between 1320 and 1340. Its story of Chrysorroi instructing Kallimachos on how to slay a dragon is obviously a romantic parody.[3] Its humor is heightened in contrast to the story of Digenis slaying a dragon in the Byzantine epic Digenis Akritis. The latter story probably dates from no later than the tenth century.[4] Digenis slaying a dragon would have provided well-known context for interpreting Chrysorroi instructing Kallimachos to slay a dragon.

For Digenis, slaying a dragon was merely a minor interruption to a mid-day nap. One day at noon, Digenis retired for a nap by a spring. His wife graciously sprinkled rose-water over him as nightingales and other birds sang. With Digenis sleeping soundly, his wife went to wet herself in the spring. A dragon attacked her and attempted to rape her. She shrieked, “Wake up, my lord, and rescue your dearest.” The sleeping hero responded to his damsel in distress:

The shriek rang in my heart,
and I promptly sat up and saw the intruder
(for the spring was straight in front of me on purpose);
I drew my sword and found myself at the spring,
for my feet ran swiftly like wings.
As I reached him he revealed a hideous apparition to me,
huge and terrifying to human eyes —
three gigantic heads, completely engulfed in fire;
from each it gushed out flame like lightning flashes;
as it changed its position it let out a thunderclap,
so that the earth and all the trees seemed to shake.
Thickening its body and drawing its heads into one,
growing thin behind and making a sharp tail,
at one moment coiling itself and then unfolding again,
it launched its whole attack against me.
But I, reckoning this spectacle as nothing,
stretched my sword up high with all my might
and brought it down on the ferocious beast’s heads,
and cut them all off at once. It collapsed on the ground,
twitching its tail up and down in its last spasms.
I wiped my sword and replaced it in its scabbard,
summoned my boys who where some way off
and ordered that the dragon be removed at once.
When this had been done at indescribable speed,
the boys ran back to their own tents,
while I went back to my couch to sleep once more,
for the sweet sleep I had been enjoying drew me back again
as I had not yet had my fill of it when I was first woken. [5]

As in Kallimachos and Chrysorroi, the dragon is associated with thunder and lightening. But unlike Kallimachos, Digenis responds quickly and acts on his own initiative. He slays the dragon easily, without the help of a woman’s instructions. He then directs a servant to dispose of the dragon’s body. Digenes wasn’t the sort of man who would act as woman’s servant in disposing of trash. Compared to Kallimachos, Digenis was a less modern sort of hero.

Men as a gender should not be assumed to have exclusive responsibility to slay dragons. The most dangerous dragons today are cultural. Women and men can best slay these dragons by recovering a sense of humor and being brave enough to laugh.

[3] Highly learned scholars have failed to recognize the parody. Cupane astonishingly declared, “Kallimachos is a hero and has to behave as one.” Cupane (2014) pp. 194-5. This misreading may have been driven by Manual Philes’s near-contemporary 161-verse allegorization of the story of Kallimachos and Chrysorroi. On that allegorization, id. pp. 196-7. Cupane more generally declared that the Byzantine vernacular romances are not parodies. Id. p. 193.

Byzantine literature has an undeserved reputation for tediousness. Kazhdan, Sherry & Angelidē (1999), Ch. 7, doesn’t do enough to dispel that misunderstanding. Alexiou (2002), pp. 129-48, on Ptochoprodromos provides better insight. Ptochoprodromos on an abused husband even rivals Lamentationes Matheolulus in raucousness and wit.

A man is walking down the street when a neighbour runs up to him and says, ‘Hey, your house is on fire!’ ‘Don’t worry,’ replies the man, ‘I’ve got the key.’

Haldon (2002) p. 64. Halsall, the editor of the associated volume of essays Humour, history and politics in late antiquity and the early Middle Ages, declared:

Halsall (2002) p. 1-21. Chrysorroi, while hanging by hair, instructing Kallimachos on how to deal with a dragon is surely funnier than that joke.

[4] The epic Digenis Akritis probably originated in an oral tale in Byzantium in the ninth or tenth centuries. The epic apparently never was established in a canonical text. Jeffreys (1998) pp. xxx-xli, lvi-lvii.

Kallimachos and Chrysorroi uses the word δράκων for the monster. Betts translates that word as “dragon.” For discussion of the translation issue, see Betts (1995) p. 35. For consistency in the above quoted translation of Digenis Akritis, I’ve substituted “dragon” for δράκον in place of Jeffreys’s “serpent.”

[image] Digenis Akritis fights dragon. Zeuxippus ceramic decoration, scratched on slip and under the glaze (sgraffito). Dated late-twelfth / early-thirteenth century. Found in Kherson, Ukraine. Preserved in Hermitage Museum (St. Petersburg, Russia), inventory # X728. Image thanks to Qantara. I’ve modified the image to obscure some obtrusive photographic glare. Other images of Digenis fighting a dragon exist on a Byzantine dish and a Byzantine plate, both dating from the twelfth century.

3 thoughts on “damsel instructed hero on how to slay dragon”