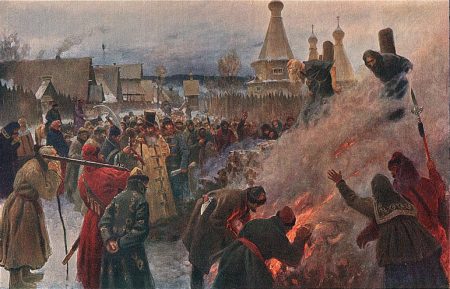 The extent of criminalization of men and violence against men easily prompts despair among the warm-hearted. In twelfth-century Byzantium, the eminent writer Theodore Prodromos apparently turned to macabre comedy as a remedy for despair. In his novel Rhodanthe and Dosikles, Prodromos described bizarrely reverberating violence and vindication through fierce inquisitorial fire.

Kratandros fell in love with his neighbor, the maiden Chrysochroe. He revealed his flame for her through a messenger. She agreed to marry him. They arranged secretly for him to come to her room on an appointed evening. Then they would give and receive pledges of love in person.

The lovers’ attempt to meet generated macabre comedy. With images used in figuring the seduction of a virgin, Kratandros reported moving forward:

when I approached the gate at the entrance,
I opened the doors that were shut,
drawing back their wooden bolt,
and putting forward a quiet foot
I hastened to make my way to Chrysochroe. [1]

Unfortunately the door-keeper noticed him. She called Chrysochroe’s father from bed and summoned fellow servants to violence against Kratandros. He was guilty of nothing more than loving Chrysochroe and acting to fulfill mutual arrangements for a meeting. Facts matter little in criminalizing men for loving women:

they all immediately rushed off to catch
the escaping intruder and kill him with clubs and stones.
One clasped in his hands a club
or rather one or other of the doorposts,
another dug up the house or tore it apart
and seized a hand-sized stone in both his hands,
all — armed with whatever they chanced on —
threatened noisy violence to this disturber of the night. [2]

Tearing down one’s house to attack, without questioning or immediate danger, a fleeing man represents a ridiculous over-reaction. It’s as ridiculous as claiming that nearly a quarter of men admit to being rapists. Yet many today respond to such literature only in the crudest of ways. A more humane response is laughter within a sense of despair and absurdity.[3]

Subsequent events heighten a comic sense of despair and absurdity. What happened, according to Kratandros’s telling, is inconceivable:

And nowhere chancing on Kratandros
(would that they had; what point is there in my continuing to live?)
their good aim was a mis-hit at the maiden.
For Lestias’ ill-judged fist,
hoping for Kratandros,
miserably slew — alas, alas — the miserable Chrysochroe,
shattering her head with a huge stone.

No one engaged reason to understand and judge the events. Chrysochroe’s father believed the false accusation and condemned Kratandros:

O accursed Kratandros, all-daring insolence,
implacable robber, savage-souled being,
how could you destroy such a maiden
by stealth, craftily, wilfully, heartlessly?
I am amazed and astonished
that the rock did not turn back on itself
(having acquired natural understanding)
to kill the thrower with a just judgment,
but it wilfully struck Chrysochroe.
And you, despoiler and slayer of the girl,
may you undergo a deserved death in the future,
…
and having slain my daughter
with a dreadful blow from a most accursed stone,
you — unhappy one — will expire pitiably, crushed by stones.

Like men who believe in patriarchy, Kratandros blamed himself for the terrible injustices:

Alas, wretched father of a wretched daughter,
it is I who have deprived your offspring,
your maiden, of life and dear existence.
Accuse me of your daughter’s death,
summon me to the tribunal and seek judgment,
drawing me, dragging me to the lawgivers’ houses,
demanding the penalty deemed right by the laws.
It is generally decreed, as you have just said,
that he who strikes with stones should be struck with stones.
I myself would yearn for death by stoning
since Chrysochroe died from a stone.
Let the hand of Lestias alone slay me,
which accursedly killed the maiden.
Do not be slow to charge me with murder;
for I long to go to where Chrysochroe is. [4]

That response is sadly characteristic of men. While men have no reproductive rights whatsoever, many men worry deeply about perceived threats to women’s reproductive rights. While four times more men than women die from violence, many men believe that violence against women is the most pressing human rights issue in the world today. Men don’t value their own intrinsic human being.

A fierce inquisitorial flame fantastically delivered justice to Kratandros. Chrysochroe’s father, probably urged on by his wife, had Kratandros summoned before the tribunal on a charge of murder. Chrysochroe’s father appealed to the court for Kratandros to “at least suffer a rock-borne death.” With Kratandros moving forward to plead guilty, his father, perhaps acting according to his wife’s order, intervened. He rightly called the murder charge “fabricated.” Given pervasive judicial bias against men, Kratandros’s father turned to the fantastic option of trial by fire.[5] Attendants of a goddess’s temple lit a fire “seven times more fierce than usual.” Kratandros recounted:

So the temple attendants lit the fire
and requested the murderer to enter it.
When I went into the middle of the flame,
I trod on the fire and stayed within it, unburnt.

Kratandros was thus found innocent of murder. As Kratandros’s dear friend Dosikles said, what a “strange and wonderful matter.”

The innocent maiden Chrysochroe had her head crushed by a stone intended for the head of an innocent, loving man. Perhaps eventually the rock of misandry will turn back on its throwers. That may be humanity’s best hope for justice.

[1] Theodore Prodromos, Rhodanthe and Dosikles ll. 1.173-77, from Atticizing Greek trans. Jeffreys (2012) p. 25. Prodromos was “perhaps the most versatile, inventive, and prolific” writer in Byzantium in the first half of the twelfth century. He probably wrote Rhodanthe and Dosikles in Constantinople in the 1130s under Byzantine Emperor John II Komnenos. This novel imitates settings and plot elements of ancient Greek novels, particularly Heliodoros’s Ethiopika and Achilles Tatius’s Leucippe and Clitophon. Rhodanthe and Dosikles is in nine books of twelve-syllable iambic verse. Prodromos probably presented parts of it in oral performance at the imperial court’s theatron. Id., introduction, pp. 3-14.

A gate with shut doors poetically figures a virginal womb. In the Hebrew bible, a foot is a figure for a man’s penis. Byzantine novels include “clever genital innuendo.” Kaldellis (2007) p. 266.

In American public life, only comedians may hint at the truth. They are allowed this by the guardians of opinion because their apparent lack of seriousness places them outside the realm of consequential political discourse; it also transmutes our indignation into laughter, neutralizing it. So too with “Hellenic” satire in Byzantium. The fiction of rhetorical imitation and satire’s conciliatory foolishness diffused the implied challenge to Orthodoxy and the court.

Kaldellis (2007) p. 276. Prodromos was far more perceptive, daring, and sophisticated than popular comedians in American public life today. At the same time, orthodoxy today is more oppressive and more ridiculous than it was in Byzantium.

[4] In an astonishing analysis of these events, MacAlister declared:

Although technically innocent of Chrysochroe’s murder, Kratandros had expressed his responsibility for it and so, like certain characters in the ancient novel, had pleaded guilty at the subsequent murder trial in the expectation that the penalty would be death (1.347-49). But unlike the ancient novel situations where the pleading character provokes death and voluntarily pleaded guilty to a crime for which he or she is invariably totally innocent, the situation here is one in which the pleading character willingly pleaded guilty to a crime for which he does carry some guilt: had Kratandros not been secretly visiting the maiden, the uproar which had caused her death would not have taken place. Prodromos thus dispels any idea of voluntary provocation of death by the fact that, in the final analysis, Kratandros could be considered ultimately responsible for the murder.

Dosikles latter echoes Kratandros’s unwarranted self-accusation of murder. After a storm in which the pirate ship carrying Rhodanthe captive vanished, Dosikles imagined that she was dead. He declared, “it is I who am your murderer, not the tempest.” Rhodanthe and Dosikles l. 6.350, trans. Jeffreys (2002) p. 107.

Prodromos may well be engaging in satire of Christian and imperial orthodoxy. Kaldellis (2007) pp. 270-6. But Prodromos’s satire of gynocentrism is more daring and more interesting. Prodromos’s novel “shows clearly with what artistry and subversive irony old topoi can be reinvented and presented.” Cupane (2014) p. 188.

[5] Trial by fire was not practiced in Byzantium. Jeffreys (2012) p. 31, notes 36-8, which cite Heliodoros 10.8-9 and Daniel 3.19-24 for comparison. Kratandros’s trial by fire differs significantly from the Heliodoros 10.8-9. The latter describes a trial of chastity by stepping on a burning gridiron. In Daniel 3.19-97, King Nebuchadnessar had Shadrach, Meshach, and Abednego thrown into a fiery furnace for refusing to worship a golden statue. They walked around in the flames and remained unburned while joyfully praying to their god, the god of Jews and Christians. In context, Kratandros’s trial by fire functions within the twelfth-century Byzantine literary practice of “mixing the unmixable.” Roilos (2005) p. 237 (in Ch. 4, “Comic Modulations”), citing the late thirteenth or early fourteenth-century critique of Timarion by Konstantinos Akropolites.

MacAlister, Suzanne. 1996. Dreams and suicides: the Greek novel from antiquity to the Byzantine Empire. London: Routledge.